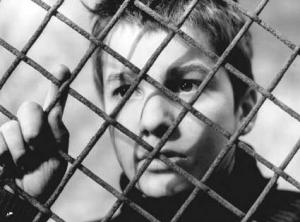 "There is always one moment in childhood when the door opens and lets the future in."
~ Graham Greene

Truffaut applies the writers dictum of 'write what you know' to film, and he picks a 'very good place to start', his unhappy childhood. I came to The 400 Blows  years ago not knowing the French slang connotations of the title. I assumed for some time after that it was an allusion to the 'school of hard knocks' that the central character Antoine was growing up in. Even now I know it means 'to raise hell', I feel its literal English interpretation has some validity given the slings and arrows Antoine suffers, physically and emotionally. For those of us that had the fortune to enjoy an idyllic childhood this is a tough film to digest. Truffaut eschews sentimentality, intuitively knowing that the 'reportage' approach needs no melodrama or manipulation for effect when the central dilemma is so compelling.

The film opens with a jaunty Paris travelogue sequence, over which a saccharin score evokes every cliché in the book. Truffaut seems to be saying, 'so you think this is Paris? I'll show you the real Paris'. We settle in a classroom scene, so familiar it could be any number of places across several eras, where Antoine is immediately a victim of circumstance and takes the punishment on behalf of his classmates, later staking his territory by scrawling his innocence on the wall. It's an important statement of defiance, and sets the tone for how Antoine sees himself. Any French film involving schoolboys can't help but evoke Vigo's Zero Pour Conduite,  almost 30 years prior, and some of the playful aspects of The 400 Blows  have some of that tone, the later slapstick street march with the physical education teacher particularly. If there are echoes of any other director in Truffaut it has to be Renoir. While his peers like Godard and Malle were re-envisaging US noir type scenarios for their debuts, or looking outward, Truffaut was turning the microscope inward (pure Renoir) so even when social politics is involved, it's via the prism of the personal.

Truffaut takes incidents from his own life and others he'd heard about from schoolfriends and weaves a haunting web from the accumulated shards. Clichés are revealed to be multi dimensional, lovers kissing on the streets of Paris may be a postcard to some, but for Antoine, who stumbles across his mother and another man, it's a stark betrayal. The strands that tenuosly hold life and soul together for this indominatable child seem at peril of unravelling at any time. Antoine experiences the agony of an overheard conversation between his mother and step father where he's treated as if he's an annoying dog to be found a home so they can get on with the lives that his presence is preventing them from leading.  This is of course their own pain projected onto their son,  his mother is constantly disappointed by a life she obviously expected more from. Truffaut casts Claire Maurier who has a kind of fading allure to subtlely underscore the lost promise of beauty. We later learn to heartbreaking effect that she'd wanted to abort Antoine who owes his life to his Grandmother's refusal to support such a course of action. As bleak as these moments are, Truffaut leavens the mix with stolen moments of bliss. Antoine and his friend Rene spend a day skipping school, enjoying the delights of a funfair and its siren tune, but maybe knowing they'll be paying the piper soon enough.

Truffaut repeatedly reinforces that it's a flimsy thread holding the component pieces of Antoine's life in place. Between disasters at school, and threats of enrollment into the military at home, there's a constant unease at how solid a base his life has. His step father is equally unable to satisfy his mother and Antoine just seems a complication neither of them want. Even a happy time going to the cinema with his parents, one of the only joys in his life, soon fades when an excuse for washing their hands of him eventually presents itself.

The film is carried manfully on tiny 15 year old shoulders by Jean-Pierre Leaud. Truffaut was so impressed with his audition piece he wrote to JP's writer-director father Pierre, offering him a central role, not yet having decided if it would be that of Rene or Antoine. The naturalistic performance centres the film and leaves it free of artifice. Truffaut traces Antoine's life with his documentary style camera always observing as an outsider, but in reality it is Antoine who is the ultimate outsider. He appears to be outside his own life and wants desperately to get in, therein lies the tragedy. His parents force him away emotionally at first, and ultimately physically, leaving Antoine to fend the various fates and blows alone. An attempt from his only real friend, Rene, to visit him at the institution fails, and Antoine takes matters into his own hands. Truffaut beautifully sums up the entire piece in the last sequence, finishing with the famous, startling freeze frame, so expressive and so ambiguous, a young boy cut adrift by his carers and facing the world alone. Incredibly the shot seems to suggest nothing less than an existential crisis, and Antione's stare, both accusing and questioning, draws us into the uncomfortable realisation of our own complicity in the everyday tragedy.

Truffaut didn't change cinema in one fell swope, he just re-focussed attention on what he considered important, and had a huge and  justifiable impact. He cleared the cobwebs and reminded everyone of the value of 'personal' cinema, the universality of the human experience and created a humanist tract to sit with the best of Renoir. Truffaut nailed his cinematic treatise to the Cathedral door with a film that trancends all trends and fashion and is destined to remain one of the most valuable cinematic documents we possess. 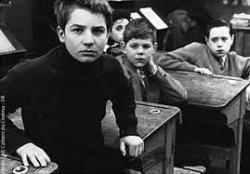 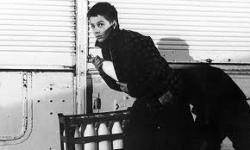 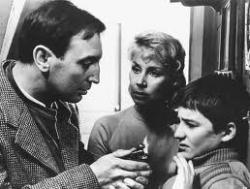 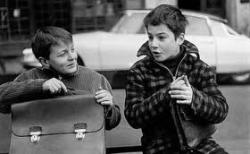 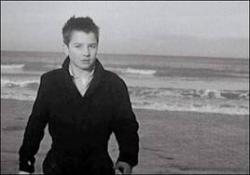