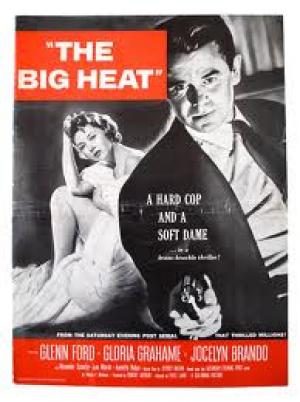 Fritz Lang continued to produce vital and deceptively simple films in the USA long after Hollywood had written him off as a journeyman director. One of the giants of German Expressionism, Lang fled Hitler and his cronies for the freedoms of Hollywood, ironically consigned to low budget or 'B' picture features soon after. Lang's ethos of spare, elegant and psychologically driven narratives meant that he was at the vanguard of defining and codifying what would come to be known as Film Noir, and 'The Big Heat' may be the pinnacle of Lang's noir achievements. Paramount's cinematographic legend Charles Lang (Borzage's ' A Farewell to Arms') shot the film, his experience with noir bulked up by a recent stint on Billy Wilder's 'Ace in the Hole'. Glenn Ford (the pick of the Columbia contract players available to Lang) and Gloria Graeme took the lead roles, as they would for Lang in his 'Human Desire', a noir re-make of Renoir's 'La Bete Humaine', in the following year.

Dave Bannion (Glenn Ford) is a good cop, frustrated by all the corruption around him as wealthy mob boss Mike Legana has effectively bought off his superiors. In the course of a routine investigation into a fellow cops apparent suicide Dave discovers links that hint at Legana's involvement, but is told to back off by his boss. Dave takes his troubles home to his lovely and understanding wife Katie (Jocelyn Brando), who backs his decision to stand on his principles. Dave's personal and professional worlds collide spectacularly and he transforms to become a man out for vengeance. Mobster's moll Debby (Gloria Graeme) liked the way Dave stood up to her thug boyfriend Vince (Lee Marvin), sympathises with his plight, and puts herself in danger in doing so.

Lang's ability to depict the dark underbelly of society was legendary, and noir as a genre suited his artistic aesthetic perfectly. America had to face a new kind of 'corporatised' criminal in the wake of the post-war consumerist boom, one that was as organised and professional as any company on Wall Street. It shocked the complacent middle class to think that mob bosses had police and authorities in their back pockets, but the line between the cop and the crook has always been a thin and uncomfortable divide and if money could buy everything in a capitalist system, then why not the law as well? Dave, transformed into a rampaging and ugly beast by events, is scathing with his superiors, "You frightened excuse for a cop". Lang examines the vendetta, exploring what it means when in order to kill the monster you must become the monster. "There'd be no difference between you and Vince" says Debby, commenting on Dave's decision not to take the law into his own hands, as even though Dave is bent on revenge his principles still guide his actions, and so allows him to hold on to some fragment of his true self.

'The Big Heat' has several remarkable perspectives on the era in which it was made, and especially unusual for American mainstream cinema. The violence and darkness is acute, and Lang rams it home by setting up objective juxtapositions, i.e. Dave reading to his little girl in bed, a benign and idealised image, as his car explodes in the driveway. An elaborate and ornate society dance is interrupted by Dave punching out Lagana's henchman and most famously a boiling coffee pot in an apartment becomes an implement of brutal force in the hands of Vince. Lang's extensive use of mirrors suggests that each person has an alternate self, that Debby has a 'good' woman waiting to emerge, or that Dave has a dark side, a shadow 'Dave' waiting for his chance to take action.

The women characters are unusually strong in the film, and suggestions are made of Dave's ideal wife being "a holy terror at night", a remarkable sexual innuendo in an era where any depictions of married couples involved two single beds. Debby is a confident and self-aware woman, and asserts her right to determine her own destiny. Dave represents a chance for her to break away from the criminal milieu in which she's been immersed and she takes it with both hands. Lang keeps her dialogue snappy and crisp and the scene with her in Dave's hotel room, on his bed, is very sexually charged. The widow of the dead cop, Mrs Duncan, is a strong, forceful and nasty piece of work, and Jeanette Nolan has a field day in the part, making it clear that she'd known, approved and possibly directed her husband's corrupt activities.

Glenn Ford delivered a fine performance as the honest cop caught in a spiral of violence and corruption, and more often than not the parts didn't measure up to the ability he possessed. Lang uses a nice in-joke when Dave enters a nightclub, having the band play a version of 'Put The Blame on Mame', from Ford's biggest hit 'Gilda'. Ford represented an old fashioned aesthetic in the era of the method actors, but this was a plus in the case of 'The Big Heat', where he appears as a kind of throwback, a deliberate invocation of the stoic male of pre-war films. Speaking of the method era, it's Marlon Brando's sister Jocelyn who plays the wife, and she's wonderful in the part, if under used, it's a pity her screen career never took off. Gloria Graeme, on the other hand, was in the middle of a streak having won the Academy Award the year before for 'The Bad and The Beautiful'. Graeme stands as one of the icons of Film Noir actresses, with Dmytryk's 'Crossfire', Nic Ray's (one of her husbands) 'In a Lonely Place', and Lang's 'Human Desire' all top shelf entries.

'The Big Heat' of the title evokes the cleansing rain Travis Bickle would yearn for 20 years later, as Dave imagines a cleansing heat to rid the city of the stench of corruption, "the lids off the garbage tin", he tells Debby. Lang understood, like Hitchcock and Renoir, that reality is best understood in a slightly heightened or non-realistic way. Lang's noir films avoid a documentary realism, they evoke a kind of dream world, an alternate universe where action is exaggerated or oblique, and is therefore more revealing of human nature and it's attendant vanities and foibles. Debby's looks are her currency, and Lang has many shots of her admiring herself in the mirror, and once she's lost them she's effectively a pauper, and behaves like she's lost everything. Dave's scars are not as visible as Debby's are, and Lang reminds us of the cost of meeting darkness with more darkness.

Lang was blacklisted for a period in the early 1950's, apparently for his collaboration with communist Bertolt Brecht on the anti-Nazi 'Hangmen also Die', ironic when you consider Lang had fled the Nazi's for the 'freedoms' of America, but Harry Cohn had the good sense to sign him to a two-picture deal with Columbia. Justly lionised for his German era classics, the seminal 'Metropolis' and the searing 'M', Fritz Lang's American output gets scant regard in some quarters, but films as good as "The Big Heat' are reminders that the master was still at work. 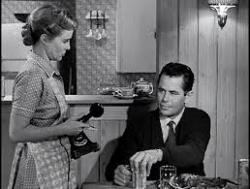 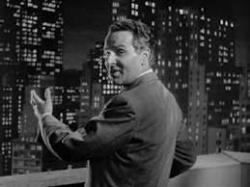 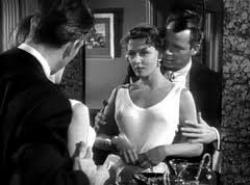 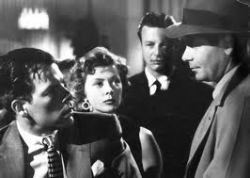 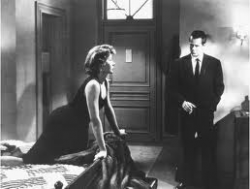 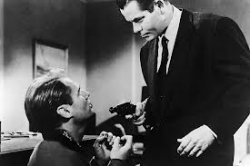