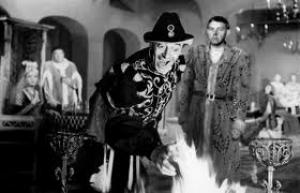 Marcel Carné made this film under the watchful eye of the occupying Germans, who controlled the French film industry, such as it was, in 1942. Dr Albert Grevin, installed as the head of Continental Films by Joseph Goebbels to control the suitability of projects, proceeded to run the French industry like a Hollywood mogul, controlling all aspects of production from script to final cut. Greven bluffed Carné into signing a contract with Continental, and Carné then set up in the southern 'freezone', under the aegis of the Vichy government. Jaques Prevert, Carné's frequent collaborator, wrote a script based on a 15th Century legend of the Devil sending two envoys to earth to spread havoc and despair, and Carné had an elaborate set built. Resources were scarce but he scratched around for appropriately elegant costumes to fit the period, and even though he had to borrow the horses and paint the food with a toxic dye to prevent the extra's from eating it, he managed to provide a lush and elegant backdrop to a medieval fantasy.

Two riders, envoy's of Satan himself, Gilles (Alain Cuny) and Dominique (Arletty) approach a castle, dressed as minstrels. They arrive and speak to an Executioner, who takes a shine to them, possibly sensing them to be agents of death, like him. The castle is busy with a feast to celebrate the engagement of the Baron's daughter Anne (Marie Déa) to Renaud (Marcel Herrand). Gilles plays a tender love ballad, Anne is immediately smitten by the charming minstrel, a contrast to her brutish and war loving fiancé, and jealousy rears it's ugly head. Dominique turns her attention to both the Baron (Fernand Ledox) and Renaud, eventually having them duel each other for her affections. All is going to plan but Gilles falls in love with Anne and the Devil (Jules Berry) intervenes to set things back on course.

Prevert's tale and Carné's realisation of it are amongst the most blindly romantic visions of love ever committed to celluloid. After the contemporary fatalism of masterpieces like 'Port of Shadows' and 'Le Jour se lève', the setting provides a level of detachment and perspective, but also an affirmation of the universality of love and of it's enduring characteristics. Arletty plays the temptress superbly, adding a layer of ambivalence and edge, utterly bewitching and wicked. Apparently, a scene where she watched and laughed as the Baron went to his death was deleted from the final version, more's the pity. Berry hams up his Devil shamelessly, but the effect is comic and appropriate, as he impishly weaves his evil thread. The film however belongs to the lovers, and Alain Cuny and Marie Déa both render wonderful characterisations, tender and heartfelt, the premise hangs on the fact their love is stronger than death, and they pull it off magnificently.

Carné chose to steer away from conflict with Greven and any controversy with the regime by finding a romantic story removed from contemporary issues. Goebbels had famously declared Carné's 'Port of Shadows' "decadent", so he was on the Nazi's radar. Prevert focuses on the triumph of love in the face of all the odds, even in the face of the Devil himself, which led to the film being read as an allegorical response to the occupation. Audiences mostly saw Jules Berry's Devil as a version of Hitler, and his thwarted ambitions regarding the lovers as proof France would eventually triumph, but Carné himself said this was not their intention. That said, whatever subliminal forces that were at work with Prevert and Carné that set them to choose the subject of a battle against evil set loose in the world, it leaves the interpretation as some level of 'resistance' metaphor as valid.

Another factor of the occupation was the banning of allied films, so France effectively had to fill the vacuum created by not having Hollywood and British films on local screens. The evidence is that the French industry mimicked some of the tendencies that were usually associated with Hollywood productions, and given the circumstances a retreat to fantasy and escapism was not only understandable, it was probably beneficial.  Carné had the added difficulty of 'hiding' the work of some his usual key crew members because they were Jewish, including composer Joseph Kosma and set designer Alexandre Trauner. The Nazi's siezed any cinema's that were owned by Jews and forbade them to work in the industry, and Prevert famously told Greven his plans for world cinematic domination would fail, "because you don't have the Jews".

Marcel Carné enjoyed a huge success with 'The Devil's Envoys', a salve for a war weary pubic who flocked to see the 'beating heart' of France in huge numbers. Carné's confidence that good cinema could still be made under the occupation led to him and Prevert creating their undisputed masterpiece, 'Les Enfants Du Paradis', one of the sublime achievements of world cinema, and something for Dr Greven to envy. 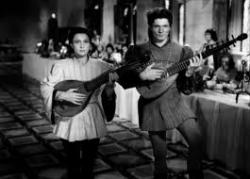 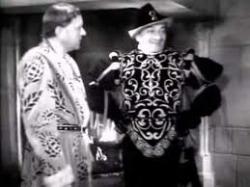 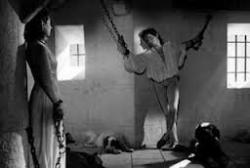 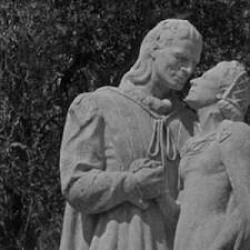