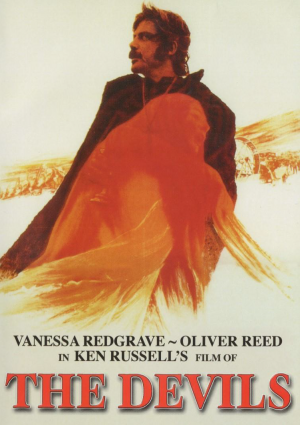 ‘The Devils’, Ken Russell’s self-acknowledged most political film is set in a period where church and state were effectively the same thing and centres on the true story of Gallic priest Father Grandier of Loudun. Russell wrote the screenplay based on two sources, the play ‘The Devils’ by John Whiting, itself based on the second source Aldous Huxley’s book ‘The Devil’s of Loudun’ which is an account of the events of 1634 in the fortified French town. The town was suspected of being a Heugenot, or Protestant stronghold by the Catholic King Louis XIII and Archbishop Richilieu who both desired that it’s significant fortifications be demolished so that it could never be used as a provincial sanctuary against a centralised government. The town had also enjoyed the protection of the monarch under it’s Govenor and after his death from the plague power is passed to Father Grandier, therefore Louis needed a pretext to break his word.

Grandier (Oliver Reed) is typical of many medieval clerics, including Popes, enjoying privilege and power and the delights of the flesh whilst hypocritically professing abstinence, piety and humilty to their flock. Grandier is a charismatic and educated man, well connected, good-looking ‘a man worth going to hell for’, popular enough to stop a fortification demolition team led by Baron de Laubardemont (Dudley Sutton) sent from Richelieu, in their tracks. He strides through the town like a rock star celebrity, vain and self-assured and barely registering the pain of the women he uses for his pleasures when things go wrong. Many women in the town are infatuated with the priest, none (nun?) more so than the Mother Superior of a local order Sister Jeanne (Vanessa Redgrave) who berates other nuns who share her interest, but indulges in extreme masturbatory fantasies over Grandier in private. Grandier meets Madeleine (Gemma Jones) who has been treating plague victims and finally has met a woman in whom he can invest the kind of devotion he has heretofore kept for his God. Grandier secretly marries his love, but gossip reaches the ears of Sister Jeanne and she decides to wreak a horrible revenge by accusing him of visiting the nuns in demonic form at night and raping them.

The Baron leads the charge against Grandier, with the help of ‘professional witch-hunter’ Barre, and after it seems the case may falter due to public support for Grandier the tide turns after a series of public exorcisms convinces people that the devil is indeed extant in Loudun. Grandier and his wife have been away from the town, their love and committment to each other contrasted against the chaos of the exorcisms and the mass madness they’ve induced. In the middle of the insanity the King arrives, disguised as a lesser noble and offers an actual relic of the saviour as a device to effect a cleansing of the demons, Barre holds the ornate case in which it’s housed, invokes it’s power and the women come to their senses. The King then delights in showing Barre the contents of the box, it’s empty. Pandemonium breaks out again leading to the famous ‘rape of Christ’, the attack by sexually demented nuns on a life sized statue of Jesus. The empty box reminds us of the fatuousness of claims to power over the ‘realm of the invisible’, a scam that pre-dates Christianity but once you have people convinced of this then, pardon the pun, the sky’s the limit.

Grandier returns and a show trial is held, the verdict pre-determined under Richelieu’s influence. Grandier is tortured but refuses to confess to any of the charges. Sister Jeanne attempts suicide out of guilt at persecuting an innocent man and her recanted testimony is dismissed as further evidence of the devil at work, this time trying to clear his minion Grandier. After extensive and brutal torture the most Grandier will admit is ‘I have been a man, I have loved a woman’ having earlier made the point to Madeleine that there was no Biblical proscription against clerics being married, Grandier’s battered and tortured body is led away, enduring his own personal stations of the cross on the way to his ‘cruxifixion’, being burned at the stake. As the flames consume him Russell shows us the bloodlust filled townsfolk from Grandier’s perspective, looking like they are the one’s being consumed by the fires of hell. Sister Jeanne is still mesmerised by thoughts of Grandier and the Baron brings her a souvenir from the ashes, a charred bone conveniently shaped like a phallus that she uses for further masturbation. With the nun still possessed by demons of her own making Madeleine is released to walk away from the now felled walls of Loudun.

Russell has used the story to comment on the abuse of power by the state against it’s citizens in a way that contrasts one man’s principles and ideals against authoritarian repression and persecution. A population that has been kept in ignorance and conditioned to accept Church authority over ‘supernatural’ events is one ripe for exploitation from the likes of Richelieu and Russell was keen to point out the silmilarities to ‘brainwashing’ that we would now associate with modern day cults. Taking his lead from Huxley that the exorcism of the nuns resembled a ‘rape in a public lavatory’, Russell pushes the edges of his style of cinema by incorporating a stunning set design from Derek Jarman onto a canvas that is both vast and intimate. Russell employs surreal costuming and dark humour to further sweeten the pot, heightening the grotesqueries of his representation of officialdom, the King’s ‘shooting’ scene has to be seen to be believed, and add to this the brilliant and challenging score by Peter Maxwell Davies and the result is simply breathtaking.

Condensed to the personal, the film is about the liberating power of ‘pure’ love on the one hand versus the destructive power of obsessive love on the other. Oliver Reed gives a nuanced performance (yes, the same man who became a caricature sad drunk, talk-show regular) as Grandier, a man who finds a love worthy of his earthly focus ‘from lust comes pleasure, from pleasure comes love’ was his creed, stating that even ’lily’s decay into rotten-ness’. His philosophy was that human love is cheap when compared to divine love and he was not confusing the two, taking his pleasure where possible and expecting that kind of beauty to fade. In Madeleine he finds a ‘pure’ love and it affirms his spirituality in a way that deepens it’s worth, something he hadn’t thought possible. Vanessa Redgrave gives a remarkable performance as Sister Jeanne, disfigured in spirit and in flesh, she taps into the evil that dwells in a twisted mind when obsessive love is not returned. Her faith was a cultural one in that Russell makes the political point that the kind of women who were nuns were so because of economic circumstances not from devotion or vocation. Sister Jeanne’s belief descends to the depths, a darker spirituality made even more base, and if any then she is the Devil’s tool, not Grandier. The film affirms that , for better or worse, both love and evil are human achievements, The Catholics all too eager to give the credit for the former to their invisible wizard and the culpability for the latter to the human race.

From this distance it seems, remarkably, that Russell had less trouble with the release than the Python’s would a few years later with their comic masterpiece ‘Life of Brian’. The censors were not kind and several cuts were made but on the whole the film itself was not accused of blasphemy, and in an era now where ultra-violence is the new porn it’s hard to see what the fuss was about all those years ago. One shouldn’t forget the great humour also that resides in the piece, although it’s themes are weighty Russell is happy to take the piss when needed and uses his minor characters as some light relief in almost Shakespearian comic turns. What did people expect, a kind of Spanish Inquisition?? 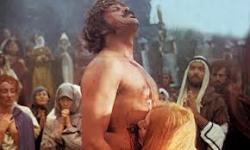 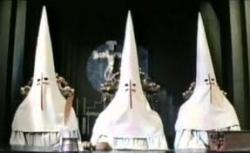