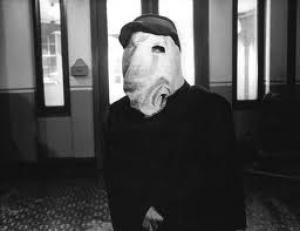 Lynch delivers mainstream surreal tone poem (as you do)

After his startling and unsettling feature film debut, Eraserhead  in 1977, David Lynch continued his exploration of the abnormal or 'freak' mutations humanity sometimes throws up in a more formal and visually elegant way with The Elephant Man.  Lynch had sourced the story of a Victorian era surgeon and his odd case study, John Merrick, from a choice of scripts on offer after he failed to get his own project, Ronnie Rocket  funded. produced Mel Brookas, yes thhe Mel Brooks, said he saw something in the tone of Eraserhead that gave him confidence that Lynch could bring Frederick Treve's 1923 book, The Elephant Man and Other Reminiscences,  successfully to the big screen. Mel Brooks' wife of many years, the supremely gifted Anne Bancroft took a small but crucial role as a result. Lynch chose to shoot the film in stunning black and white and he partnered with veteran cinematographer Freddie Francis, who had directed some Hammer films in the '60s but had notably filmed the elegant gothic horror, The Innocents  for Jack Clayton, and the British New Wave entry Saturday Night and Sunday Morning for Tony Richardson.

Frederick Treves is a surgeon at the London Hospital, and during his scouting of the freak show corner of a side-show he encounters John Merrick, a man being exploited for his gross physical deformities. Treves pays for Merrick to be examined by him for a presentation at the Medical College, assuming him to be an imbecile, "At least I pray he is",  and then delivers him back to his handler, the slimy Bytes (Freddie Francis). After being informed of John's mistreatment at Bytes' hand, Treves rescues John as he would a beaten dog and gets him a room at the hospital. John's fortunes continue to wax and wane and the arc of the film is of Treves discovering, along with the audience, that there is indeed a man underneath the monstrous exterior.

Lynch cannily lays out his argument pro and con in a multi-dimensional fashion, which gives the film it's intelligence and stops it from being overwhelmed by sentiment. John superficially resembles a monster from the id, causing deep anxiety in most people who view him, his chances at anything approximating a 'normal' life were cruelled from birth. Orphaned at age 13 and with limited education and few prospects he resorted to being an exhibit in a freak show. With little opportunity for him to break free of the imprisonment of his own body, John is also prey to the corruptions and violence of the carnival world in which he resides. The central moral dilemma is one of profiting from another's misery and the exploitation that John endures from both ends of society. Bytes sells tickets to his "treasure"  and maintains John as he would an animal, whereas Treves' exploitation is far more subtle, but exploitation nevertheless. The upper classes may have a more genteel approach and take tea with the monster while the lower classes are secretly taken to his room after hours by a scheming hospital boiler attendant. "People pay money to see your monster Mr Treves",  is how he frames it when Treves stops the practice. John is reduced to an experience to be had by every social class..

Lynch admits friendship into the equation incrementally, as Treves comes to realise there is a gentle soul under the hideous exterior, he pressures the hospital to grant John permanent residence, which happens not on it's own merits of humanity but by the board toadying to a higher authority. Treves finds in John an intelligence waiting to be stimulated and a sweet man who focuses on the many kindnesses he's been given instead of the tortures he's endured. John's equanimity and grace shames the behaviour of most who come in contact with him. John's 'celebrity' brings some comforts, especially in the form of the famous actress Mrs Kendall (Anne Bancroft) who invites John to the theatre for the high point of his short life. John gets as close to a sublime experience as he is likely to come and decides to sleep that night like a human being.

Anthony Hopkins is wonderful as the conflicted and well intentioned Treves, and after this role his career took a decidedly upward trajectory. John Hurt is able to give a brilliant performance in make up that should have made that an impossibility, and his delicate voice and physical nuance gives the monster a humanity that is truly affecting, his yelling at the pursuing mob "I am not an animal, I am a human being"  is one of the iconic moments on all of cinema. John Gielgud is fine as the Hospital Governor and Wendy Hiller, who was a star since the 1930's is lovely as the Hospital Matron. The support honours however go to the lower class villains, Freddie Francis and Michael Elphick are both superb as the conniving  ne'er do well's, grimy and odious.

The Elephant Man  is one of the high points of modern cinema. Lynch fashioned a dense and elegant parable about the perception of what it is to be human. John was another 'outsider' for Lynch to identify with, a familiar and strong line of exploration in Lynch's work, and he frames the narrative in a way that leaves no room to doubt the problem is in the wider society and not with the 'freak'. It's a visually rich movie of poetic images and a master class in memorably staged pieces, and Lynch's sound design is again a strong and defining element in the way he uses it to create an environment that's suggestive and unnerving. Surprisingly, Mel Brooks, who produced the film, generously left his name off the credits so as not to infer any comedic element. and to give Lynch clear air. Lynch never forgot the gesture and credited Brooks with helping him become an A-list director. Lynch enjoyed a great success with the film and then frittered away the attendant Hollywood clout he'd earned completely with the disaster of his next enterprise Dune.  Subsequently  Lynch has accepted the mantle of Hollywood's reident wierdo, and his maverick outsider status means he's able to run his own race while his fans eagerly await the next unpredictable cinematic installment. 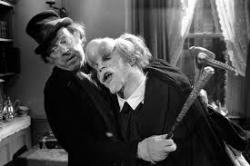 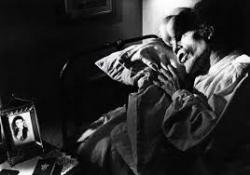