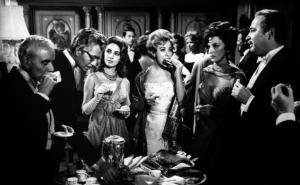 A beautiful question mark of a film, it examines the mores and conventions of what it is that sets humankind apart from the animal kingdom, and simultaneously shows that we are not removed from it at all. An elegant and witty idea as the premise, so concise it was pithily summed up in one line in the recent Woody Allen fantasy ‘Midnight In Paris’ when upon meeting Luis Bunuel in the 1920’s the Owen Wilson character Gil says to him, ’here’s an idea for a film, some rich people enter a room and can’t leave’ and ‘Luis’ replies ‘Why can’t they leave’?  One imagines that question was hurled at him many times after 1962. He said it occurred to him during his exile in Hollywood in the 1940’s, stemming from his hatred of large gatherings, parties for him were a ‘nightmare’ but it wasn’t until he had financing from a Mexican furniture dealer who’s wife, Silvia Pinal, was an actress that he could finally realise it. Bunuel had hoped to make the film in England , where they truly have a class system, or in France but couldn’t find funding for either.  At the time he was the toast of the Nouvelle Vague and it’s easy to see why as he’s just as subversive as Godard who must have enjoyed Bunuel’s deconstructionism of cinematic convention in this film.

The action begins on Providence Street, after the obligatory opening shot of a church with religious music playing over it. Bunuel was educated by the Jesuits and his progress to atheism left him with a need to unload on Catholicism at every opportunity. A large mansion has many servants preparing for a feast to be had by their masters and guests when they return from the theatre. Inexplicably the servants start to leave on any flimsy pretext they can, ‘I can’t wait to get out’ a maid exclaims. Soon the upper class guests arrive, and then seconds later arrive again, the repetition a device to challenge the audience. The hosts Lucia and Edmundo Nobile are the epitome of manners and taste, but when the carefully prepared entree is spilled all over the dining room floor Mme Nobile goes to the kitchen only to find the cooks leaving as well. At one point she encounters some sheep and a bear walking through the mansion but they proceed without comment as if it’s perfectly natural. Now all the staff have left except the butler, but as Bunuel said ’butler’s all want to be bourgeios’, and the guests start to relaise the lateness of the hour asking of others ‘why don’t they leave’?. It becomes apparent that none of them can leave the room, and as the hours turn into days we have a kind of ‘Lord Of The Flies’ for adults.

The character of the guests start to become apparent in the types that populate the room, The Colonel, The engaged young couple, the man-eating Valkyrie, The Doctor, The conductor, et al. Bunuel presents events as both normal and strange, the butler enters the room and when he tries to leave he can’t either, he’s then ordered to leave by Nobiles "Do as you’re told’, but it has no effect. As fatigue sets in tempers become frayed and slights are dealt out as deftly as they might play a hand of bridge. Old wounds are uncovered and the facade of civilisation is stripped away to uncover a more base side of human nature, one where the survival of the fittest is paramount. Bunuel deliberately references the lower classes by their absence, rarely having them mentioned in the dialogue, one of the women opining ‘The lower classes are less sensitive to pain’. When the water runs out panic sets in and the struggle to maintain the good form that is bred into their class is an uneven one at best, with some maintaining calm and reason and others resorting to settling petty scores by secretly throwing life-saving heart tablets out of the room.

Outside the army arrives, and crowds gather as news spreads of this event, but the army is unable to enter the compound in the same way the guests can’t leave. Bunuel hints at the impotence of institutions to profoundly affect the human experience, the things that matter are to be understood at a trancendent level, the terrain of poets not mapped by army cartographers of bereauocratic Bishops. Vanities disappear as the ‘trapped’ group become ‘pigs in a pigsty’. An older man dies and his body is stored in a wall closet, and soon the stench of death, metaphorical until now, literally fills the room. The engaged couple use one of the other closets to escape by suicide, their serene expressions contrasting those who remain, condemning them for dying in ‘mortal sin’. A masonic cry for help is unanswered, and a futile plea to the aristocracy is heard as it’s thought only a miracle can save them. The owners announce that if they survive they will ‘offer a solemn mass’ to divine provididence, one woman vows to go to Lourdes to purchase a ‘washable plastic Virgin’. Superstition of a voodoo type is briefly introduced as a desperate way to find an answer, but the uber-superstition of the Catholic type that hangs heavy at all times is never questioned by a pliant and conditioned flock, and the use of the sheep instead of say chickens, as the animals of slaughter, can only be a Christ reference to ‘blood of the lamb’. In fact only a child’s innocense looks set to unravel the dilemma when a boy who enters the compound is coaxed back by frightened and superstitious adults. An act of collective faith, in effect belief in a lie, gets the group free and Bunuel duly has them lined up in a magnificent cathedral for a mass of thanksgiving. Bunuel has the last laugh as the priests find themselves unable to leave. As the army is shooting the peasants out in the street, the sheep storm the church courtyard to the sound of cathedral bells.

Some of the more feted surreal touches in the film have their antecedents in more prosaic roots. The sheep being herded into the room by a bear was merely a device to get them food to continue, not a comment of Russia. The playing of a cello in a dream by a metal file, at once creating beauty and destroying it, is followed by the cello being smashed for firewood to roast the sheep, but this was a dig at famous Cellist Pablo Casals with whom Bunuel was carrying on one of several feuds. The cinematography and lighting are first rate, and the performances are fine, aided by the ‘bad acting’ in fact that Bunuel thought he had from some of the Mexican actors, in that it brings an artificiality to the proceedings that is entirely appropriate. The Bunuel humour is also woven through it, the setting sometimes looking like a play seen by the audience through a procenium arch framing, or the players pieces in a cosmic game of chess, this is after all, entertainment.

That pithy one line summation of Woody’s does not do justice to the dimensions Bunuel uncovers in the execution of the idea, as The Exterminating Angel is a brutal satire that contains existential resonances that reverberate endlessly, and as Bunuel himself replied to the posed question of ‘why can’t they leave’?, ‘no-one knows’ he said.

ps. a common slander to be postumously alledged of an atheist by threatened deists is that the atheist experieneced a ‘death bed conversion’. Wikipedia lists this in it’s Bunuel page and I’d love to know the source. 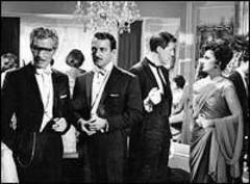 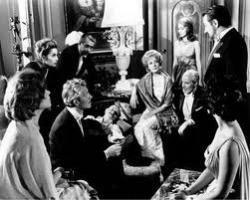 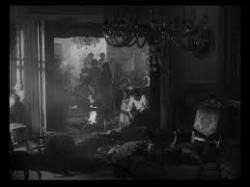 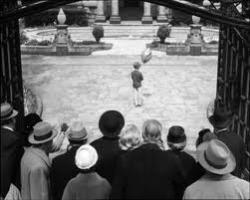