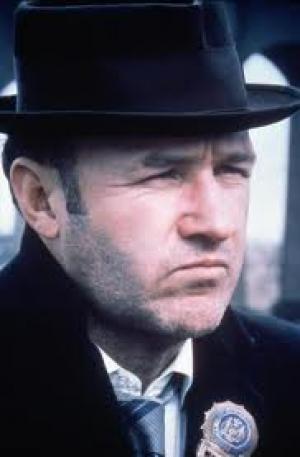 William Friedkin, a director who'd risen through documentary and television work to make a few undistinguished but capable pieces burst onto the scene with this award winning smash, and joined the Hollywood Renaissance crowd in reinvigorating American cinema in the early '70's. Friedkin was inspired by the docu-realism creeping into American and world cinema, specifically Costa-Gavras' political thriller Z  from 1969. Working from a script by Ernest Tidyman, Friedkin shot on location in Brooklyn and Manhattan, avoided any studio sets and used available light and non-actor's, methodology more attune to an Italian neo-realist film than a fast paced crime story.

As the events were based on a real case, and with the actual cops involved working as advisors on the film, the end result is a gritty and muscular realisation of a compelling drug bust. Gene Hackman was cast in the lead, Paul Newman was out of their price range, and Roy Scheider as his partner, neither were yet big stars but were not exactly unknown either. Hilariously, Friedkin asked his casting agent for the regular Luis Bunuel actor who was in Belle De Jour  to play the French villain, not knowing his name (Michel Piccoli), and after a series of mix up's the wrong actor came to New York to audition. It transpired that Fernando Rey was the better fit after all, and he was cast in the part of the suave French villain. C'est la vie.

Friedkin starts with some atmospheric shots of Marseille, and builds the tension nicely leading up to the first bloody indication of the reach and intent of the criminals involved.  Alain Charnier (Fernando Rey) is the smooth criminal at the heart of the operation, we see him in the guise of a respectable French businessman. plotting expansion of his port activities and romancing his beautiful and much younger wife in his luxury villa. The contrast to our heroes, who we meet next on a stakeout in Brooklyn, could not be more stark. Popeye Doyle (Gene Hackman) and Buddy Russo (Roy Scheider) are up to their Santa Claus fake beards in low life drug pushing scum, and revel in the challenge of bringing them to justice. It's plain Doyle has nothing in his life except his work, which drives his every waking moment, as he drags Buddy along for an after work drink, only to have his antennae act up and they spend their time off on another stakeout. Doyle gets deeper into the situation he's uncovered and convinces his superiors to give him qualified support. the two worlds collide when Charnier's connection arrives in New York to make the delivery.

The life and detail of the Brooklyn drug underworld is fantastically realised by Freidkin, it's the heartbeat and strength of a film which reeks of authenticity. The streets come alive with sometimes grim realism, adding to the picture of a society under pressure, on the edge. The world these detectives inhabit is not for the squeamish, it's dirty and unattractive and holds an uncomfortable mirror up to the wider society that allows it to exist. The sanitised versions of life on the street that passed for TV cops so popular at the time, Columbo, Mannix et al, is nowhere to be found in Friedkin's detailed and compelling canvas, and it influenced cop films for years to come. Friedkin maintains the suspense, keeps the action in context rather than falling for a gratuitous beating, or unnecessary car chase, when the chase happens it's essential to the action, and it's a knockout. The French Connection  has the feel of a Jean-Pierre Melville policier,  a police procedural that contrasts the dour and dogged cops with the elegant, gourmand they are trying to nail. Doyle sucks on a cola and pizza while Charnier sups at a fine dining establishment. Doyle uses his disgust as motivation, allowing him to step over any collateral damage in his obsessive pursuit of Frog Number One. Welcome to the dark side.

Hackman represented a 'new' cop in the way he presented a darker undercurrent in his brilliant portrayal of Doyle and he became a genuine star on the back of this role, for which he won Best Actor at the Academy Awards. Scheider was fine as Buddy and continued his rise through supporting roles until his career exploded with the mega hit Jaws   four years later. Rey was excellent as the refined and elusive Charnier, reprising the role in John Frankenheimer's respectable sequel, French Connection II  in 1975, which thankfully included Hackman as well. Tony Lo Bianco, from the twisted Honeymoon Killers  the year before was nicely cast as the oily upstart Sal Boca.

Friedkin cleaned up in the Awards season, Best Director and Best Picture and the huge hit this film represented hyper charged his career, one assumes that Howard Hawks liked his films after this, as at the time he proposed directing it he was living with Hawks' daughter. Hawks supposedly advised his potential son-in-law to make an action film rather than the art house flops he'd been making, and to include a car chase, and "make it the best car chase ever".  Friedkin was offered The Exorcist  next, which helped change the rules about how Hollywood released and promoted it's product, and the knock on effect of that was to eventually and unfortunately help the 'dumbing down' of mainstream American cinema and what it could achieve. But that's another story, for now Friedkin was king of the world, a view he enjoyed until he tried to re-make the classic French thriller, Wages of Fear,  and that's a French connection Freidkin probably doesn't view with as much pleasure.