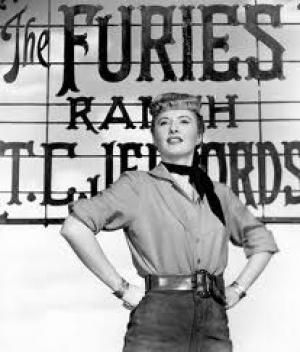 “...She nourishes the poison in her veins and is consumed by a secret fire.”
― Virgil, The Aeneid

Anthony Mann's theatrical background enabled him to meld the thematic hyper realism of the intensity found in Shakespeare and to transfer it to both his film noir features and oddly enough to his westerns. The Furies  could almost be a companion piece to his penultimate western, Man of the West,  made nearly a decade later, both with aspects of Oedipal love and hate and with resonance's with the Bard's King Lear. The Furies  goes further and adds a dimension of gender confusion, making the 'son and heir' character a woman, and even hinting at an incestuous relationship just for added spice. Mon Dieu! all this in 1952? Like Man of the West,  it's more Grand Opera than horse opera and it's delivered in crisp, poetic black and white (mainly because producer Hal Wallis was too tight to stump up for technicolour) by cinematographer Victor Milner, a Cecil B. DeMille stalwart, which adds a certain gothic flavour that notably complements the dark toned story.

New Mexico is the settings in the late 1800's, when cattle barons ran the territory like feudal lords, and in the case of T.C. Jeffords (Walter Huston), who owns The Furies, he even prints his own money, T.C's, which he spreads around as pay and to cover his debts from living large. Vance Jeffords (Barbara Stanwyck) is T.C's headstrong daughter, and with her brother weak and ineffectual she is the obvious person to take over the sprawling ranch when T.C dies. Her brother Clay arrives home, he enters the hallway and is dwarfed by the portrait of his father, a visual clue from Mann as to T.C's dominating character, and he proceeds to find his sister in their dead mother's room wearing one of her gowns. Vance asks Clay, "why do you let him beat you"?,  as she toys with a pair of her mothers scissors, "He despises anything he can beat",  she elaborates. T.C arrives from his travels and notices the gown on Vance, "It becomes you".  She cuddles up to T.C in a very non daughterly way and he showers her with gifts as Clay looks on. Mann has given us the entire premise and core of the film, concisely and beautifully constructed in 5 minutes flat.

The only note of contention between father and daughter is over who she'll marry, T.C insists it has to be a better man than him, but essentially his ego is such he thinks there are no better men. Clay's wedding brings a visit from Rip Darrow (Wendell Corey),the son of a man T.C killed in a "fair fight" over land, and Vance asks him to stay after T.C tried to evict him. Vance is attracted to him, but T.C wants to expose him for a "dollar grabbing blackleg",  and when he asks Rip to choose between his daughter and $50k, he picks the money. T.C gets involved with an aged gold digger in Flo Burnett (Judith Anderson) and it's Vance's turn to be disgusted. Vance hurls her mother's scissors at Flo in a fit of rage, scarring her badly, and is estranged from T.C as a result, upon whom she vows revenge by taking The Furies off him in a secret money deal with banker Rip.

Mann's progression into the psychological western is on show here, the narrative plays out in the complex ways the characters interpret emotions and actions towards each other. The core of the film is the barely concealed jealousy of father and daughter in relation to each other's sexual partners, there's an undertone of frustration in that they can never be that to each other. Vance directs her rage towards the possession of the despicable Rip, even though being with a man is "like having a bit in my mouth",  and he returns serve by realising "you're married to The Furies".  In one sense by having The Furies she has her father in a way that compensates for the inability to have him sexually. Mann also offers a misdirection in the sub plot of forbidden love, as he focuses our attention on the relationship between Vance and her childhood Mexican friend Juan (Gilbert Roland), who is in love with Vance. They meet regularly in secret and he's the only man Vance can talk to, but she denies herself love towards him. Mann plays this overtly, giving Vance a glimpse of what true love represents, all the time laying the subtext of a deeper forbidden love.

Mann's theatre experience meant his work with actors was always top shelf. Walter Huston, in his last screen role, gives a magnificent performance as T.C, ornery and lively, a portrayal that never hints at artifice or satire, and he has great fun too, his rendition of a cowboy song with Flo playing piano is fantastic. When he says at the end, "There'll never be another like me",  it rings true at many levels. Barbara Stanwyck matches Huston in every respect. She has the intensity to play quiet and loud and to make each choice hit the mark, and her 'common girl' beauty and intelligence shines through, she commands the screen and manages to look radiant and appealing in a gown or in a pair of jeans. Note should be made of Judith Anderson's wonderful portrayal of Flo, it's strong and convincing, and she makes the most of an essentially small but crucial part.

Mann shot the piece in almost expressionistic tones, more common in noir than on the prairies, but that choice elevates The Furies,  to an almost mythic level of intensity, the name itself an allusion to Greek mythology and the female deities of vengeance. The complex web of trust and deception plays out against a fatalistic tone of doomed choices in muted hues. Raoul Walsh did much the same in his excellent, dark 1947 film Pursued,  with Robert Mitchum. Niven Busch's source novel has some of the melodrama of his Duel In The Sun,  which was made by David O. Selznick into a film in 1976, also having a forbidden love component. Mr Freud would have had a good time studying Mr Busch. That the uncertainties of post war America, those that spilled over into the work of the gritty film noir's, also seeped into the most American of art forms should not be so surprising I guess?

The high passions of The Furies  takes the western into a different area than the less fetid ruminations of Ford and Hawks, and Anthony Mann carves out an area of exploration that in many ways he made his own, continuing the 'psychological' western cycle of the 1950's in a string of celebrated collaborations with actor James Stewart. The Furies,  a western variation in a minor key and Puccini on the plains. Great stuff. 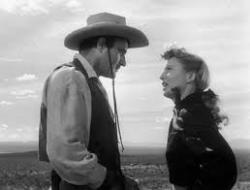 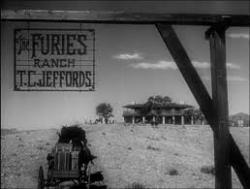 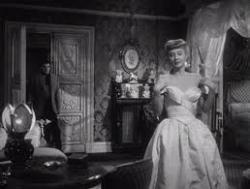