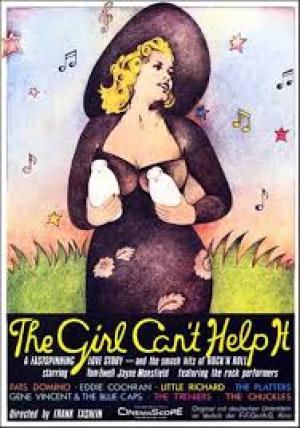 The Girl Can't Help It

"Rock and roll music, if you like it, if you feel it, you can't help but move to it. That's what happens to me. I can't help it."
~ Elvis Presley

Frank Tashlin started showbiz life in Hollywood as an animator before and during WWII, and after stints at several studios he fell into live action work, first as a ‘gag’ man, then screenwriter, for Bob Hope, Lucille Ball, Jerry Lewis and Dean Martin. He started as a film director unexpectedly, being asked to finish off a section of The Lemon Drop Kid  for Bob Hope, where he made the sequence for the charming Livingston/Evans song, Silver Bells,  a classic of its kind. He then spent his time working for RKO and Paramount in the early ‘50s before making a picture for Fox based on the current rock and roll fad (before its expected fade out) called The Girl Can’t Help It,  and with it he made a touchstone for the era.

‘Fats’ Murdoch (Edmond O’Brien) is a slot machine king, a mobster who wants to make Jerri (Jayne Mansfield), his girlfriend, a singing star. He hires a down at heel press agent called Tom Miller (Tom Ewell) to make it happen, and puts his bodyguard Mousie (Henry Jones) on the case to ensure Tom keeps his hands off the merchandise. Tom and Jerri (get it) hit it off, and Tom discovers that Jerri does not want to be a star; she wants to be a housewife. Tom also finds that since Jerri has an appalling singing voice, granting her wish to avoid stardom should be a straightforward proposition.

Tashlin eschews movie convention at every turn and the plot itself is superfluous, a thin re-write of Born Yesterday  and merely a generic conceit from which to showcase the talents of the cast. He opens with a cute ‘this is a movie’ sequence where Tom Ewell opens out the screen for cinemascope, and calls out for “gorgeous life-like colour by Deluxe”, a reminder that movie producers where trying to lure punters away from the easy home-based anaesthetic of television in the 1950’s. This droll, post modernist element, is a hint of how Tashlin loved to break convention and subvert expectations at a rate of knots, as he essayed what was essentially a middle-aged white man’s fantasy, that had little or nothing to do with rock and roll. It does of course have plenty to do with sex, which Tashlin makes very plain with the startling, if outrageously comic, image of Jerri offering her 'milk' to Tom, Freud would have a field day. The cinema of John Waters starts here.

Jayne Mansfield was in many ways a cartoon approximation of the ideal 1950’s dream woman, all exaggerated curves and girlish giggle, and she makes plenty of the faux-Marilyn Monroe persona she was lumbered with. Tashlin’s background as an animator exploited this dimension in a hilarious sequence where Jerri is visiting Tom in his bachelor pad. She passes an ‘ice’ truck and, as the iceman drools at her impressive figure, the ice melts - The milkman exiting Tom’s building is carrying a bottle which proceeds to boil over as Jerri passes, with an unmistakably phallic overtone – Jerri passes an older man with thick lenses in his glasses and they crack comically. His casting of Tom Ewell further stoked the masturbatory appeal of the glamour girl cipher, as he’d had a recent hit playing the unlikely, 'ordinary Joe' love interest opposite the ultimate dream girl, Marilyn Monroe, in Wilder’s The Seven Year Itch. The subliminal message was an average guy could get a bombshell wife, the ultimate in consumerist '50s trophies.

Tashlin does not shy away from edgier or darker comedy either, despite the mega-watt colour of the visual palette he employed, as when Fats talks of another song he wrote in prison titled “There are no lights on the Xmas tree mother, they’re using the electric chair tonight,”  a sardonic note for any mid-fifties film to hit. Mousie explains that Fats gets sentimental when his visits a certain location because, “most of his best friends were killed there.”   The hint as to the level of satire, and possibly the esteem in which rock and roll was held by Hollywood comes at the beginning, as Ewell delivers a line about “Music that expresses the culture, the refinement, the polite grace of the present day”,  only to have Little Richard blast forth with the title song, written by Bobby Troup. Tashlin’s concession to legitimate ‘showbiz’ can be seen in the Julie London ‘ghost’ sequence, which has the lovely singer appear as a vision to Tom, singing her great torch song Cry Me a River.

The true significance of The Girl Can’t Help It  lies not in its indication of the artistry of Frank Tashlin, that can be found in many other films, particularly the ones he did with Jerry Lewis, but in the inestimable impact it had in the UK, and the massive influence it had on the next generation of rock and roll. By the time the impressionable schoolboy audience of 1956 came to be young men, rock and roll was effectively dead in the USA in the early ‘60s. Elvis was in the Army, or commandeered to star in a succession of cheesy but profitable Paramount films, Jerry Lee Lewis was in disgrace after marrying his 13 year old cousin, Little Richard had found God and become a preacher, Chuck Berry was in gaol and Buddy Holly was dead. Rock and Roll was saved by a cohort of pasty faced English boys, who were inspired by the film, swapped their acoustic, skiffle guitars for electric and practised like demons.

In March 1957 the film opened at the Scala Cinema on Lime Street in Liverpool, and was seen several times by the teenage future Beatles. Apart from being riveted to the ample charms of Miss Mansfield the boys were transfixed by the real rockers on screen, the first time they’d seen their idols playing live. George Harrison set his sights on the guitar Eddie Cochran was playing (a Gretsch 6120) John copied some of Gene Vincent’s stage moves, and Paul went and immediately ordered a copy of Twenty Flight Rock,  by Eddie Cochran, the song he played for Lennon when they met a couple of months later at a church fete. That meeting changed the course of popular music as the pair soon took their raucous version of rock and roll to Germany, where they learnt to play a hard edged iteration which eventually took them to stardom.

The Beatles took rock and roll back to America, as Bob Dylan noted on Bringing It All Back Home,  and the vibrancy and ebullience they brought with them was embraced by the entire world. The Girl Can’t Help It,  a middle aged white man’s masturbatory fantasy (no surprise given the men who ran the studio system and who had to green light the project) meets Born Yesterday  unwittingly played a pivotal part in nursing rock and roll through to its second phase. Frank Tashlin had, by presenting fully fledged, filmed routines of Little Richard, Fats Domino, Gene Vincent and Eddie Cochran, real rockers rather than ‘entertainers’, inadvertently captured the Zeitgeist and lit a fire across the Atlantic that came back to warm the hearts of the next generation of music fans and musicians. Tashlin may have been making a satire, but he also was capturing a sociological phenomenon, and the spirit of rock and roll, he just couldn't help it. 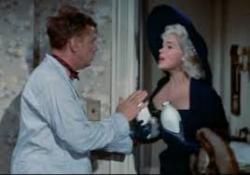 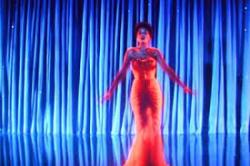 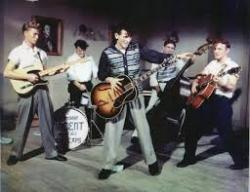