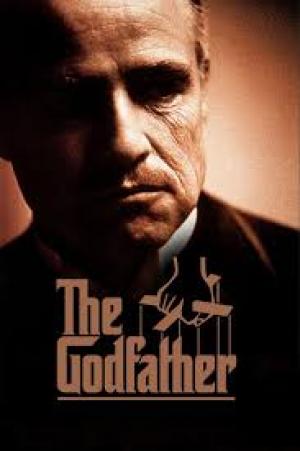 Francis Ford Coppola’s masterful gangster triumph is as much an example of chance alchemy as deliberative, declarative movie making. The story is well known, but that doesn’t make it any more believable.... Wunderkind, failed actor and accidental studio head Robert Evans found himself running Paramount just when all the old major studios were coming to grips with the counterculture changes and the attendant shake up in the movie business. Evans met with Mario Puzo, a writer who had a gambling debt he had to pay and needed $10,000 in a hurry, outlining a story on the Mafia that he intended to write as a new book, Evans took a punt and bought the screen rights in advance. Puzo wrote the book, which topped the bestseller list and suddenly Evans had a hot property on his hands and needed to translate his windfall into a suitable film. He says Hollywood Mafia films had all failed before because they were not made by Italians, but by Jews or WASP’s, so he thumbed through a Director’s Register and noted all the names that ended in a vowel! Of course, this was after he’d offered the job to 11 directors and been turned down by them all. It makes a good story and at its core it’s true, if embellished to show Evans in a good light, but all the key players had their own versions, The Godfather as Rashoman, who to believe?

Francis Ford Coppola was one of the generation of film brats, the first to study film at University level, before he made a couple of minor films, most notably The Rain People. Coppola was cheap, and he was Italian, and after he too initially turned it down as being too ‘pulpy’, he reconsidered due to his precarious financial situation and took the job. Coppola immediately saw the potential to make a grandly poetic, quasi-operatic rendition of one part of the immigrant story and from that moment he and Evans clashed on almost everything to do with the production. Evans, the great creator it should be remembered, wanted to cast Ryan O’Neal in the Pacino role! Apart from the miracle of the alchemy, with all the mix of egos and power struggles, it’s a wonder the film got made at all.

Like John Ford before him, Coppola emphasises the place of ritual in human interaction and endeavour, and the piece starts with a wedding, as Don Corleone (Marlon Brando) is marrying off his only daughter. Corleone sees a procession of people asking favours, establishing his quiet power and the tacit dangers of getting on his wrong side. He is supported in the family business by his hot-headed, rough and ready son, Sonny (James Caan), his thoughtful adopted son Tom (Robert Duvall), and his none-too-bright son, Fredo (John Cazale), all foot soldiers in the cause of the Corleone empire. Also at the wedding is younger son Michael (Al Pacino) who is an outsider in terms of the family business, a war hero who seemingly has a chance at becoming ‘legitimate’, a choice he avowedly prefers rather than sully his hands with his father’s business machinations. An attempt is made to usurp Don Corleone’s position and Michael is begrudgingly drawn into helping out. This creates a schism between him and his girlfriend, Kay (Dianne Keaton) who wants Michael to live a ‘respectable’ life.

Coppolo’s master stroke was to elevate the worth of actually ‘family’ in this gangster drama. Hollywood had mostly treated crime scenario’s as making the protagonists one-dimensional villains, cardboard evil to be taken down by the good guys in time-honoured Hollywood fashion. The era of Film Noir and the new hope of the Counterculture of the 1960’s brought a fresh honesty as to what was possible on film, and the much-vaunted Production or Hayes Code was a toothless tiger by the time Coppola composed his masterpiece. Coppola was able to humanize his villains, to make us care for them and their survival, despite the fact they are criminals and killers.

Coppola worked closely with brilliant cinematographer Gordon Wills and together they created a visual tableau that elevated the gravity of the subject matter. The opening scenes where Don Corleone is hearing personal requests is shot in dark, solid, serious tones, somewhat juxtaposed against the ostentatious splendour of the outdoors wedding, simultaneously going on outside the house. The framing and lighting tells us of the Don’s dark power in a subtle, quiet way and enhances the idea of unspoken authority based on a regime of fear. Coppola constructed so many memorable scenes and sequences, the assassination of McCluskey (Sterling Hayden), the death of Don Corleone, the killing of Don Fabrizi (Richard Conte) and Moe Greene, all masterpieces of mise en scene and formal visual elegance. The sombre tones and intensity of the delivery of aural and visual information elevates the film from a gangster program-filler to high art, as does the pitch perfect score from Italian composer Nino Rota, a Fellini favourite. Sergio Leone passed on directing the film as he had his own gangster epic in mind, which he filmed a couple of years later as Once Upon a Time in America.

Coppola created a masterpiece by putting all the pieces of the puzzle together his way, fighting for and casting the key roles with Marlon Brando and Al Pacino against studio wishes. When the pressure came on to Coppola to be fired and replaced with Elia Kazan, the key players such as Brando backed Coppola and the film was finished his way. Brando’s casting was inspired and controversial, but his screen test and disguising make-up proved so compelling it swayed any doubting moneymen, and his performance was so mesmerising it won him a Best Actor Oscar, his second. Brando boycotted the Awards Night (protesting native American issues) as did Pacino, but his was because he was nominated as a Supporting Actor, even though he had more screen time than Brando. The cast is simply one of the best ever employed in a Hollywood film, Stanley Kubrick rated it the best cast ever assembled. Diane Keaton and John Cazale both rate a special mention in key supporting roles as Kay and Fredo, but there is not a sour note sounded in a pitch perfect ensemble.

The Godfather won Best Picture at the Oscars, vindication for Coppola and his bold choices in difficult circumstances. He turned what could have been a nasty melodrama into compelling high drama, rightly seeing the piece as an examination of the immigrant struggle to grab a slice of the American Dream. The ‘rags to riches’ aspirations of the poor, and poorly educated of the early 20th century wave of migration spawned many stories of less than legitimate scrappers gouging a living any way they could, all the while looking to the day they could be legitimate, even respectable upstanding citizens. One thing America rewards is success, and often the grizzly details of how that success and money is acquired is a distant regard for a culture dedicated to making a dollar.

Given the near miraculous circumstances of the conception of The Godfather, and the messy, bloody delivery amidst a plethora of feuding midwives, the fact that the resultant child was so beautiful caused a stampede of claims to its fatherhood - Evans and Coppola would be feuding for decades. Evans even used the collecting of the Oscar to chat up Catherine Deneuve from the stage, Coppola parlayed the success into boosting his own studio, Zoetrope, which had varying measures of success before foundering on the rocks of 1980’s excesses. The film is possibly the crowning achievement of the American Renaissance, the impossibly rich period of American ‘new wave’ creativity by the ‘film brat’ generation, that arose as a response to the French and Italian surge in the early 1960’s. It is arguable the crowning achievement might instead be Coppola’s sequel, The Godfather II, which he made after a side tour into paranoia with the excellent The Conversation. Either way, The Godfather was a high-water mark in a golden era, a miraculously small window of time when major studios made serious films about serious subjects as commercial propositions, a situation that was not to survive the post Jaws ‘blockbuster’ phenomenon. 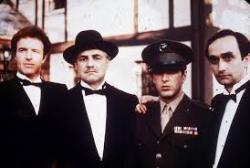 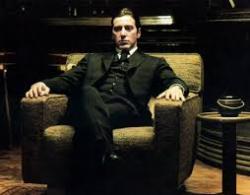