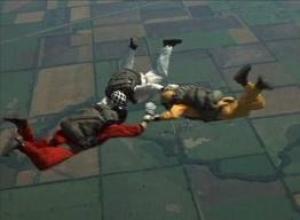 John Frankenheimer was of the generation of American filmmakers who came through the ranks of television during its golden era in the 1950’s, like Robert Altman and Sidney Lumet, and provided a series of seminal films in the first decade of his career. Frankenheimer teamed with Burt Lancaster on several occasions, notably with The Birdman of Alcatraz, which won Lancaster an Oscar, and the taut and stylish WWII French resistance film, The Train. The duo paired up again for the downbeat existentialism of The Gypsy Moths, Lancaster bringing his old From Here to Eternity surf companion Deborah Kerr along for the ride, in a movie that defied expectation and remains a superb example of bold and committed cinema against the odds.

A barn storming sky diving team visits a small town in Kansas to put on a show. The team is led by Mike (Burt Lancaster), known for his last minute chute releases, and his MC and partner Joe (Gene Hackman). Their younger jumper Malcolm (Scott Wilson) has an aunt and uncle in the town who agree to put the team up, and Mike is immediately attracted to Elizabeth (Deborah Kerr), who returns the interest. Soon Elizabeth must choose between the dull certainties of her small town life and the possibility of life on the road with Mike.

The central existentialist idea of The Gypsy Moths is to strive to fill a life with meaning, and the crisis that Mike precipitates in Elizabeth forces her to question her empty but comfortable existence. “Jumping is not only a way to live, it’s a way to die”, Mike exclaims, as he blatantly seduces Elizabeth in front of her ineffectual husband John (William Windom). John listens to Mike and Elizabeth making love, and in that instant he’s also forced to confront his own worth, and the life he’s built. Elizabeth is asked about her dilemma, “He wanted me to go with him, and the thought terrified me”, she says succinctly.

Burt Lancaster, not content with mere movie stardom, consistently picked challenging roles for himself, playing against type at many opportunities, but for this era go no further than the role of Ned in the remarkable The Swimmer. As with Ned, Mike is a subtle, non-showy role, his fading masculinity is the cause for his own existential crisis and Lancaster, the ex-circus acrobat was again perfect suited to the task. Bravely, for the time, Frankenheimer even dares to suggest middle aged people have sex lives, and Kerr steps up to the mark with a bold nude scene, underlining the humanity at the core of the piece, as she tries to push back the advancing years and reclaim some of the hope she’s long since given up. Gene Hackman shored up his recent success in Bonnie andClyde by making a fine fist of Joe, a man living in Mike’s shadow, but aware of his limitations. When Malcolm belittles Joe’s bravery in Mike’s presence he’s scolded with a terse “Did you ever see him sweat kid”?

Frankenheimer’s dark tones allow for the prurience of the skydiving audience to filter through, as Mike seems very aware of the tacit death wish impulse which draws the crowds, and perversely feeds his own motivation. Mike knows he can tease the audience by delaying his chute opening, and if he dies in the process, then ‘That’s entertainment’. The suburban ennui into which Elizabeth and her clique have descended is rendered in muted tones and claustrophobic shapes by Frankenheimer, who contrasts it with the freedom of the skies when Mike and co go aloft.

Frankenheimer had made the startling The Manchurian Candidate, and the equally stunning Seconds, a few years prior to this film, and both efforts reveal a director happy to avoid more populist fare in favour of the challenging and interesting. The turbulent era suited the director, as the wrench of the Kennedy assassination and the end of ‘Camelot’ had opened up enormous fissures in the American psyche, and interestingly in 1968 it was noted liberal Frankenheimer who drove his friend Senator Robert Kennedy to his fateful assignation at the Ambassador Hotel. The reinvigoration of American cinema during the late ‘60’s afforded Frankenheimer’s cynical vision to chime neatly with the dominant counter culture’s anti-establishment ethos, but ironically The Gypsy Moths was rejected by the cinema going public, not ready for its downbeat criticisms of the American dream. It remains another under rated gem from a fertile and golden era when mainstream studios made intelligent films for grown ups. 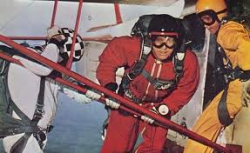 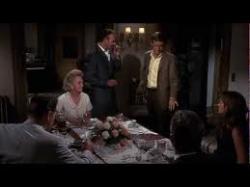 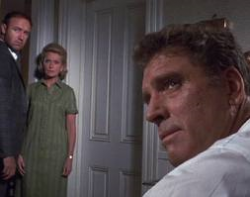