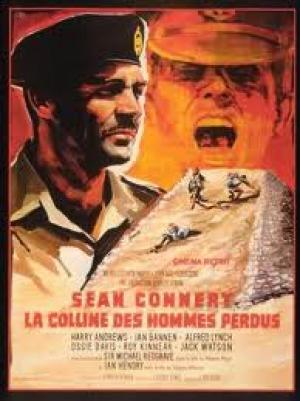 Connery bonds with others

Sean Connery had the good sense to avoid type casting as James Bond in the early '60s by choosing challenging roles that defied public expectations and pushed his acting abilities. He worked with American director Sidney Lumet on this, oh so British production, with a slew of first-rate character actors to play against. He enjoyed working with Lumet so much he made another 4 films with him, and after he was lured back to the Bond role in the early '70s he insisted that MGM finance a couple of 'vanity' projects of his own choosing, with his director of choice, as part of the deal. That deal led to the remarkable 'The Offence' with the great Scottish actor Ian Bannen again in the cast, as he is here. Ossie Morris, a John Huston regular shot the film in gritty black and white on location in a Spanish desert. The script was by Ray Rigby who had co-written the play of the same name based on his own experience of an incarceration facility during WWII.

Regimental Sergeant Major Wilson (Harry Andrews) runs a tight ship, he is the effective despot of a military detention camp in North Africa during the war as the Camp Commander is more interested in spending time with the local hookers. Joe Roberts (Sean Connery) is a 'busted' Sergeant Major demoted to the rank of trooper because of insubordination. Roberts punched a senior officer after refusing to order his men into a 'suicide' mission and has been sentenced to time in the camp, where his status as an ex officer attracts interest from the new hard-edged NCO, Staff Sergeant Williams (Ian Hendry). Roberts shares a cell with a motley assortment of new arrivals and when one of them suffers a shock outcome under the pressure of the hill and from Williams' tactics there is a price to be extracted in the ensuing power struggle.

Lumet finds many ways to excite visually the staging of what is essentially a filmed play, beginning with a remarkable moving crane shot. The sequence lasts two and a half minutes and shows the central edifice of the camp, the dreaded 'hill', before backing out to reveal a fresh intake of recalcitrant soldiers. The camp compound is always full of exercising men, drilling and working hard in the desert heat. Lumet uses many angles and set up's with his camera to get close and extract every drop of tension and emotion he can from his battling protagonists. The dynamics and flow of the involved narrative is never lost and his ability to handle ensemble pieces, as with his groundbreaking 12 Angry Men is never in doubt.

The hierarchical structure of the military is shown to be it's inherent weakness in dealing with major issues, and particularly as it entrenches the reflexive action and impulse to institutionalised cover up of any unpleasant or damaging incidents. The issue of who runs the camp flares up when the Medical Officer (Michael Redgrave), faces a threat of blackmail when he calls the extreme punishing tactics of the NCO into question. Roberts, as an ex-officer, knows the regulations and fixes upon having the guilty brought to justice, but must content with the violent passions of his cellmates. Jacko (Ossie Davis), as the only black man in the group, faces racism from Wilson and the others, "niggers couldn't run a knocking shop" is how Wilson indelicately frames it. Jacko eventually lampoons their attitudes in a stark and attention getting way.

The summer nights see the officers get smashed on booze, retreating from the heat and the pressure into a numbed and legless condition. Homosexual overtones are never far from the surface with NCO Harris making suggestions to one of the sensitive new inductees about how things could be, "made easier" for him, "we had a queer in here, she knew how to survive" he explains. Routine parades are delayed by interminable waiting for the Commandant to return from his horizontal refreshments, "we're all doing time" says Roberts, "even the screws". Roberts is beaten by Wilson, his disgust at him palpable for the perceived betrayal of his rank in an unthinkable manner, "I won't be a good clockwork toy soldier" spits back Roberts, denying Wilson's core mantra and ethos.

One of the great joys of the film is the depth and talent of the cast. Andrews devours the role of Wilson, his big-toothed mouth and preening smile used to devastating effect in rendering a character so sure in the 'righteousness' of his methodology. He's matched by an intense and thin-lipped turn from Ian Hendry and an intelligently nuanced characterisation from Bannen as the respective NCO's. The brilliant and welcome presence of the irreplaceable Roy Kinnear is a mordant delight, who never puts a foot wrong, and Ossie Davis is very fine as the dignified Jacko. Michael Redgrave adds the requisite gravitas with what is little more than a well-judged cameo as the humane but ineffectual Medical Officer. Sean Connery is well able to hold his own in such stellar company and his Roberts is one of the finest roles of his distinguished career, and ironically one where he rebelled against a 'licence to kill', and no doubt doomed to be overshadowed by the legacy of you know who.

Lumet fashioned a serious and brave piece of cinema in The Hill, one that comes from a British tradition of fine war films, unafraid to turn the light of analysis inwards and expose the dark underbelly of the war machine that conquered the world. Sidney Lumet would enjoy an insanely long and fruitful career, directing his last film in 2007, but The Hill stands as one of his finest. 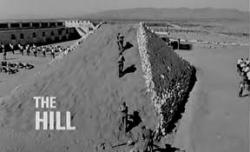 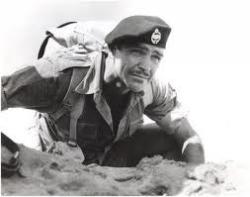