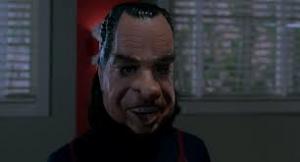 Ang Lee brought an outsider’s clarity and a fine artist’s perspective to the murky and fractious era of Watergate America, when all the old certainties were seemingly unravelling at a rate of knots as the country went through a national identity crisis of epic proportions. The counterculture era and its concomitant ‘flower power’ promise had petered out in the wake of Richard Nixon’s rise to power and the resultant escalation of the Vietnam War. The hippies were put in their place at Kent State and the country handed a sound defeat by the Chinese backed Vietcong with the fall of Saigon, an event that ended an unpopular war but caused a national trauma of identity and confidence. The Ice Storm  is an examination of the middle class mores that took a beating at the time, a case study of families dealing with undercurrents and tensions that belie the suburban idyll and comfortable lifestyle they believe is their birthright.

Ben (Kevin Kline) and Elena (Joan Allen) are happily married and living in the blissful surrounds of New Canaan, Connecticut, playing out their roles as pillars of society and keepers of the liberal progressive flame. Their teenage children are cynical and emotionally distant, a tacit commentary on the space between the generations, as they overtly reject their parents legacy of Vietnam and Nixon. The couple struggle with Ben’s past infidelity as they also confront the almost bleakly comic cliché of the ‘key party’, a perverse middle class sop to the sexual revolution where married couples randomly swap partners via the lottery of the key ring. Janey (Sigourney Weaver) is the ice cool suburban dream who inhabits Ben’s fantasy, as he pursues an affair with her underneath the gaze of his wife and his peers.

Space is a motif that Lee subtlety explores, the leafy and verdant surrounds of the gorgeous prison that is middle class Connecticut on one hand and the emotional space that exists between the protagonists on the other. Lee examines the tension in the generation gap, as the children of privilege struggle to come to terms with the contradictions and hypocrisy they encounter on a daily basis. Emotional space is something each of them seeks; a place to decompress from the rigidity of the expectations that being such as intrinsic part of the middle class comes with. It is no accident that they live in New Canaan, a ‘promised land’ of sorts for the American Dream, a place that proves equally problematic in terms of hope and aspiration.

Kline delivers a career best performance in a dramatic role, ideal as the weary and well intentioned Ben, who dutifully plays his expected role as alpha male of the tribe, albeit with a weakness that is all too common. Unable to connect with his wife he seeks solace in the mirage that is Janey, a chimera who seeks to dull her own anodyne and stilted existence with a succession of cheap thrills, of which Ben eventually realises he is merely one. Elena is overwhelmed by a gnawing, tacit emptiness and grasps at a series of connections, one with a local priest and also by challenging the conventional consumerism with an episode of mild criminal rebellion.  Lee obliquly hints at the betrayal of trust that Watergate engenders at many levels, and also at the emptiness and vacuum at the heart of western culture, particularly with the use of Elton John and Bernie taupin's song Levon, and its crucial line "The New York Times said God is dead."

Ben and Elena are the image of the successful and content middle class couple, happily married and doting parents on their teen kids. The image proves to be just that as both battle the quicksand of their relationships with their disaffected children, the expectations of their peers, their society and their place in it. The teens view the older generation as hypocrites, numbed into tacit acceptance of the more extreme right-wing tenets of the Nixon administration; indeed a key scene has Kline berating his daughter for her behaviour while she’s wearing a Nixon mask! The ‘liberation’ of the sexual revolution is reduced to juvenile snickering from the adults over the popularity of Deep Throat,  while the younger teens struggle with their hormones as they fumble with each other, approximating the uneasy and casual disregard for real human connection that they see around them.

Ang Lee brings a devastating clarity to the narrative, the sombre hues and the weight of regret frames the era in a distinctly wintry tone, one worthy of Ingmar Bergman at his best. Lee makes an existentialist tome, where several of the key protagonists are in quiet crisis and the societal compacts that usually keep them in check are straining at the seams. The consumerist dream of the ‘50s and the cultural upheavals of the ‘60’s seem to have given way to a feeling of being lost in a directionless funk, where once America had the road map and plan to lead the ‘free world’ now it seems impotent and less relevant. The characters seem like ghosts in their own lives and long for real connection and warmth in a cold and emotionless landscape, not only of their surrounding environment, but of the heart and mind. Lee doesn’t overplay the inevitable conclusion, but deftly underscores the central message; an icy terrain of any stripe has a deadly beauty.

The ensemble cast is universally in fine form, the young performers matching the intensity and authority of their older cast mates at every level. As nuanced and effective as Kline is, a masterful actor in almost any field, the adult acting honours go to Joan Allen who delivers a heartbreaking characterisation of the much-put-upon Elena. She is mesmerising and creates a figure that is painful to watch and yet compelling, you want to turn away but you can’t. Sigourney Weaver brings a fine dimensionality to her lesser part and makes the character work at every level the script requires, she manages to make her Janey authentic and indelible. Of the teens they are all superb, with Tobey Maguire and Christina Ricci standouts, and Katie Holmes wonderful as the bloodless yuppie to be. No surprise they all went on to significant acting careers.

The Ice Storm  is one of the key films of its era, a masterpiece at every level and a challenging and layered dissection of a turbulent time. Ang Lee is a master when he is operating with material this insightful and resonant; one hopes he understands this before he accepts another cartoon like The Life of Pi.  The Ice Storm  will be a significant part of his formidable cinematic legacy. 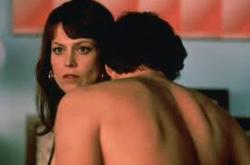