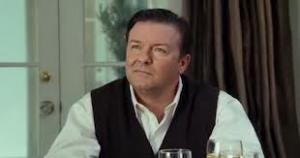 The Invention of Lying

* The film is co-written and directed by Matthew Robinson

Ricky Gervias rose to prominence on the back of the sharp and incisive British TV series, The Office  and  Extra's  in the early and mid-naughties, pushing the boundaries of what television could achieve with his acerbic, edgy and observational comedy.  Soon his ambition to paint on a broader canvas saw him direct his talent to feature films and The Invention of Lying  is his high concept, comedic confection directed towards no less an issue than the existence of God. Gervais’ musings co-incided roughly with the rise of the so called ‘new atheists’, as exemplified by Richard Dawkins, Christopher Hitchens and Sam Harris et al. and indeed Gervais has ‘outed’ himself as coming down clearly on their side of the argument. The rampant success of the US version of The Office  enabled Gervais to call upon the cream of US comic actors to fill the ensemble cast and they helped spark the thoughtful comedy to moments of true wit and insight.

Gervais takes as his start point the notion that everyone can only state something that is true; therefore, nobody has any reason to doubt what anyone else says. In this bizarro world every utterance is accepted at face value, as people are prone to Liar Liar  type frankness, or brutality, in their dealings with others - “I’m out of your league and I won’t be having sex with you tonight”, is the greeting short, pudgy Mark (Ricky Gervais) gets when he arrives for a date with the beautiful Anna (Jennifer Garner). Where the film achieves insight and real depth, not found in Jim Carrey’s gurning-fest, is in the fact that there is no such thing as fiction in this world. History is therefore a dry re-iteration of what has  happened; this is a humanity bereft of storytellers where ironically Mark works as a screenwriter specialising in the 13th century but has difficulty in selling the Black Plague as a topic of interest.  Mark is sacked, humiliated, and unable to pay his rent about to be evicted, when the resultant stress causes something in his brain to change and he suddenly finds he can tell something that isn't true, he becomes the first human who can tell lies.

Gervais' subtle examination of the motivation to lie is at the heart of the matter here, tacitly asking the moral question, "is it okay to lie"?  The answer offered here would logically be, based on the evidence, that it's absolutely essential to lie, as lying is shown to benefit as well as damage, therefore it's not 'lying', that is the problem, lying is only a tool, it's the application. Mark, initially, uses his newfound ability to benefit himself, but soon sees a wider application, and spreads happiness amongst those he encounters and even prevents his depressive neighbour from attempting suicide. Mark accidentally creates a stir, when he is overheard by nursing home staff telling his dying mother about a place she will go to after she dies, a paradise, unheard of by the doctor and nurses. Mark couldn't bear the fact his mother was terrified of the 'void' on offer, and his empathy and yearning to ease her fear leads him to his most elaborate lie, and in effect he becomes humanities first storyteller.

Gervais cleverly satirises the beginnings of the God myth, and in his own way tacitly applies Occam's Razor to the question. What is the simplest explanation here, that an invisible man in the sky created and controls everything in the universe, punishing and rewarding us for our behaviour after we die, or somebody made the story up? In the time of mankind's infancy, where explanations were inexact at best, it's understandable the poetic/romantic myth of an interventionist creator could take hold, but as science increases our understanding of those concepts it has forced believers to retreat into the realm of metaphor to hold on to those beliefs. God, who made man in his image, i.e. He has a brain the size of a melon, (and maybe a head like a f***ing orange) arms and legs and a penis (just sayin'), is now defined by many believers as 'God is love', rather than the great old man in the sky.

Amazingly perhaps, this idea of God has continuing traction because, unlike say the traditional Judeo-Christian version, it's essentially un-falsifiable. Any subjective reading of the Bible should see it set firmly in the rich Mediterranean 'god-man' myth tradition, where other 'Gods' like Mithras, Horus, Hercules and Dionysus all compete in the marketplace of the invisible. Yahweh or Jehovah, or his wife or Asherah, were no more 'real' than their rival God Baal, but through a series of historical twists and turns, only Yahweh survived as the 'one true God', and the Christians tacked on Jesus for extra selling power. The Gods of the Greeks and Romans and Egyptians and Jews were utilitarian, and their following waxed and waned roughly in line with the nations fortunes. The Old Testament is best summed up as, "Worship me or you will suffer in this life",  by a vengeful and threatening man in the sky, whereas the Jewish sect that syncretised into the Christians expanded that threat into the next life and beyond.... into eternity. Nice guys.

The 'God' concept is essentially a poetic/romantic proposition, and I contend (and maybe Gervais does too) that the argument the religionists need to have is with the poets and the writers of myth, not with scientists. Gervais touches on several key issues, including theodicy, or the problem of evil, which points up the inherent paradox of the omnipotent God proposed by believers. At one level believers say, God is all good, that he created everything etc, and when confronted with the fact that 'evil' exists in the world, they simply blame humanity for the bad stuff. The problem is, if God is all good, and once there was only God, (prior to his universe creating effort) then evil could only exist if that God created it. A human created by an all-good God would not be able to make an 'evil' choice because nowhere in the production process could evil have been introduced to contaminate the product. The putrid aspect of this philosophy is that it credits all the good stuff to the invisible creator, and all the bad stuff to us.

Ricky Gervais is a self-confessed atheist, and his description of the day the penny dropped is poignant and revealing. Ricky's mum was reminding him that God saw everything and he better behave himself, when his older brother overheard and said "You're not still telling him that rubbish",  and Gervais describes the impact, not of that statement, but of his mother's response. "Bob",  she said scoldingly, and in that instant Ricky knew he was being conned. Gervais invests his intellect and passion into this project, but doesn't skew the piece by weighing it solely against believers, merely revealing the emptiness behind their philosophy. Gervais gives his best performance as an actor in this key scene with his mother, it's tender, heartfelt and authentic.

In The Invention of Lying  Gervais affirms, in the most direct manner, that the human trait of empathy is what drives us to make choices based on a wider good. In purely Darwinian terms this is a choice for self-interest, as empathy (and it's higher state of love) contributes positively to the survival of the species. Religionists are prone to see love as a 'god' given characteristic, which insults the achievement of humanity in evolving empathy into that higher state.

Love, in all it's forms, flaws and glories, is human, the extrapolation of animal empathy. We can reduce it to Darwinian utilitarianism if we like, but that denies it's transcendent dimension. An existentialist will find meaning in the life he lives, and ascribe meaning to its different dimensions, but no 'invisible friend' will be involved. Atheists can find beauty and wonder in the universe, and sublime connection to others, even to abstract ideas and concepts, no God is required. Love is of us and in us, and directing the credit to the empty heavens negates the hard won evolution of empathy into it's sublime highest form of unconditional love.

Musically, Gervais proves to be a master at matching the right song to a scene, like Martin Scorcese, or Paul Thomas Anderson. It's a talent he again exhibited in the charming Cemetery Junction  a few years later, but here he excels with the use of the mystical Donovan folk song Catch The Wind,  and the sublime Sitting  by Cat Stevens. Despite the intended spiritual overlay, by the future Yusef Islam, Sitting  can be experienced by atheists in a transcendent sense, every bit as much as religionists, a point mostly lost on believers, who decry the 'angry, empty' atheist stereotype. These two songs demonstrate why music speaks where words leave off, as beyond the wonderful poetry and imagery of both, they belong to anyone with a poetic heart and romantic mind. In this context Gervais even makes ELO's Mr Blue Sky  seem cool, when years ago it just seemed naff, and that's some sleight of hand.

In a universe that is fully automatic and self-regulating, where the laws exist because they work and not the other way round, creating a universe that is the only one that can exist, God is both not seen, and not required. Religion is easy to satirise, and Gervais makes some neat and comic observations, adding in a love story sub-plot, but he also understands the frustrations of bumping into an irrational belief that diminishes us as a species, and holds us back unnecessarily. The Invention of Lying  makes the case for humans not to blindly accept 'holy writ', even if it's passed down on empty pizza boxes. In an era where English born radical Muslims are hacking soldiers to pieces in suburban streets, where disconnected émigrés are blowing up marathon runners in Boston and where an old Pope in a frock is casting out invisible demons in kiddies by touching them, all in the name of this God, we still have a ways to go. Makes you think doesn't it?

Just because a lie is comforting, doesn't make belief in it acceptable. Belief and investment in the 'beautiful lie' diminishes us all, give your energy and love to another human and don't waste it on the empty and silent heavens. 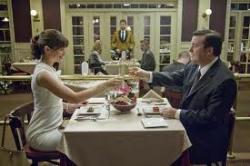 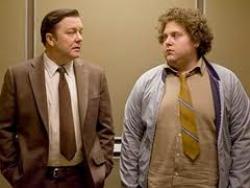 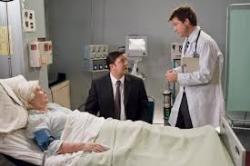 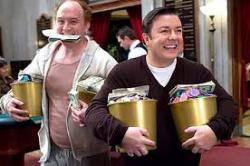 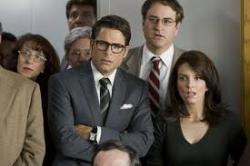