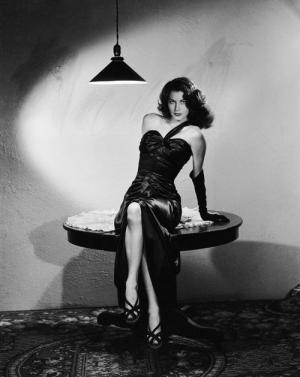 Famed Broadway writer and columnist Mark Hellinger returned after a Second World War stint as a war correspondent to a different Hollywood than the one he left. During the late ’30’s  he had a producer’s tenure at Warner Brothers and delivered some of the most notable examples of the crime/gangster genre, The Roaring Twenties and High Sierra amongst them. The latter led to a friendship and eventually a production partnership with star Humphrey Bogart, but in the interim Hellinger signed a deal with Universal that saw him morph his penchant for crime stories into the muted tones of the film noir landscape, and his first venture into that dark territory remains one of the most compelling, an adaptation of  Hemingway short story, The Killers.

Hellinger had Anthony Vieller adapt the book and also had his friends Richard Brooks and John Huston work on the screenplay, Huston un-credited because of an exclusive contract he had with Warners, which caused a stir when the writing was nominated for an Academy Award, ’let’s hope it doesn’t win’ said Huston. It didn’t. Universal vetoed a young director called Don Siegal that Hellinger wanted, and Robert Siodmak was signed on to direct and, like Billy Wilder, his German Expressionist background perfectly suited the shadow world of noir that the film explored. Burt Lancaster was cast as the lead, and his particular screen presence and charisma ensured he became a star virtually overnight.

The film opens with two thugs intimidating the staff of a small diner, openly bragging that they are in town to kill Ole, ‘the Swede’ (Lancaster), and as this is his regular haunt they’ll wait for him. When it’s apparent Swede is not coming they go looking for him, and one of the diner’s customers runs to Swede’s apartment to warn him. Ole is in shadow, but says calmly, ’there’s nothing I can do, I did something wrong once’… and stays lying on his bed to wait for the killers. Reardan (Edmund O’Brien) is an insurance man who looks into the death as the policy on Ole pays off to a cleaning maid in Atlantic City, but when questioned she only met Ole once, and saved his life as he was about to jump out of a hotel window.

In flashback we see a distraught Ole smashing up the hotel room, and that leads to Reardan investigating further back and uncovering Ole’s life as a boxer and the reason he was suicidal. Sam, (Sam Levene) a cop friend of Ole’s from the same neighborhood fills in more of the puzzle for Reardan, relating another incident involving Ole taking the rap for stolen jewelry for Kitty (Ava Gardner) the girl of gangster Colfax (Albert Dekker) and doing gaol time. In flashback we see Ole meet Kitty, a stunning dark haired singer in a black dress that would stop traffic in any era.

Ole is cajoled by Kitty into taking part in a payroll heist, thinking he’ll be able to set up with Kitty after the job, free of Colfax. Siodmak brilliantly shoots the robbery in one unbroken, fluid and breathtaking camera move for over two minutes that encompasses the gang arriving at the site with dozens of workers, making their way up to the money room, taking the loot and making their escape, shooting it out with the guards, a heist sequence rarely matched. Of course the aftermath is not straightforward, and Ole double crosses Colfax and ends up in the hotel room at Atlantic City with Kitty, only to be triple crossed by her as she returns to Colfax. Ole knows Colfax will settle the score for the double cross, and this is what led him to his fatalistic choice.

The lure of this film doesn’t diminish with time, so strong is it’s sense of atmosphere and place, framed and paced perfectly, exquisitely shot by cinematographer Elwood Bredell. The audacious structure of the film means the audience is cleverly given the same motivation as that of the Insurance man, as his is not so much professional, it’s purely human inquisitiveness, ‘why does a man who knows death is coming do nothing’? Ole’s decision threatens the philosophical world view of a man like Reardan, and by implication the audience, and it both fascinates and terrifies him. If this man accepts an ‘honourable’ death for such a ‘dishonourable’ deed, what does that say about the rest of us? This is the dark and existentialist dilemma at the heart of the puzzle, and it’s delicately placed before us without pat or easy answers, making the actual fate of Colfax and Kitty redundant, as it’s Swede’s shadow which looms largest over this gritty tale.

Lancaster is superb as the not-too-bright ex-fighter, who couldn’t see that cross and double cross added up to a triple cross, blinded by Kitty’s beauty. Lancaster proved an incredibly durable star, able to make populist, crowd pleasing fare, and equally able to investigate the off-beat, and the elegiac bookend to his youthful gangster era parts was his moving portrayal of a small time aging mob guy in Louis Malle’s brilliant Atlantic City in the early ’80’s. Ava Gardner also became a star with this film with a strong and memorable performance, and once seen in that dress you are reminded of the line from a James M Cain novel, ‘brother, I’ve seen her, I might kill for that myself’.

Hellinger went on to make four films for Universal under this contract, using Siodmak and Lancaster for the next effort Criss Cross, then switching to Jules Dassin as director of the next two, with Lancaster in the brilliant prison break film Brute Force and finishing up with the vibrant location shot The Naked City in his native New York. He died young before his production company with Bogart had a chance to get off the ground, but The Killers remains a high point of a remarkable and enduring legacy. 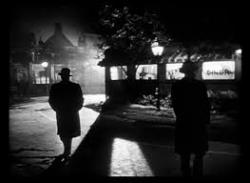 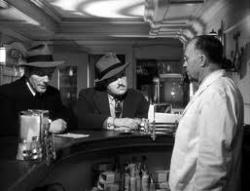 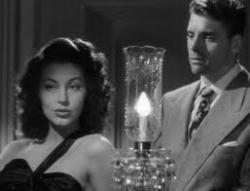 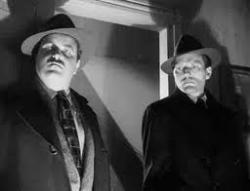 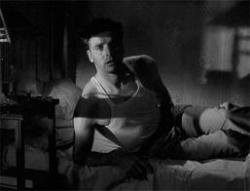 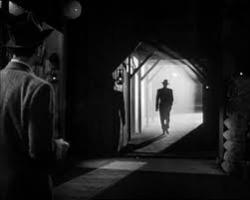