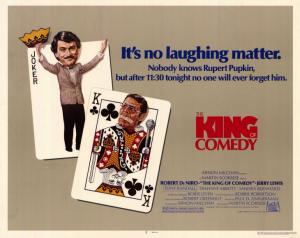 The King of Comedy

Martin Scorsese was given the script to 'King of Comedy' by Robert De Niro as a proposed project in 1974, over 10 years before they eventually filmed it. Scorsese said he didn't have the experience with fame to fully invest in it during the '70's but 'Raging Bull' changed all that when he became a famous director in his own right, and presumably it rang a few bells with superstar De Niro well before that. Scorsese apparently wanted to follow up 'Raging Bull' with De Niro playing Christ in his pet project 'The Last Temptation of Christ', but thankfully De Niro demurred and  they were able to agree on a New York shoot for 'King of Comedy', avoiding the complications of a writers strike out in California. The script was by a former film critic with Newsweek, Paul Zimmerman, and to further the Dylan 'connection' Robbie Robertson again produced the soundtrack for Scorsese, his fast friend after the brilliant The Band doco 'The Last waltz'.

Rupert Pupkin (Robert De Niro) is a comedy legend in his own mind, a mind increasingly unable to discern between reality and fantasy as it happens, and is one of the many stage door wannabe's that hang outside the exit of 'The Jerry Langford Show'. Langford (Jerry Lewis) is a Tonight show television giant  (essentially Johnny Carson, who was offered the part but turned it down) and every evening he runs the gauntlet from the door to his limo. Obsessive fan Masha (Sandra Bernhard) manages to get into the limo and after she's evicted Pupkin ends up helping Langford until he escapes, but with Pupkin as an unexpected extra. Pupkin uses the opportunity to pitch his talents to Langford, who promises him his people will look into helping him in his career if he's any good. Pupkin then hassles Langford's office until his ineptitude leads to a rebuff, at which time he hatches a scheme with Masha to ensure his success.

The key to making 'King of Comedy' work is it's admission that the American dream is a myth, that you can 'have it all' if you want it badly enough and are prepared to work for it, a message particularly apt in 1983 as America embarked on it's 8 year love affair with Ronald Reagan. Pupkin states that 'A guy can get anything he wants as long as he pays the price', and he sets out to gain his fame, which costs him nearly 3 years in prison. In the fantasy sequence where Langford pleadingly and jealously asks him 'How do you do it'? Rupert replies 'I look at my life. I see all the terrible things in it and I turn it into something funny'. Rupert commodifies misery, he's willing to package and sell his own pain in order to attain notoriety, 'to be somebody'. Scorsese again essays his 'lonely man' view of the world, Travis Bickle in 'Taxi Driver' and LaMotta in 'Raging Bull' were both isolated men, struggling in a world of rules and codes that they can't subscribe to, or even understand in Pupkin's case. Scorsese would again take to the idea with the brilliant 'After Hours' a couple of years later, and maybe Jesus Christ was the loneliest man of all?

Scorsese saw in Pupkin a trend to an all consuming 'celebrit-ocracy', where notoriety was more important than talent and fame was the ultimate aphrodisiac, and given the 'Jerry Springer' bizarro reality TV world that's evolved in the interim the film now seems incredibly prescient. Masha's unhinged dark side seems only a step or two away from Pupkin's seemingly benign delusions, but looking at the neediness of the psychological state they both exhibit it's not too much to imagine Mark Chapman started down the same path before he determined that HE was the real John Lennon and went to the Dakota building in 1980 to take Pupkin's fantasies to the ultimate tragic conclusion. Bernhard's energy and mania bring a terrible reality to a darkly comic scene where she has Langford at her mercy, and her dressing him like a doll in a red jumper she's knitting for him is even more scary at it's core. The passive/aggressive area of both her and Pupkins' personalities is given full vent, and the satire sparks best at these moments. Scorsese adds a piquant verisimilitude to proceedings by casting several cameo's, including his own, but sly use of Tony Randall, Victor Borge and Dr Joyce Brothers adds to the overall prognosticative effect. There are many beautifully observed small touches to go with the set pieces like Rupert's TV wedding sequence, as in the telling moment where Rupert's would be girlfriend realises they have not been invited to Jerry's house in the country, she apologises and leaves, but steals a keepsake just the same. Touché.

Jerry Lewis is fantastic as the TV host, a whole lifetime of information is invested in the nuanced and superbly realised performance, a dramatic highpoint for a man not known for playing either the straight man or drama. Bernhard is brilliant as the edgy Masha, her dinner table rendition of  'Come Rain or Come Shine', a re-incorporation of her clawing hands opening sequence, is worth the price of admission alone.  It's De Niro who carries the film with his keenly observed Rupert, showing a range post LaMotta that ensured he would never be typecast. The difficulty in playing fantasy scene versions of Rupert where he is commanding, and matching the real scenes with a neurotic shaded version of the same person shouldn't be underestimated, but he pulls it off superbly. De Niro, like Jack Nicholson, has a personality that audiences prefer to see in certain types of roles, and it seems that klutzy, comedic geek was not one of them as the film never found favour with the public. Scorsese films the New York locations with a feeling for the city that can rarely be matched, giving us a personal New York rather than a sanitised tourist board version, using the bemusement of passers by as fodder for his lens, particularly with De Niro and Bernhard arguing outside the BrillBuilding.

A critical hit at the time of it's release and since, the box office flop it generated meant, to Scorsese at least, the end of a personal kind of filmmaking and from then on he looked towards many projects with a commercial eye, firstly with 'After Hours' where he proved he could make a low budget feature, and then to the expanded bravura style of 'Goodfellas', where it's profitability ensured his ongoing viability as a director who could make money for the studios. A lot of celebrities hated the fact that Pupkin's actions were seemingly rewarded ultimately, and it's sure that security surrounding many celeb's post Chapman, and then post 'King of Comedy' must have spiked suitably. Scorsese created a truly scary, black comedy that gave everyone paying attention pause for thought. Great film. 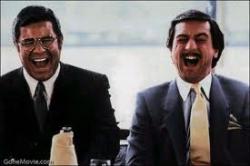