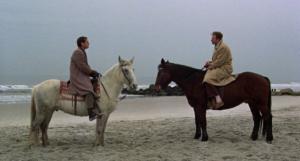 The King of Marvin Gardens

Bob Rafelson's tone poem on sibling love and the illusion of the American Dream, set in a run down and decaying Atlantic City in the early 1970's. For non American audiences it should be noted that Marvin Gardens is a property in the American edition of the board game 'Monopoly', it is a misspelling of the actual Marven Gardens, and so to be it's king is to reign over something that doesn't exist. Jacob Brackman wrote the script, he was best known at the time as Carly Simon's lyricist, and it's a shame he didn't write more screenplays on the strength of his work here. Rafelson cast Jack Nicholson and Bruce Dern as the brothers, and they form one of the most potent double acts in the entire American Renaissance period. Lazlo Kovacs shot the film, in muted hues and wintry tones, as they play out the action during the winter months when all the tourists are gone. Rafelson and Nicholson had scored a hit with their previous effort, Five Easy Pieces, another sombre reflection on existential angst.

David Staebler (Jack Nicholson) is shown in extreme close up, delivering a monologue about a childhood incident with his brother and a coughing and choking grandfather. After some 5 minutes we become aware that he's a late night radio host doing his broadcast, until he's interrupted by an assistant. The call relates to his brother Jason (Bruce Dern) wanting him to come out to Atlantic City to discuss a big business deal.  David arrives to be greeted by Jason's girl Sally (Ellen Burstyn) as Jason is in gaol. Jason gets out on bail and outlines his dreams of owning a hotel and casino on an Hawaiian island to David. Sally's step-daughter Jessica (Julia Anne Robinson) completes the quartet, who take rooms in one of the run down hotels while Jason attempts to put arrangements for the deal in place.

Life's a game for Jason, who mentions the Monopoly connection to David when they first meet, and it is again reinforced when Sally and Jessica shoot Jason with toy guns in their bedroom where the three enjoy their sex games while David is left outside. David discovers Sally and Jessica came as a 'package deal' and Jason is intimate with both women, and the theme of old making way for the new as Sally ages and Jessica becomes the 'meal ticket' becomes more important as the action plays out. Rafelson shows the distance between the brothers at the outset as David's awkward embrace of Jason demonstrates, only after many up's and down's over the course of his stay does David loosen up enough to respond emotionally as Jason says "I love you" and David responds, "I know".  A thematic concern is the inability to bridge a gap because of one brother's emotionally based thinking, and one brother's intellectually based logic, the best they can do is admit the reality of the situation and attempt to find common ground and mutual meaning somewhere between David's life of the mind, and Jason's life of the heart.

Sally's deterioration over the course of the narrative is sourced back to her fading looks, like the city they inhabit she no longer is a star attraction and instinctively knows the future belongs to Jessica. Burstyn is exceptional as she negotiates the manipulation of Jessica's affections, the step-daughter is just another pawn in the game she plays with Jason. David also realises the parallels of his situation with the gamine Jessica, "sleepwalking along on someone else's life" is how he puts it, and with his level of self awareness he knows he's describing his attachment to his older brother who he admitted was his 'hero'. Burstyn is brilliant in a scene where Jason and her are burning all their winter clothes as they won't need them in Hawaii, but when he says "c'mon, there's nothing left to throw into the fire"  and leaves, she stays on the beach and starts to cut off her long hair and throws it in too. It's a breathtaking and touching moment, and of course the depth of the gesture is lost on Jason. Jason's dreams unravel as they do every time, and amidst recriminations and arguments the tragic conclusion arrives as the ultimate reality check. David returns to his life as a radio host and delivers the Atlantic City story as a monologue, this time he's emotionally connected as opposed to the intellectually detached opening monologue.

The acting in 'The King of Marvin Gardens' is special, Nicholson is great as the timid 'nerd' brother, a reminder that his 'Jack' persona was yet to emerge in the way we now think of him, and most of his roles prior to 'The Last Detail were of the more thoughtful and sensitive type. His monologues are a highlight. Bruce Dern is magnificent as the hustling brother with delusions of adequacy, and like a game show host keeps talking even when he's lost for words. Robinson is fine as the brittle ingénue,  but the films acting honours however belong to Burstyn and her 'middle aged kewpie doll', surely one of the finest performances in the cinema of the time, moving and involving, and reason enough to watch.

Rafelson has created a rich and detailed tapestry with this piece, paced in a languid European art film way, and full of insightful and offbeat vignettes and images, exploring it's existentialist tropes with a keening lens. It's also a film about the emptiness of the promise of the 'American dream', revealed to be a manipulative myth in the narrative framing of the gangsters that exist behind the scenes of 'legitimate' business, forever using schmucks like Jason who continually fall for the same three card trick in the hope that one day he is dealing from the stacked deck and no longer playing the sucker cards. The scene where the quartet stages a beauty pageant speaks to the heart of this superficial society and it's hollow values, to the tawdry dreams where Jason is the next 'Conrad Hilton' and Jessica is a pageant winner. In an era now where buffoons like Donald Trump run a kind of 'celebritocracy' who's to say Rafelson and Brackman's  prescient vision was not on the money?

'everything dies baby, that's a fact'