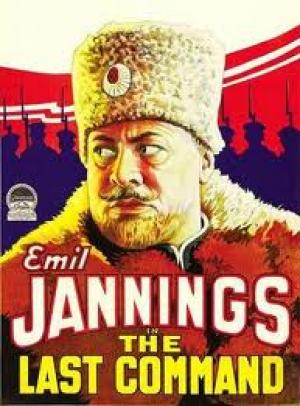 The story of this film has a somewhat convoluted history, but it is worth trying to get it straight. Ernst Lubitsch had met a former officer of the Tsarist army named Theodore Lodijensky who had become a Hollywood extra. He thought this would make a great story for newly-arrived German star Emil Jannings who specialized in roles where he fell from the heights to the depths, as in Murnau’s Der Letzte Mann.  A few days later, Lubitsch heard the same story from screenwriter Lajos Biro who credited it to Jannings. Biro did a treatment, and John S. Goodrich wrote a screenplay. Jules Furthman and Sternberg made extensive changes to the script and Herman Mankiewicz wrote the titles.

The film was made with a number of important changes from the published Biro-Goodrich script. An obscure writer then appeared claiming, with apparently convincing proof, that it was his story and had been plagiarized. Paramount settled out of court and tried to blame Lubitsch, but he said that since he had been denied credit by Jannings, Biro, and Sternberg, he would not accept it now. Paramount decided to blame Sternberg; he had better have a bigger hit than The Last Command  turned out to be, and soon. It had been a highly praised prestige picture, and Jannings won the first Best Actor Academy Award for this performance along with that in The Way of All Flesh  which, speaking of writers, had very little to do with Samuel Butler’s celebrated novel of that name.

The first half of the film takes place during the revolution in a Russia that is as much of Sternberg's imagination as would be his later Morocco, China, and Spain. William Powell and Evelyn Brent are actors and revolutionaries. Her mission is to get close to Jannings' general and shoot him. He falls for her big time, and when the time comes for her to pull the trigger, she cannot. In fact, she helps him escape from the triumphant Reds. Cut to some years later in Hollywood where Powell has become a successful director shooting a film about the revolution. The meeting of the former foes brings a powerful climax to Sternberg's musings on illusion and reality.

The weakness of The Last Command  is that the leading woman disappears from the California section, a mistake that the director would never make again. especially in his films with Marlene Dietrtich. Of course, the story does center on the general, but already we can see the increasing importance in Sternberg's work of The Woman. Incidentally, Evelyn Brent was never as beautiful or as powerful on the screen as she is in this film. 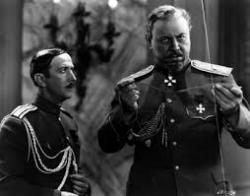 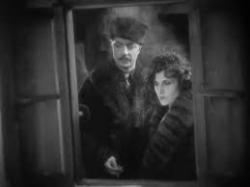