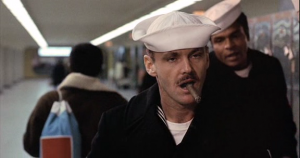 Hal Ashby had won an Oscar for editing with Norman Jewison's 'In The Heat Of The Night' in 1967, and encouraged by Jewison he made a move into directing a couple of years later. His first critical success came with his second feature, the very off-beat 'Harold and Maude' in 1971, and his next film, 'The Last Detail' became his first commercial success. Robert Towne wrote the screenplay from the novel by Darryl Ponicsan, tailoring the lead role of 'Bad Ass' Buddusky for his good friend Jack Nicholson, and it's a part that fits him like a glove, (middle digit rampant) as did their next collaboration, Polanski's immortal 'Chinatown'. Nicholson fought for Ashby to direct, who the studio mis-trusted, and given the problems they had over getting the film off Ashby and out of editing they were right. Ashby promoted his camera operator, Michael Chapman to DOP as both Haskall Wexler and Nestor Almendros were unavailable and Chapman went on to have a fine career shooting 'The Front', 'Jaws', 'Taxi Driver' and 'Raging Bull' et al.

The action kicks off with the mundane life at a Naval Base in Norfolk, West Virginia, a 'shit' detail is required and two 'lifer's' are being rounded up. Revealingly Buddusky is asleep when found, though chewing on a cigar, and Mule (Otis Young) is ironing his shirts, so Ashby has already given us clues as to their nature. The detail is to escort a young sailor to the brig at Portsmouth, they have five days to do it, it should take them two. The offender is Meadows (Randy Quaid), a kleptomaniac who attempted to steal money from the donation box for the Admiral's wife's favourite charity.

Bad Ass and Mule take Meadows via bus to Washington first and en-route get to know a little about him, as they do each other. True to character Mule just wants to do the job and get back to Norfolk, but Buddusky is appalled that the kid drew eight years in the brig for a petty crime, knowing that such an innocent as Meadows won't stand a chance in Portsmouth. Budussky persuades Mule to take some time en-route and maybe have some fun, starting with visiting a bar in Washington that he knows The belligerent barman refuse to serve the under-age Meadows, and insults the African-American Mule 'the law says I have to serve him'. Buddusky sees red and slaps a pistol on the bar, telling the barman his fortune before they spill out on the street with Buddusky hooting 'I am the bad ass'! The first of several bonding episodes for the three men.

Ashby handles all the situations with great feeling, enabling the dimensions of the characters to shine through. Badussky encourages the kid to visit his mother en-route and they go out of their way and his expectation builds, but in a poignant reveal the only thing they find is an empty house cluttered with whiskey bottles, 'I wouldn't have known what to say to her anyway' is Meadows melancholy summation. They go on a bender in a hotel and Buddusky starts to teach the kid semaphore, as they all get progressively more incapacitated. Buddusky lashes out at one point smashing his fist into the wall, frustrated on the kid's behalf about the injustice being heaped upon him. They have a knock down brawl with some Marine's in the Penn Station lavatory in New York, Meadows earning his stripes, and sample the best sausage on the planet near Washington   Square. Ashby addresses the political implications of the Vietnam era piece by having Mule bailed up by some 'hippies' in a house they are led to by a Buddhist who befriends Meadows. The strength of the piece is that it condemns the 'bureaucracy' of the military without condemning the men who serve under it, the film making it plain that working class men don't set foreign policy, and indeed are just as much victims of it as the rest of the country.

The group arrive in Boston, the brig at Portsmouth beckons, but one last hurrah is decided upon, Buddusky and Mule will take Meadows to a brothel to get him laid. In a tender scene with the delicate Carol Kane, Meadows achieves the kind of connection that's eluded him before and the guys are satisfied they've provided him with some memories to make his incarceration a little easier to bear. Meadows wants to keep each event 'special' and requests that they have a picnic before the final journey. In a tragic-comic  sequence where they attempt to grill hot dogs in sub zero temperatures Meadows makes a break for it, and at that point we're unsure as to whether Buddusky would shoot him as he draws his pistol in pursuit. he final scene at Portsmouth involving incomplete paperwork, as the Junior Officer attempts to haul the two 'lifer's' over the coals is a bitter-sweet reminder of the mundane bureaucracy that military institutions actually are, and it gives Mule and Buddusky some satisfaction to be able to turn the tables before they march off the resume normal duties.

Superficially Buddusky is the 'counter culture' rebel for '60's era audiences to root for, but the real tragedy is that he is a free spirit who has voluntarily signed up for a life of taking orders. Ashby reveals the inherant paradox in many subtle ways, the conversation where Buddusky admits to Mule he has been married, only to bridle at her wish for him to get a trade, only underlines the contradictions that contribute to Buddusky's dilemma. He lashes out at authority, yet has chosen a path that condemns him to have to admit to an outside discipline, possibly acknowledging the lack of it within, therefore his own need leaves him no alternative but to have it imposed from without. Mule understands the rigours of the Navy are good for him, coming from a poor background he had few alternatives from a socio-economic viewpoint, rather than Buddusky's psychological angle. Meadows is a tragedy here too, mentally ill-equipped for life in the Navy, indeed an obviously un-diagnosed condition of kleptomania should have seen leniency in his sentencing, but he's seen a grist for the mill, sacrificed on the altar of the CO's vanity.

Nicholson deservedly won Best Actor accolades, including Cannes, but the Oscar eluded him much to his chagrin. His central performance as Buddusky set on track the quintessential Nicholson persona as prior to this his character's were more or less effete and intellectual, indeed it was the edge he displayed here that would convince the producer's of "One Flew Over The Cuckoo's Nest' that he was the right man for them and worth waiting for, a part that would provide Jack with that elusive Oscar. Otis Young is solid as a brick wall in support and Randy Quaid, seen as a goofy geek briefly in 'The Last Picture Show', was peerless as the awkward but endearing Meadows, hitting every note required to make the pivotal part work. Ashby never looked back after this through the '70's and would go on to have 3 Best Picture nominated films in a row, before losing momentum in the '80's. 'The Last Detail' is a multi-layered masterwork, succinctly encapsulating many of the contradictions in military institutions and the people who inhabit that world, Ashby creating a real and humanistic viewpoint with which to engage the issue. Un-missable. 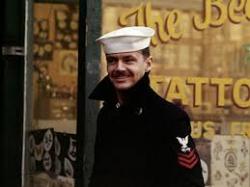