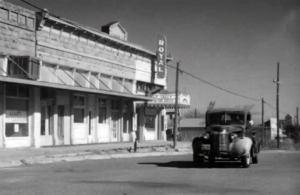 "Tremendous beauty and tremendous ugliness puts you on the outside of things." ~ Peter Bogdanovich

Mirroring the Nouvelle Vague path of film critic to director, Peter Bogdanovich was a precocious member of the film brat generation that went on to re-shape Hollywood in its image during an era that can rightly be called the American Renaissance, a period roughly between 1967 and 1980. Bogdanovich’s debut feature Targets was remarkable enough, using all his wiles to extract a believable scenario that involved using Boris Karloff for two days, Orson Welles on the screenplay and casting himself as a young director to save money. Bogdanovich’s second feature, The Last Picture Show  oddly owes it existence to The Monkees TV show, financing as it did Bert Schneider and partners BBS production company and its various ventures into feature film, and this effort may represent the pinnacle of their achievement, one of the most stunning and affecting films from a golden era of American film.

America at the time was going through the wrenches of Nixonian duplicity, particularly in relation to the Vietnam war and the administrations hard-nosed response to counterculture protests. Against this backdrop an anti-Happy Days view of 1950's small town American life may have provided an unexpected contrast and insight to the mythology of American Exceptionalism. Larry McMurtry wrote the screenplay with Bogdanovich from his own novel, and managed to capture the ennui and frustrations of life in the 1950’s in a small country town, and upon the advise of Orson Welles it was shot in black and white, by veteran cinematographer Robert Surtees, who learnt his craft assisting Gregg Toland no less, giving the final look a suitably elegiac feeling.

Echoing the values of Italian neo-realism the film centres on the small Texas town of Anarene, and the complex web of inter-relationships in a place where everybody knows what everyone else is up to. Bogdanovi ch opens with a shot of the town picture ‘palace’, The Royal, currently showing the conservative ‘Father of the Bride’, as Sonny (Timothy Bottoms) drives through the empty, dusty street in his pick up truck and listening to Hank Williams as he spies young Billy, a retarded boy, happily sweeping the street to no effect. Sam the Lion (Ben Johnson) who owns the picture theatre a pool hall and cafe, engages the boys and takes them into the pool room for a soda, establishing his ‘fatherly’ presence. Duane (Jeff Bridges) is Sonny’s best friend and they take their girls to the picture show, Sonny kissing his unpleasant girlfriend while looking at the screen Liz Taylor, a symbol of the unattainable other and Duane dealing with the spoiled rich girl Jacy (Cybill Shepherd). Sonny breaks up with his girl that night, sensing that a life with her will be surrendering to mediocrity, and is consoled by Genevieve (Eileen Brennan) the worldly manager of the cafe, Sonny suddenly aware of her middle aged curves, underscoring his adolescent frustration. Jacy’s mother Lois (Ellyn Burstyn) fears Jacy is heading down the same unfulfilling path she is, and encourages her to drop Duane, the good looking high school sweetheart. Lois is having an affair with Abilene (Clu Galager) who is working for her rich husband, but wants another life for her daughter.

Jacy drops Duane at a Xmas party in favour of a rich kids pool party where she has to strip naked as price of admission. Jacy is prepared to humiliate herself in order to get close to the rich boy but he is not interested in her while she’s still a virgin. The young boys of town disgrace themselves in the eyes of Sam by treating Billy to an episode with a fat prostitute that doesn’t turn out well.  Sonny hooks up with Ruth (Cloris Leachman) the coach’s wife at the Xmas party, the two having shared a connection when Sonny had driven her to a Doctor’s appointment. Ruth comes alive under Sonny’s attentions, and Sonny has at last found something authentic, if unconventional. Sonny and Duane take a spur of the moment weekend trip to Mexico and return to the sad news that Sam the Lion is dead. Jacy attempts to have Duane de-flower her so she can pursue her ambitions, but he wilts under the pressure!  Duane leaves town and Jacy sets her sights on stealing Sonny from Ruth, something she achieves with ease, but causing no end of disruptions when Duane returns to visit, the two friends fighting and Sonny is badly injured. Jacy elopes with Sonny, but arranges for her parents to find out so that she is brought back by the police with great notoriety, to her immense delight. Sonny drives out of town after Billy is killed in a accident on the street, but turns around to face what he’s done to Ruth.

The episodic vignettes could easily descend into cheap soap opera, but Bogdanovich was a student of Renoir and Ford, and he invests them with such delicate nuance that they resonate as truthful and believable at every level. The tiny details, the creaking of the old bed that underscores Sonny’s first time with Ruth, the brilliant use of country songs on the soundtrack that counterpoint and heighten the narrative (‘Faded Love’ to accompany Jacy’s farcical elopement), Jacy gripping the pool table pockets as her mother’s lover has sex with her in the deserted parlour. The many tiny, brilliantly observed moments combine to fill a canvas uncovering the empty lives and of the inhabitants of Anarene. The heart of the piece is Johnson’s Sam the Lion, ironically he had to be talked into taking the part by John Ford, "you wanna play second string to John Wayne all your life?"  Johnson is superb as the rock solid conscience of the town, relating to the boys as he helps shape them into men, "you won’t believe how much this country has changed." Sam wistfully remembers a married woman he loved, and the real moments they shared, something that resonates with Sonny. Later Sonny discovers that woman was Lois, and she recalls the affair as the one real time of her life, a memory of something that she can cling to amidst the boredom and repetition of daily life.

The cast is uniformly excellent, Bogdanovich handling the ensemble with a sure hand. Newcomer Shepherd (a glamour model in her first film and in best cliché tradition she had an affair with her director!) unearths the vanity and capriciousness of her spoiled girl character, and Bottoms is superb as the good hearted Sonny. Cloris Leachman is heartbreaking as the older woman who finds a true connection, only to lose it to her younger rival, and deservedly won the Best Supporting Oscar, as did Johnson for his Sam the Lion.

Bogdanovich fashioned an incredibly mature work, dimensional and considered in a way that was more European in its pacing and depth than American. He proved himself a classicist in that his style emulated the past masters like Renoir, Hawks and Ford, rather than some of the more cutting edge techniques favoured by his contemporaries. The milieu of a wasteland inhabited by inarticulate people, struggling to find ways to communicate and make sense of their environment turned the film into an existentialist masterpiece. Bogdanovich held his nerve to keep that sombre tone, to hold shots when others would have cut, to back his inexperienced actors, most of whom went on to stellar careers, and the results are one of the seminal films of a fantastic era, and a valentine to classic American cinema. Bogdanovich has Hawks’ Red River close the picture show as the last feature presented, and Bogdanovich ironically shows the ‘myth’ of the west as John Wayne heads a mighty herd out onto the open freedoms that the wide horizon offers, after having shown us for two hours the crushing reality of western life. Superb. 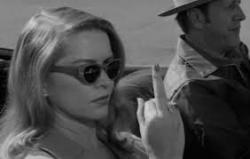 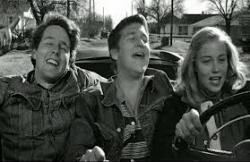 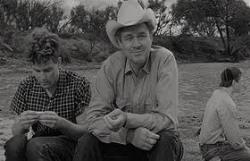 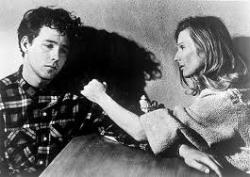