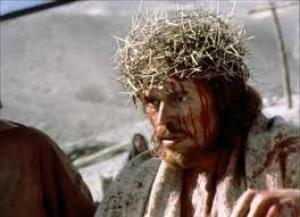 The Last Temptation of Christ

The Jesus myth has been historically well served by the propaganda machine of Hollywood, and in one sense Martin Scorsese’s epic examination of a dimension of that story falls neatly in lock step with that uncritical tradition. Scorsese had long harboured an ambition to film Nikos Kazantzakis’ 1951 novel ‘The Last Temptation of Christ’, and got the first version to within a week of filming for Paramount in 1983. A huge protest movement initiated by the Christian right saw that film, which was to star Aidan Quinn as Jesus and Sting as Pilate, cancelled. After a couple of low budget projects. in the cash strapped environment of the early ‘80’s. he convinced Universal to stump up the 8 million dollars required and in 1987 he started again. The unlikely Paul Schrader had done the first adaptation of the novel, his Travis Bickle having been something of a dark messiah, and Scorsese used Schrader’s work as the basis for the final film. Willem Dafoe took the part of Jesus and David Bowie that of Pilate, Barbara Hershey and Harvey Kietel stayed on in their respective roles of Mary Magdalene and the rambunctious Judas.

The story is so well known it hardly needs reiterating here. Scorsese focuses on the last part of the mythical ministry, incorporating some well known vignettes such as the wedding at Canae and the raising of Lazarus. Jesus gets into trouble in Jerusalem, throwing out the moneylenders in the temple, and gets his trial before Pilate. The narrative takes on political as well as spiritual overtones, and delineates the argument neatly between the corporeal and the ethereal. Judas represents the earthy, the political and the combative nature of man, whereas Magdalene represents the promise of love and of continuation of life. Scorsese, possibly sensing more trouble from the fundamentalists, begins with a disclaimer, stating the film is not based on the Gospel version of Christ’s life, which is obviously incorrect as the film strays not one jot from the Gospel narrative, it merely gives slightly more emphasis on the human dimension of the Jesus character. What is more telling is the passage from the novel that appears before the disclaimer, which reads…

“My principle anguish and source of all my sorrows from my youth onward has been the incessant, merciless battle between the spirit and the flesh…and my soul is the arena where these two armies have clashed and met”. Nikos Kazantzakis

The Jewish religion, at the time the Christ story is set, was a mess of sectarian division, and religions generally had split into two distinct camps, the utilitarian and the esoteric. The Mediteranean gods of the time were changing from the Old Testament types, sky-gods like Baal and Yahweh, avatars of strength and superiority that were typically embraced because a nation could prosper under a ‘strong’ god, to the god-men figures of Mithras and Dionysus, who walked among mortals, taking on the characteristics of men. The Jesus myth fits neatly into the latter, where after 300 years of interaction with the Greek idea of gods walking amongst us, the Jewish tradition came up with it’s own variant, embraced by the splinter sect who became the Christians. The figure of the Messiah is an old idea in Jewish theology, and unsurprisingly there have been many claimants, both pre-dating the Jesus story and well after. The Christ story is of the struggle between these ideologies, the flesh versus the soul, in the highly charged political environment of the time, that of Roman occupation

The struggle between the allure of the flesh, and the idea of a ‘higher’ purpose is where the strength of the piece resides. The Jewish faith of the Old Testament can best be understood as a series of punishments and threats for ‘falling away’ from the true god. Eventually the Jews distilled their idea of God as ‘him’ being the only God, a surprise considering the amount of gods that were getting about at the time, indeed at one point the Jewish god Yahweh had a wife! The Romans certainly had no trouble in incorporating a Jewish god into their pantheon, they had plenty and had room for one more. After inventing an all powerful god, essentially in a contest with rival God Baal, (remember the First Commandment) the Jews settled on their idea of an invincible sky wizard, and eventually a schism saw the Christians insisting on attaching an earthly son. The esoteric Jewish sects, like the Essenes, were concerned with ‘higher’ things, and regarded all flesh as corrupt, and all earthly things as decaying. The Gnostic traditions of Christianity, successfully crushed by the dominant ideology of ‘Roman’ Catholicism, were essentially ‘eastern’ in content, emphasising an ‘inner’ light, and a pure dimension of human transcendent experience. The ‘literalists’ triumphed, and the orthodoxy of a particularly unsophisticated understanding of the ‘god-man’ myth became the dominant theology.

Scorsese, probably inadvertently, points up the gaps in the story, particularly in relation to the Saul character. Any cursory reading of the Gospels according to Paul, or any of the Pauline texts (most of which were not authored by any one person) indicates how little they knew of the wider Jesus story. In Paul there are no miracles, no virgin birth, no Magi, no slaughter of the innocents, no John the Baptist, no Nazareth, no Joseph and Mary, no Jerusalem, no Pilate, no trial, just a crucifixion and a resurrection.  And all this from a guy who claimed to have hung out with Jesus’ crew, the apostles?   Of course, Paul, like Jesus, and Peter, fails the historian’s test of having actually existed, that of two contemporaneous mentions in writing. Paul’s ‘writings’ were unheard of until well into the late 2nd Century. Scorsese’s Saul (Harry Dean Stanton) meets Jesus in the dream sequence and essentially admits an actual figure is not necessary for his religion to prosper, he doesn’t need Jesus at all, just the idea of him.

In the 25 years or so since this film was made, and in the 60 plus years since the novel, a lot of independent research has shown major difficulties in accepting what once was, indeed, gospel. Archaeology has completely debunked many supposed historic biblical ‘truths’, including the Exodus and a world wide flood. The laws of physics preclude an Ark capable of holding two of every species, and the Abraham story has been shown it could not have taken place at the alleged time because of the dating of the domestication of camels! There could have been no temples as described for Solomon, and David did not lead great armies. The research on the Dead Sea Scrolls indicates that the substance of the Beatitudes, the homily attributed to ‘The Master’, containing the ‘Blessed are the meek’ lines et al, pre-dates the Jesus story by over a hundred years. Nazareth has been shown to be a goat track at the time of Jesus’ childhood, a burial ground at best for a neighbouring village, so therefore this ‘messiah’ figure didn’t come from there. He may have been a Nazarene, which was an adherent to a sect, not a person from Nazareth, and the subsequent fabricators got their ‘facts’ mixed up. The Catholic Church clinging to the ‘golden paragraph’ in the historian Josephus’ writings, some 30 years after the ‘events’ has been admitted to be fraudulent by most independent historians. The paragraph is almost certainly a 4th Century interpolation by an early church father, probably Eusebius, eager to give doubters evidence that his boy actually existed. ‘Jesus’ may have existed as a man, but it’s also likely that the figure is a composite of many types that were common around the area at the time of Roman occupation.

Scorsese also touches upon the political, via the struggle for independence from Rome. Judea at the time of Christ was a nation divided, some Jews did well under Roman rule, others not so. The battle between the Sadducees and Pharisees was one of collaborationists versus freedom fighters. Pilate, who was an actual historical figure, ruled with an iron fist, and would certainly not have hesitated to put one more Jewish rabble rouser to death. Indeed Flavius Josephus, whose father was a Rabbi in Jerusalem at the time of Jesus, makes no mention of the ‘trial’ or the scandal of the ‘messiah’. The Judas of this piece is a more believable type than any previously presented, even if Kietel struggles with the tone of the piece.

Scorsese delivers a well acted, great looking variant on the myth, but eventually it’s unambiguous in it’s support of the idea of Jesus as god. The idea of investigating the humanity of this figure, allegedly both human and ‘divine’ may be controversial for some, but in Scorsese’s hands it’s tastefully and convincingly expressed. Ultimately the ‘dream’ mechanism, gives him an ‘out’, and his showing of the miracle of Jesus healing an ear in a literal fashion, seems to indicate that Scorsese lines up with the traditionalists in asserting Jesus was divine and capable of inverting natural phenomena at will. One wonders what the right wingers had to be angry about?  The faith of Catholic Scorsese, Orthodox Kazantzakis and Calvinist Schrader seems particularly undisturbed.

If Jesus existed or did not, it also doesn’t matter when considering the idea’s central to the film. Women of the early church were a disenfranchised group, and continue to be, given the victory of the literalists, who believed the literal interpretation of ‘son of god’. The Gnostic take, or deeper level of understanding, would have been that all men are ‘sons of god’, even women. The early GnosticChurch even had women or children serve as priests, or celebrants of mass. The literalists hated the Gnostics even more than the non-believer, and they made sure that their traditions were smashed, their followers killed, and Gnostic idea’s were forced underground as heretical for centuries. ‘Jesus’ may have preached love and tolerance; his followers had other ideas. The Jesus presented here is even handed in his approach to women, and the idea that Jesus had a wife and kids should be an obvious and uncontroversial one, but given the tenor of the churches teachings in the interim, it’s hardly an idea they’d welcome.

The film looks gorgeous, and the soundtrack by British musical genius Peter Gabriel is superb. Dafoe does a capable job in a difficult role, and Kietel tries hard bit seems a bad fit for the revolutionary Judas.  Harry Dean Stanton at least doesn’t grate like John Wayne at the cross, and does a great job as the zealot Saul.  As a contribution to the debate about god, to faith versus reason, the film is less successful. Mankind is fated to ponder the big questions, it’s part of our psychological make up, and good information or insightful perspectives are always welcome, but Scorsese’s film seems like the half baked apology of people who can’t quite swallow the stupidity of the old orthodoxies, but still can’t shed their inbred superstitions. Life is beautiful and life is meaningful. No god required. 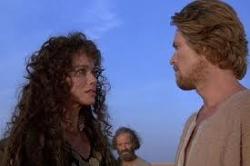 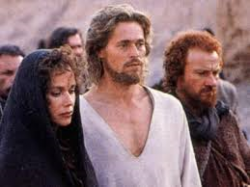 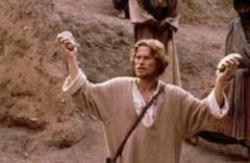