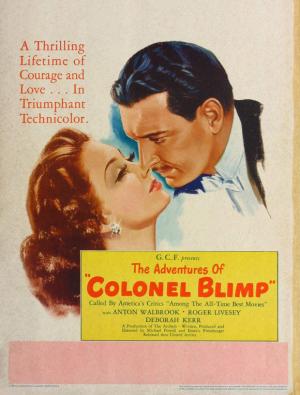 The Life and Death of Colonel Blimp

Michael Powell and Emeric Pressburger, much to Winston Churchill's disgust, produced a hymn to friendship in 1942 between two people, one an Englishman and the other a German. London was suffering through the blitz and blackouts when these two contrarians bucked War Office advice to not proceed, and were even denied their leading man being released from active service in Laurence Olivier. They cast Roger Livesey as the substitute lead, managed to get Anton Walbrook as the German (fro whom the part was written) and Wendy Hiller as the female lead who appears in 3 roles across 3 era's. Hiller pulled out after becoming pregnant and Powell then cast a young Scottish actress in Deborah Kerr, and proceeded to fall in love with her. 'Blimp' is probably The Archers most 'English' film, and that's saying something, it's delights may escape those unfamiliar with some particularly English foibles, but for those able to see that it's as much a valentine as it is a satire to a singular group of humans, and made for them with love and affection during their darkest hour. The Archers took as their start point the character of Blimp, a serialised cartoon buffoon by David Low, they then fleshed out the old soldiers history via 3 significant conflicts, the Boer War, the Great War and the then current conflict with Germany.

Powell opens the film with a blast of modernity, swinging 40's music and roaring bikes are blowing out the cobwebs as young soldiers plan to fight dirty in an exercise against Clive Wynn-Candy's (Roger Livesey) Home Guard. The exercise is supposed to begin at midnight, but they plan a surprise action on the Colonel's private club where they'll take him prisoner. They find the old man in the baths, naked and flabby, a fat joke and one the young man mocks as Candy is outraged 'War starts at midnight', and ends up fighting with the young officer as they both fall into a pool at the club. In one of many fine segues Powell has the young Candy emerge from the same pool 40 years earlier and we find a young strapping VC winner fresh from the Boer War. Candy is informed via a letter that a German he knew in Sth Africa is spreading vile propaganda about the English in Berlin and wants to go and confront him. Pressburger slyly uses exactly the same accusations that were currently leveled at the Germans, killing women and children, running concentration camps, et al, a subtle reminder that demonisation of a people is a common and re-occurring practice, and no-one is immune. Clive ends up falling in love with Edith (Deborah Kerr) the young Englishwoman who lured him to Berlin, and fights a duel with a nominated representative of the German regiment he offended Theo (Anton Walbrook).

Both men are injured in the duel and recover in the same hospital, becoming life-long friends, and it's Theo who wins over Edith with action while Clive had kept his feelings to himself. One of P&P's themes is thus revealed, the need for action over silence or hurt will be unavoidable, and visually Powell cleverly represents this 'covering up' of wounds with Clive growing a moustache over the duel wound on his top lip.

Powell fills the gap for Clive between wars economically by having his wall filled with hunting trophies from various yearly expeditions, a bold and witty fusillade of dead creatures. We arrive at The Great War via his latest trophy, a German soldier's helmet with the plaque 'Hun - Flanders, 1918' telling us we're near the end of that brutal conflict. Clive is with his loyal driver, Murdoch (Powell regular John Laurie) as news arrives of the armistice, Clive launches into a speech about 'clean fighting', and that although the 'Hun' used dirty tactics like mustard gas, and sinking civilian ships, 'right is might' in his world as the vile opponents were bested by 'gentleman' in a 'sporting' way. Clive encounters Barbara (Deborah Kerr), a nurse who bears a striking resemblance to Edith, and after the war he finds her and marries her. Upon taking her to their home he declares he will love her until the site is a 'lake' and that he will never change. He also discovers his friend Theo is still in an internment camp in England and goes to visit him, only to be re-buffed by a proud, embarrassed and defeated enemy combatant. Theo calls Clive to apologise before departing and Clive has him over to dinner with the scions of the British establishment present. In a pivotal scene Theo worries about the future of his country as all the Brits assure him they will help re-build Germany. 'We can't ask you to be our friends if we rob you', says Clive, a statement that carried bitter irony in 1943 as the onerous war reparations made upon Germany by the post-war Treaty of Versailles helped create the conditions for the rise of National Socialism and the ascent to power of Hitler and the Nazis. Theo returns to Germany convinced this 'weakness' in the British character will be their un-doing.

Powell again creates a delicate and touching montage to fill the gap between the World Wars, with Clive and Barbara seeing the world via Clive's postings, but the photo album is empty after the early '30's, and we see Barbara's death notice in The Times. Returning to the time frame that opened the film we see Theo attempting to avoid incarceration as an enemy alien in the new war, he emigrated to England after Edith's death in 1933 and lost his two son's to the Nazi Party, 'Heil Hitler' he says softly and ironically. Clive comes to the rescue of his old friend and Theo is amused to find his driver, Angela (Deborah Kerr) has been hand-picked by Clive from over 700 women, she is of course the image of Edith and Barbara,  'from Angel' Theo remarks, invoking the ghosts of the dead women. Theo is further surprised to find that Clive had never gotten over his undeclared love for Edith, finding previously unknown reservoirs of depth in this outwardly stuffy Englishman. Clive falls afoul of current politics by planning to give a pivotal speech on the BBC about the Dunkirk withdrawal, but his sentiment of 'I'd rather lose sportingly than win by adopting the enemies under-handed tactics' is out of touch and the broadcast is called off, and he's removed from active service. Angela and Theo encourage him to get involved in the Home Guard, and he takes to the task with fresh vigour. After the debacle of the 'excercise' where he's outflanked by 'modern' tactics, Theo advises him to adapt against Nazism or perish. In the final scene Clive looks over his bombed out house, now a water reservoir, or 'lake' and says wistfully to himself 'here is the lake and I still haven't changed'. It's a beautiful and poetic moment in a remarkable and heartfelt film.

P&P are on the side of change, and simply use the satirical British Colonel as the mechanism from which to deliver this sermon. Ultimately Clive determines to do the one thing he should have done as a young man, to accept the invitation to dinner of an older Officer who'd given him a bollocking after the Berlin incident, but now wanted to pass on some wisdom. Clive recognised that he would have benefited from that experience and he determines that the young officer who got the better of him will have to dine with him, so he can pass on his legacy. This in fact was the seed idea of the entire film and was given to Powell by David Lean, who when editing such a scene from an earlier P&P film, said the premise deserved it's own full feature. Once the questions of 'what was he like as a young man'? how did he get that moustache'? were in place, the Archers set about to find the cinematic answers.

The Army for Clive was his family, as he never had children, so he needs to share his life lessons for the next generation to build on, this is his accommodation to Theo's exhortation to 'adapt or die', to never stop learning, Clive claims to himself that he 'hasn't changed' but in fact he has, his instincts are for honour and respect, but when pushed, the rulebook needs to be set aside. In Roger Livesey P&P found their ideal Blimp, and it's hard to imagine what Olivier's overwhelming charisma would have done to such a precisely balanced part. Livesey was a skilled and interesting actor who went on to great success with the Archers, but would seem sadly under used by the wider industry. Pressburger made a particular point of separating Germans from Nazis, allowing us to see the humanity in Theo, a man who learnt his nuanced wisdom from life the hard way, and we understand the deep connection he has with the blustering Brit. Walbrook is brilliantly effective in these delicate scenes. Earlier when Theo was asked why it had taken him 8 months to see through Hitler he merely replied it took Britain 5 years. Indeed the Yanks sat out the first two years against the Nazi's causing many film-makers to make cinematic plea's for American Isolationism to end, foremost amongst them The Archers and Alfred Hitchcock.

A technically gorgeous film, the art direction, camerawork, and perfomances are all second to none as Powell always found the best talent Britain and the continent had to offer. Powell used colour brilliantly in his first full feature with it that he set the standards for it's use, reaching another level during the next decade and culminating in the masterful The Red Shoes. Churchill was offended by the idea of the Blimp film without ever seeing it, probably seeing in Blimp something of his own rotund self, given he was in the Boer War, proved a disastrous Admiralty head with the botched Dardanelles (see Peter Weir's wonderful Gallipoli) campaign in WW1, and was currently fighting a lone action against the might of Hitler, he had the film banned from overseas distribution.  The Life and Death of Colonel Blimp remains a fantastic record of a particular type of Englishman, a paean to the stiff upper lip, even one with a dueling scar covered with a Walrus moustache. 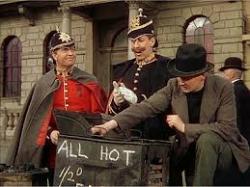 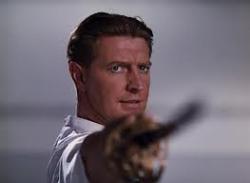 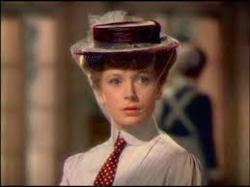 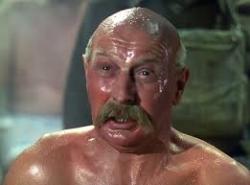 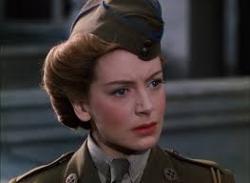 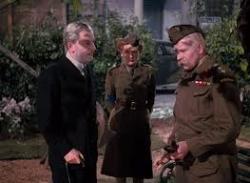 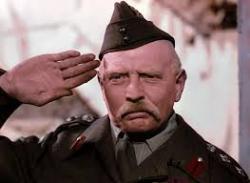