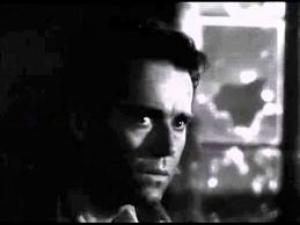 Henry Fonda returned from WWII and spent 6 months in his “kite building phase” with his best friend Jimmy Stewart, the pair socialising with their wives and spending evenings playing their records and relaxing after both having served their country in the armed forces. Fonda made his comeback in films with his old friend John Ford in the immortal My Darling Clementine, and for his next project he went back to RKO for a re-make of a French poetic realist masterpiece by Marcel Carné. Anatole Litvak directed The Long Night, and co-produced with the Hakim brothers, all refugees from Europe who fled the Nazi’s for Hollywood, the brothers having produced such French classics as Pépé le Moko and La Bête Humaine, as well as Carné’s original Le Jour Se lève, or Daybreak.

A man stumbles out of a 4th floor apartment, shot in the guts, falls down the stairs and dies. Joe Adams (Henry Fonda) is holed up in the room by police, under siege and reflecting on the events that led to this standoff, which unfold as a series of flashbacks. Joe is in love with Joanne, (Barbara Bel Geddes) but finds she is keeping a secretive relationship with a showbiz sleaze called Maximilion (Vincent Price), and the dawning realisation of the depths of that liaison tortures the war veteran. He finds solace in the company of Charlene (Ann Dvorak), who accepts her unrequited love for Joe, while he attempts to sort things out with Joanne.

Anatole Litvak was a Russian born director, who had made films in Russia before moving to Germany and working at the state run UFA. The Jewish Litvak fled after the Nazi’s came to power and made films in Britain and France before arriving in Hollywood in the late ‘30’s.  Litvak bedded down at Warners and actually made the first big studio, anti-Nazi feature in 1938, Confessions of a Nazi Spy with Edward G Robinson. Film Noir was defined and perfected by the many ex European directors who worked in Hollywood during the 40’s, and the influence of both German Expressionism and French Poetic Realism is unmistakable. In many ways it was a natural palette choice for these men, as Lang, Wilder, Tourner, Preminger et al, pushed American film into darker and more psychologically complex territory.

The Long Night was a perfect vehicle for distilling all these noir elements, and in Fonda, Litvak found a capable and adventurous lead. Fonda had nothing of the brutish masculinity of Jean Gabin, but was able to convey the tortured dilemma of the returned soldier. “Lots of vets go crazy” is the pithy summation of a cop at the start of the siege, and the major accommodation to the post war setting is the implication of Joe’s ‘shell shock’ or what we now understand as Post Traumatic Stress Syndrome. In the French original it was acceptable to kill for love, but here there needs to be another dimension to explain Joe’s actions. “Everybody kills a little, quiet like”, says Joe, who thought he was “all through with killing” after the war ended. In a nod to another poetic realist piece, Renoir’s Le Crime De Monsieur Lange, the crowd pass their judgement on Joe, in defiance of the law, to show him collective support in his hour of need.

Henry Fonda was something of a misfit in the Hollywood studio system, a stage actor who longed for meaty parts and hated the programme filler he got lumbered with while waiting for the great roles. An impatient and angry man, he railed against the bosses who refused to take chances on quality projects to the extent he wanted, but his commitment was undeniable, he even signed a 7 year contract with Zanuck at Fox to secure the role of his career, Tom Joad in The Grapes of Wrath, knowing he’d be making a pile of filler during that time. The new independence in the industry post WWII suited Fonda, and he followed The Long Night with another ‘arty’ Ford project, The Fugitive, but his world was thrown into turmoil by the suicide of his wife soon after and he retreated into theatre and stage work, barely making a feature for the next 6 years. Fonda’s thoughtful and sensitive presence presaged a new Hollywood man, one that would be dominant in the 1950’s, a far cry from the mainstream macho characters so prevalent in the 1930’s.

Stylistically, Litvak hits all the marks, the film is a superbly shot, atmospheric noir classic, and Fonda is first rate. Barbara Bel Geddes is fine as Joanne, and the peculiar sexual tension between her and Max adds to the perverse undercurrent that disturbs and prods Joe into action. Ann Dvorak is almost a carbon copy of Arletty’s ballsy showgirl original, and does a great job of providing Joe a sympathetic ear. The set replicates the French original, and if the piece lacks the philosophical depth and poetic fatalism of Carnéand Jacque Prevert’s masterwork, it is a fine approximation and a decent remake. In a disturbing aside RKO supposedly tried to buy up all the prints of Le Jour Se lève  to have it destroyed in order to make their film the only version extant, and given the propensity for hubris and stupidity in Hollywood, it’s sadly not hard to believe.  Thankfully they failed and we have two fine films to treasure. 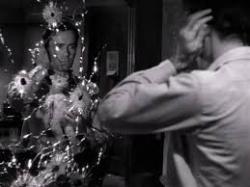 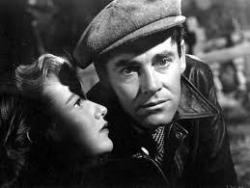 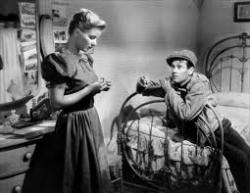 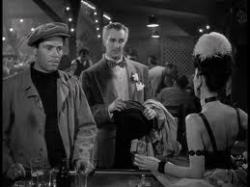