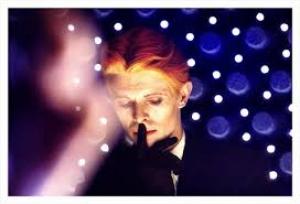 The Man Who Fell To Earth

Stranger in a stranger land

Nic Roeg’s mysterious and masterful Sci-fi, The Man Who Fell To Earth is a visual tone poem, a film that eschews logic in favour of ambiguity and existential mystery, and one that continues to confound and baffle in equal measure. Roeg was coming off mainstream, critical acclaim and solid box-office with his dark thriller, Don’t Look Now, and turned to the biggest rock star of the time, David Bowie, to take the lead in what would be his first feature film. Bowie provided the film with a characterisation that hit the exact pitch required to create one of the cinema’s most memorable aliens, albeit one who got caught up in some of the more banal practices of humankind.

Thomas Jerome Newton (David Bowie) comes to earth to find water to send back to his dying planet and dying family. He uses his superior intelligence to form a global company and make a fortune through patents. Newton meets and falls in love with a girl, Mary Lou (Candy Clark), who introduces him to many strange earthling ways, but compromises him and his ambitions. One of his company technicians, Dr Bryce (Rip Torn), senses Newton is different and betrays him to the military who prevent him from returning to his home planet.

Roeg used the harsh terrain of the Australian Outback to disorient his young protagonists in his 1970 classic Walkabout, and here he uses the harsh terrain of American urban life in the 1970’s to have the same disorienting effect on Newton. The alien is as equally out of place when attempting to come to terms with religion, sex and guns as the British schoolchildren were in dealing with the desert and the Aboriginal Dreamtime. The quiet conceit of the satirical dimension of the piece is all but given away by the character’s name, Newton, who ‘fell’ to earth just like an apple and may as well have landed in the Outback for the collision he endures in dealing with the consequences of his visit to our planet.

David Bowie was at a crossroads in his career when he accepted Roeg’s offer to star in The Man Who Fell To Earth, almost killed from his self-destructive life in LA, where he’d lived for a couple of years. For several years in the 1960’s he’d attempted to become a music star, first as a soulful R&B singer David Jones, then as an Anthony Newly type cabaret crooner, then as a wild haired, wide eyed hippie. None of these personas took off to any degree, but once he adopted the ‘star-child’ persona of his Space Oddity character in 1969 his career exploded. He rode the rollercoaster for a couple of years, fading away again before he embraced the alien rock star character of Ziggy Stardust and hit big with Starman, a song that again underlined an ‘alien’ perspective. By now Bowie was one of the biggest names in entertainment and indulged in many of the excesses that being a 1970’s Rock God brought with it. By the time of the film Bowie had morphed again from the post-apocalyptic character on Diamond Dogs (his take on Orwell’s 1984 after he attempted to secure the rights and failed) to the ‘plastic soul’ hipster of Young Americans, both fuelled by the consumption of heroic quantities of cocaine. It was in this paranoid and damaged frame of mind that Bowie started the shoot, and his fragile physicality and emotional reticence gave his character an almost imperceptible authority.

Roeg had riffed on the ‘imprisoned’ rock star before, in Performance in 1969 with Mick Jagger, and he was proving to have something of a penchant for casting famous musicians in lead roles, Bowie here and Art Garfunkel in Bad Timing a few years later. The idea of a character ‘imprisoned’ by his lifestyle, cut off from the ‘real’ world and disappearing into a realm of self-indulgence is the link that binds Newton and celebrity rock stars like Bowie. Roeg’s use of anachronistic 1950’s love songs like True  Love, or A Fool Such as I, or the sickly sentimental Try To Remember, on the soundtrack also adds a layer of ‘strange’ that predates David Lynch’s Surreal Suburbia shtick by at least a decade. Newton’s life is not only held hostage by the military, but also by the ordinary vices he falls prey too, television, alcohol, addiction, and he is unable to drag himself out of his torpor to achieve his ambition. Roeg distils the dilemma to the smallest most banal events as contrast to the idealised potential that we might hold for ‘intelligent life’, hoping that science will save us where our base instincts cannot, therein lies the struggle.

Roeg’s body of work is defined by several themes, one of which is the internal conflict of his protagonists. Newton retreats into himself, aided by a culture driven by excessive consumption and numbing narcosis. The clash of the personal and the collective is a less intrusive meme, but in The Man Who Fell To Earth, as well as in Insignificance, the wider political climate needs to be taken into account. By 1976 the Nixon era conservative backlash to the counter-culture had reasserted the primacy of the military-industrial complex, the brief flowering of hippie-dom and letting your freak flag fly had faded and Bowie’s freaky alien fitted right in to an America still fractured from the fallout of the culture wars and coming to terms with its changing identity. The war protesters had dislodged Nixon, (or more correctly his own hubris had) but Reagan and the neo-cons were just around the corner, and uber-capitalists like Newton would be fire-proofing their assets and ensuring that trickle-down economics was a myth and not a fact.

Nic Roeg ditches easy exposition here, favouring obliqueness, a strategy that he would continually employ making it a signature trope in his work, and it creates an unsettling, difficult and much misunderstood masterwork. The Man Who Fell To Earth is a major meditation on what it means to be human, an existentialist mood piece, anchored by a brilliant central performance, the result of inspired casting and razor sharp direction, in fact Bowie would carry a variation of the character into his music career as The Thin White Duke. Rip Torn is marvellous, his usual reliable self, and Candy Clark is fine, but it's Bowie's show. In its own way The Man Who Fell To Earth is as definitive a Sci-fi movie as Kubrick's 2001 or Tarkovsky's Solaris, or Ridley Scott's Bladerunner, a visually stunning and rewarding journey to the inner reaches of the human condition, touching on greed, lust, betrayal and obsession on the way. 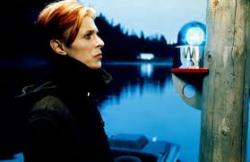 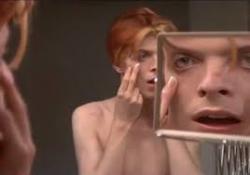 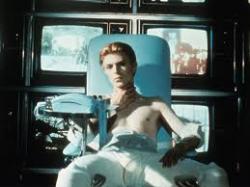