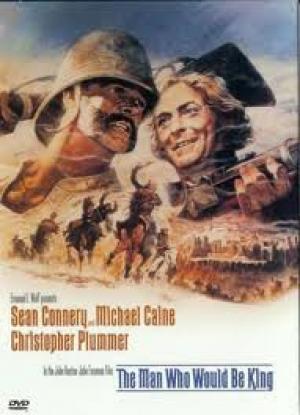 The Man Who Would Be King

John Huston owned the rights to the Rudyard Kipling story for over 20 years, and he'd planned to film it in the 1950's with Clark Gable and Humphrey Bogart in the leads. In many ways the film is a throwback to the great 'British Raj' adventure stories Hollywood pulled off in the 1930's, spurred by a sudden influx of British voices to bolster the advent of sound film the writers naturally looked for appropriate settings for the plumy tones and films such as Gunga Din and The Lives of The Bengal Lancers became common fare. Through that prism it's possible to see the Gable-Bogart version working, but by the time Huston actually made the film having two American film stars in the parts would have been unthinkable, and indeed Paul Newman eventually turned it down after he and Redford looked at it post The Sting, and furthermore he suggested to Huston that he cast Michael Caine and Sean Connery to play the parts. Huston set up mostly in Morocco for location shooting and re-created the Afghanistan region of Kafiristan where the story of the two British soldiers is set.

In bustling colonial India ex-soldier Peachy Carnahan (Michael Caine) robs a fellow Englishman of his watch. Upon realising the man is a Freemason like him, he is duty bound to return it and does so, striking up an acquaintance with the man, a correspondent for 'The Northern Star' newspaper, Rudyard Kipling (Christopher Plummer). Soon Kipling is drawn into the seedy world of the con man and his roguish partner Daniel Dravot (Sean Connery) and after helping them escape prosecution for a blackmail case he witnesses their 'contract', a document asserting their ambition to travel to remote Kafiristan and conquer the region to live as kings. Peachy and Danny set off with their cargo of rifles and ammunition to help conquer the Kafiristani savages and after many travails they finally come to the region and take to their work as mercenary advisors and trainers of fighting forces. Colonial imperialism treads heavily over the ground, as both men see it as their right to take whatever they can gouge out of the local population, a fair price for bringing 'enlightenment' to the uneducated heathens. Huston treats the subject with lightness and wit, but the underlying threat is always acknowledged, the 'progress' of bringing in greater firepower with which to slay the enemies who 'piss in the river upstream'.

The tribal people they encounter have enough enemies and grievances to keep Danny and Peachy in work for years, but their superior firepower sees them succeed spectacularly. A key set battle takes place, and Danny is shot with an arrow in his chest, the superstitious locals are convinced he's a god when he continues fighting, not realising a leather bandolier under his uniform stopped the arrow from penetrating his body. The new 'god' is summoned to the high temple   city of Sikandergul and here they come to believe he is the son of Alexander the Great, and the riches of the temple are given over to him. Peachy wants to take the spoils and return to the west to live as millionaires, but Danny takes on the responsibilities of the Solomon like role and refuses, Peachy is set to leave on the day of Danny's marriage to the beautiful Roxanne (Shakira Caine). Roxanne has been drugged by her family to calm her down, as locals believed that any girl who mates with a god will burn up instantly, and in her altered state she bites Danny, drawing blood and revealing him as a man not a god. The jig is up and Danny and peachy flee the angry mob.

Central to Huston's theme is a culture clash, and beyond that a battle of superstitions. Danny scoffs at the ignorant locals that were easily exploited by his shamanistic con man behaviour when he and Peachy were fleecing the villagers prior to heading to Kafiristan. He's also scathing of their customs of offering both daughters and sons for the sexual pleasure of guests, ignoring the fact that it's also Biblically sanctioned, and of the barbarity of using an enemies head for a polo ball. Both Danny and Peachy see this superstition as a thing to be exploited, but ironically once Danny is made king, he sees relevance in events that require an equal superstition. Peachy points out that each event is explicable by logic and reason, but Danny is now beyond logic and sees only destiny, the son of Alexander come to rule and claim what is rightfully his. Danny's delusion has devastating consequences, and his inability to see his own superstition, more damning as he has a clear and present voice pointing out the error where the villagers enjoy no such perspective, finally dawns on him when it's too late. Danny had the bandages removed from his eyes both literally and figuratively, but self awareness is a precious commodity.

The film is greatly enhanced by the magnificent and pitch perfect performances of Caine and Connery, the Butch and Sundance of British India. They inhabit the roles of the charming and roguish soldiers with ease and panache, and are good enough to make the central tragedy work, that of two men who are deep friends, losing that friendship, which in this case was worth more than all the gold in Kafiristan. Connery had an uneven career away from Bond, and apart from his work with Sidney Lumet this is his best role away from the iconic spy he made his own. Caine made many great films during the '60's and '70's, using his cockney twinkle to great effect but also able to play roles with grit, like his brilliant Jack Carter in the Brit Neo-noir Get Garter. In The Man Who Would Be King Huston affirms his deep love and understanding of Kipling and creates a vibrant and literate epic adventure, with plenty of wit and invention. The locations and the Moroccan extras give a depth and verisimilitude that fakes the British Raj era Huston needs to evoke to perfection. Huston had essayed the adventure film definitively in his classic The African Queen, and this rollicking epic is a very worthy successor both to it and to the golden age of Hollywood British Raj pieces that it was inspired by. 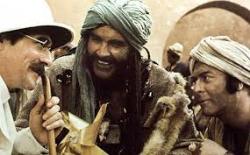 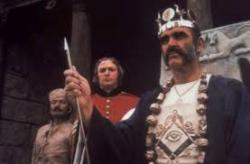 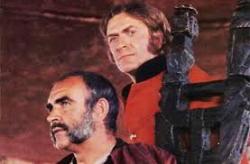 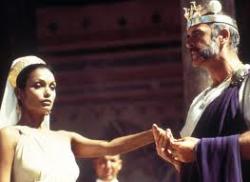