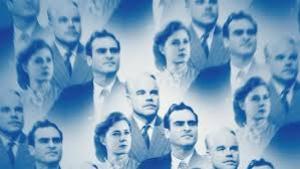 The major pity of Paul Thomas Anderson’s ‘The Master’ is the fuss made over the supposed thinly veiled ‘Scientology’ schematic at it’s heart, effectively obscured the fact that Anderson had made another wonderful and enervating film. Anderson pushed his talented cast, particularly the twin pronged attack of Philip Seymour Hoffman and Joaquin Phoenix, into areas of discomfort, and uncovered a pulsating truth that lies beneath the cultural and intellectual divide of the protagonists. ‘The Master’, like Anderson’s previous masterpiece ‘There Will Be Blood’, features another unforgettable central character, Lancaster Dodd, a driven and flawed man, who founds a ‘religion’ in the aftermath of WWII, and battles elements within and without it in order to maintain the faith.

Freddie (Joaquin Phoenix) is a WWII veteran struggling with civilian life in the immediate post war years. He takes a job as a store photographer, but failed relationships and chronic alcoholism soon sees him on the move. Freddie stows away aboard a yacht chartered by Lancaster Dodd (Philip Seymour Hoffman) and soon becomes entwined in the machinations of ‘The Cause’, Dodd’s quasi-religious movement centred on his life teachings. Dodd takes a shine to Freddie, particularly to his potent homebrew moonshine liquor, and the two men form a de-facto father-son relationship. Freddie joins The Cause, but his disruptive temper and continuing problems with alcohol make the journey a fractious and uneven one.

Anderson taps into familiar emotional territory, the baggage of our past and it’s relevance as to how it shapes our present. “You may be through with the past, but the past is not through with you”? is how he articulated it in his previous epic ‘Magnolia’, and similarly to that film, a father-son relationship lies at the centre of ‘The Master’. Anderson explores a couple of lines of inquiry, one being the ability to attain a level of self awareness, and the other concomitant aspect, how a lack of self awareness can be exploited by others. Dodd professes a quasi-scientific analytical tool, called ‘processing’, which via a pseudo psychological approach unearths emotions and behaviour that he blames on our negative emotions. Freddie is a badly damaged individual, adrift in a sea of pain, akin to a drowning man clutching at any lifeline, and he embraces Dodd as his saviour and friend. Dodd believes he has a system to help people deal with the baggage of the past, and in Freddie he sees an ideal subject. The two enter a bizarro, symbiotic co-dependent relationship.

Anderson obviously took inspiration from the life of arch charlatan L. Ron Hubbard, the man who started Scientology around the same period the film is set. Hubbard identified the insecurities extant in the world post the calamitous world war against fascism, and ironically established a model for an emotional fascism to exploit them. The salacious aspect to the Scientologist connection was fanned by Anderson’s relationship with uber-Scientologist Tom Cruise. Cruise starred for Anderson in ‘Magnolia’ and turned in a career best performance, pushing himself into edgy territory at the directors behest. Rumour had it that Cruise was given a private showing prior to public release, and gave the film his blessing, and in truth the focus of the film is not in directly criticising the ‘religion’, possibly to the disappointment of many.

Anderson’s core concerns are far more subtle than to take the easy way out and debunk the nonsense that is Scientology, the equivalent of shooting fish in a barrel. Anderson digs deeper and asks why do we need to follow any guru like so many sheep? Dodd’s parting words to Freddie are “If you figure out how to live without serving a master, any master, let me know”. Dodd’s processing is obviously akin to ‘auditing’, the junk psychology at the heart of Scientology, and the telling line from Dodd’s son, “He’s making all this up as he goes along” is all the criticism you need.

The heart of the piece is the interplay between the ‘father’ and ‘son’, obviously taking on a Christian dimension in the dissection of that dynamic. As a disciple, Freddie is a loose cannon at best, as he struggles to come to terms with his masters plans. Dodd becomes more unstable as his ideas come under pressure, especially when he re-thinks a crucial aspect of his teaching, deciding people should ‘imagine’ their past, rather than ‘recall’ it. Freddie returns to his past to confront it, and in doing so finds the mechanism to move away from his dependency on Dodd. Freddie inadvertently provides the answer to Dodd’s question, in that by knowing himself, he becomes less susceptible to charlatans selling ‘spiritual’ snake oil.

‘Amy Adams adds a superb turn as Dodd’s younger wife to her growing and impressive list of characterisations, filling in a critical link between the older and younger man. Hoffman gives a measured and sustained effort in realising the breadth of Dodd, managing to convey the fine line between delusion and madness, and anchoring the film so that it works at every level. Joaquin Phoenix is pitch perfect as Freddie, and his seeming natural predisposition to a degree of instability chimed beautifully with the demands of the role. Anderson matched the performer to the role in the same way he did with Cruise playing an unattractive, self-centred prick in ‘Magnolia’.

Spiritualism and it's attendant chicanery has been and remains to be a source of exploitation and vulnerability for a large slice of the human population. The ability to convince other people that one has some control over the 'realm of the invisible' is as old as mankind itself, and many of the shamans of yesteryear are to be found in the self-help movement of the 20th century, many of them a very thin line away from 'religion' itself. The maxim, 'there's a sucker born every minute' is never far from the surface of this piece, and Anderson merely lays out his story while the overtones and resonances speak for themselves.

‘The Master’ is a fine and thoughtful film, considered and serious, and beautifully written. Anderson again demonstrates his ability to hold many elements in balance, the oblique music, the subtle visual threads and the nuanced performances. The joy of it is it’s trust in the viewer to engage and discern, rather than to go for the cheap shot and the obvious, not something you generally associate with a Hollywood film. Anderson may just be the finest filmmaker of his generation. 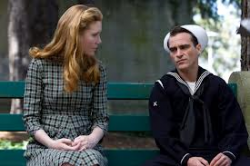 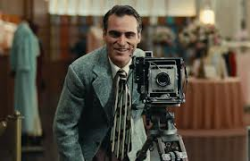 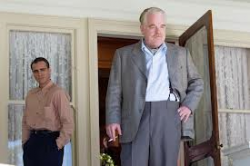 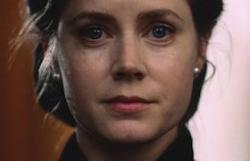