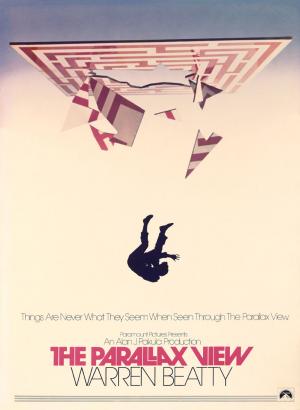 The Parallax View is the product of collective disquiet and could not have been made before the 1970’s. It’s from an American generation that had grown uneasy and had learnt to question official versions of events and to even ask if it’s own administration had the best interests of the country at heart, unthinkable until only a few years before and the counter cultural struggles of the 1960’s. It could also not have been made by an America that wasn’t sure it hadn’t been lied to by the Warren Commission, the report into the Kennedy assassination, and shaken by the consecutive shocks of Martin Luther King and Bobby Kennedy. The resultant lurch to the political right eventually reaped the whirlwind of Watergate with the Parallax source novel published in 1970 and the film coming in the gap between the Ohio University shootings, defeat in Vietnam and Nixon’s disgrace, an incredibly fertile political period in America. Alan Pakula, formerly a producer at Paramount with the notable socially conscious ‘To Kill A Mockingbird’ et al, was coming off his first great success as a director, Klute (with Jane Fonda) and Warren Beatty lent his star power and liberal credentials to the project began in late 1973.

Pakula opens with a shot of an ancient Indian totem pole against the towering Seattle Space Needle, a subltle nod to perspective given the title of the film. Senator Carroll, a Presidential candidate is there for an Independence Day function and is assassinated in plain sight by a waiter at the event on top of the spire, who then tumbles off after a struggle with police. The Commission into the murder rules he was killed by a lone gunman, even though Pakula shows us a second gunman. We cut to 3 years later, Joe Frady (Beatty) is a small time journalist with visions of the big break, his anti-social tendencies and ‘creative irresponsibility’ see his benign editor Bill (Hume Cronyn) constantly bailing him out of trouble and counselling him to stay off the booze. A news reporter Lee (Paula Prentiss) appears at Joe’s door, she’s distraught and certain she’s been targeted for death. It’s plain that in the intervening years Joe and Lee have had a relationship that dated from both of them being present the day of the shooting, and she’s concerned about the amount of deaths since of the people who were there, convinced there’s a conspiracy to eliminate any witnesses. Joe shrugs her off but when she is found dead he starts his own investigations. A lead to a small town sees him dodging an attempt on his own lie and turns up a reference to a shadowy organisation, The Parallax Corporation.

Bill starts to think Joe is onto something and offers qualified support, Joe is still not sure other than, ‘a natural tendency to cover up mistakes’ that there’s anything sinister in a conspiratorial sense. After another death on a yacht related to the shooting witnesses Joe infiltrates Parallax by faking their entrance test. Joe is taken to their ‘human engineering’ testing centre and is subjected to a remarkable 5 minute visual and audio montage that starts with mainstream, warm images of love, mother, father, home, country and eventually those images are perverted and debased in an ever more rapid visual spiral, blurring until the viewer is presented with images of poverty and desolation, while a solution is subliminally suggested as to the viewer becoming an ‘avenging angel’. Joe spots the second waiter/shooter from Seattle and manages to prevent another assassination on a plane in a tense and well paced sequence. Parallax sends him on his first job, but Joe fails to follow the script and ends up witnessing another killing, this time at a rehearsal for a political rally where Senator Hammond (Jim Davis) is dispatched on a golf cart with all the razzamatazz of the faux rally going on around him. Pakula uses some witty visual devices here, the cards and the school brass band providing an almost surreal counterpoint to the action. Joe is spotted by a brass player, ‘I see him’ he yells as Joe runs amongst the ceiling level lighting-rig platforms to his death, knowing that he’s been set up as the patsy for the shooting. The commission into the Hammond murder finds Joe acted alone.

Pakula frames the action somewhere between a Hitchcock ‘wrong man’ piece, with undoubted visual references to North By Northwest in the angular symmetry of the offices of Parallax and a cold war thriller full of murderous set pieces. The final murder is pure Hitchcock shot from above stuff, witty and effective, as is the use of iconic architectural structures. Pakula also employs a device that keeps the audience at arms length from the action at times, shooting conversations from a distance, occasionally obscuring the audio, so we’re always thinking there’s something going on beyond what we know. The seemingly obligatory post-Bullit car chase is inserted but overall the ‘message’ is couched in an entertainment rather than a lecture. Beatty gives a nice, edgy performance that avoids the tongue-in-cheek nature he often lapses into, and Hume Cronyn is wonderful as the newspaper editor. The idea that political assassination had become ‘as American as apple pie’ is the sardonic under-current that posits murder is not beyond being corporatised and is in fact just another commodity in a consumerist culture, to be traded as any other. The instruments of government are seen as impotent at best or complicit at worst in the face of these noir corporations and ordinary people are left with conspiracy theories aplenty to ponder, where it’s increasingly difficult to tell the academics from the fruit-loops, and isn’t that just what a Parallax view would enjoy?. 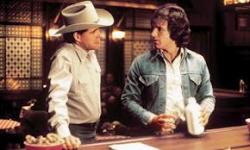 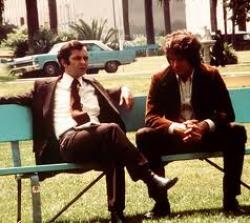