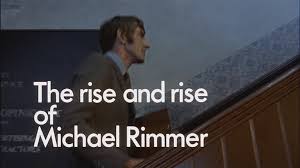 The Rise and Rise of Michael Rimmer

"He himself is a Rorschach blot onto whose vague and indeterminate shape other people project what they would like to exist: 'Cooky' the endearing invalid, Peter Cook the extraordinary satirical genius, Peter Cook the comic inventor and so on and so forth. He was all and none of these things. People would be less promiscuously inventive about who Peter was if there had been more of Peter's own actual personality present. What there were were these people who he created for himself to appear behind." ~ Jonathan Miller on Peter Cook

David Frost was intent on maximising the success of his television show, That Was The Week That Was, a phenomenon in the mid-sixties, and in 1967 he conceived of a political satire that would break him into film production. He used a couple of his regular writers, John Cleese and Graham Chapman to fashion a script and pitched it to Peter Cook to star in it, but funding was hard to find for almost two years. The movie went into production in 1969, just prior to a General Election in mid 1970, and a decision was made to hold back the release until after the election, thinking it might confuse the issue. Kevin Billington directed and with Cook helped with a re-write of the script, casting a wonderful ensemble of English character actors who set about skewering every political scared cow in sight.

Michael Rimmer (Peter Cook) arrives unannounced at a failing advertising agency, an expert in ‘coordination’ and proceeds to shake things up. He manipulates the owner (Dennis Price) into sacking the manager Ferret (Arthur Lowe) and starts to position the agency as a political force by introducing modern methods and cultivating influence. Rimmer sabotages his rival companies polling techniques, hires their best man Niss (Denholm Elliot) and ingratiates himself with the Conservative party until he agrees to stand as a conservative candidate himself in Budleigh Moor (a wry hello to Dudley Moore). Rimmer marries well and his political connections ensure his swift rise to prominence as he engineers an assassination and virtual coup.

In the aftermath of the calamitous Brexit debacle, seeing a satire that involves government by opinion poll made nearly 50 years prior is quite something. The team satirised many elements of 1960’s politics, corrupt and inept upper-class twits with power and even included a parody of the JFK assassination! The Poll business that Rimmer upends is a moribund microcosm of a timid and backward-looking Britain, culturally dominant via The Beatles and the Swinging Sixties phenomena, but increasingly irrelevant in a global political sense. Rimmer swans in unannounced and unwanted (and unauthorised) as a kind of early non-digital disrupter and uses the lack of accountability and general non-engagement of the staff to create fear and mistrust, the friends of every aspiring politician. Rimmer’s clear-eyed and cynical ambition is pitted against a hopelessly mismatched system, riven with class divisions, hypocrisy and ancient tribalism. Rimmer is inwardly unconcerned with the normal veneer of civility and politeness that runs British society and exploits this weakness while outwardly affecting its conventions.

“Our experiment in participatory democracy seems to have run into some difficulties” says Rimmer, as he manipulates the population to elect him President for life. An hilarious sequence has squads of bureaucrats delivering reams of proposed legislation to citizens who are then required to vote on every issue – “I think I was right to be tough on China”, says a weary husband to his wife after he’d trawled through a mountain of paperwork. Everyone is relieved when Rimmer proposes that he takes on this responsibility alone, their saviour and deliverance from irrelevance. Rimmer polls everything, sex (‘You’ve never had it so often’) and religion and even convinces an Archbishop (Graham Crowden) to be less didactic on the existence of God in order to increase Church attendance, the cleric agrees, “I see, a kind of our father who might be in heaven.”

Peter Cook was one of the great satirists and plays Rimmer with a deathly deadpan that anticipates Peter Sellar's Chance The Gardener in Hal Ashby's Being There by a decade. The approach was pilloried at the time but now looks like an appropriate choice to let a viewer imbue Rimmer with their own interpretations of the characters intentions. Cook later claimed he modelled Rimmer's mannerisms and modulated speech on David Frost, who 'rose without trace' in the real world in the same way the fictional Rimmer did.

The film is a condemnation of the ‘great man of history’ model of thinking, pointing out in a cartoonish way that many less than great men get through to positions of power based on nothing other than naked ambition. Western civilization is primed to accept the myth of a saviour, a single figure who can fix the ills of society, and Rimmer is just another messiah claimant with delusions of grandeur, a comic riposte to Nicol Williamson’s character in The Reckoning whose final line is “If I can get away with that, I can get away with anything.”

In a post Brexit, Donald Trump world, watching the inexorable rise of a sociopathic fascist and a manipulative cipher is rather chilling, even with the generous dollops of satire and exaggeration. 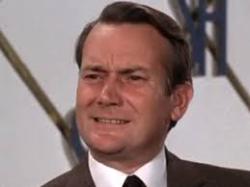