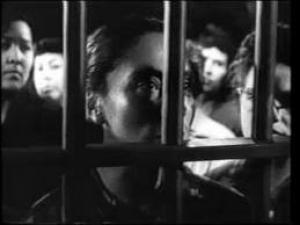 The Salt of the Earth

Herbert Biberman’s response to HUAC and the blacklist is, if not a great film, a remarkable document of an extraordinary time, and may represent the only true American neo-realist film ever produced. Biberman was gaoled as one of the so-called Hollywood Ten, and spent six months in prison for contempt of HUAC, his exercising of his right to freedom of speech under the First Amendment trammelled upon by a witch hunting committee. Upon his release he teamed up with fellow ‘blacklisted’ workers in writer Michael Wilson, actor Will Geer and producer Paul Jarrico, all of whom were unable to work within the entertainment industry. The team formed their own company and found funding from the unlikely source of the International Union of Mine, Mill and Smelter Workers.  The team decamped to New Mexico and, in firm neo-realist tradition employed many unprofessional actors to fill the roles in the story of a strike in a New Mexican mine in the 1950’s.

The story is based on an actual strike in the mining town of Hanover in 1950, and Michael Wilson interviewed the participants before writing the screenplay, many of whom ended up with roles in the film. Ramon (Juan Chacón) is a hard working Mexican American, and a union leader in the zinc mine, struggling to get equality for his workers, asking for the same conditions that the ‘Anglos’ have. “Anglo’s always work in pairs”, “Anglo’s have hot running water” in their company homes, the Mexicans do not. After an accident at the mine the Mexican workers call a strike, but the bosses call in the police, busting the picket line with a Taft-Hartley injunction. The miner’s wives are not prohibited from picketing however, and they convince the highly sceptical men to take their place on the line. The police arrest the women but they create such a fuss in the gaol that they are released, much to the relief of their husbands who suddenly have an appreciation of the amount of work the women do at home. The company responds by starting evictions, throwing the families out of the company homes, but the people rally and resist the strong arm tactics, forcing the police to back down.

Notwithstanding its antecedents the film is much more than a simplistic, ‘saintly’ worker versus evil bosses propaganda piece, as it unearths many aspects of inequality across ethnic, class and gender lines. The piece is a powerful feminist statement, and the heart of the film is Esperanza (Rosaura Revueltas) Ramon’s wife, who narrates the story, and who is radicalised during the conflict. Ramon dismisses his wife’s concerns about running water, until he himself has to do the housework after his wife is locked up. She scolds him, “You think you can have dignity while I have none?” when he prefers to focus on “equality on the job first”. The women seize the opportunity to participate in the struggle, giving rise to feelings of emasculation in their menfolk. Biberman wittily shows the men doing housework, conflicted by the “sexual equality” their wives are demanding. Esperanza defiantly pulls her own personal strike on Ramon, denying him her body, “Sleep where you please, but not with me”, a startling concept in an American film from the ‘50’s.

Racism is also confronted, as the union argues the worth of every human entitled to find dignity in work. The Mexicans are viewed as second class citizens in every regard, their casual exploitation making the situation even more depressing. When Ramon argues about the dangerous tasks they are expected to perform, the hard ass Anglo foreman barks, “You can’t handle the job I’ll find somebody who can”, “A scab”? replies Ramon, “An American” is the bloodless response. Discrimination is effectively sanctioned by the government, via the use of the draconian Labour Management Relations Act of 1947, the so called Taft-Hartley Act, which restricted the right of lowly workers to strike, enabling the bosses to engage the police to break the picket line. The act remains in force into the 21st century, used by Bush Jnr against the Longshoreman in 2002.

The union behind the film, the International Union of Mine, Mill and Smelter Workers was itself blacklisted, forced out of the Congress of Industrial Organisations, despite being a founder member in 1935. The HUAC hearings had tapped and exploited a wellspring of fear and paranoia in the American public in the late ‘40’s, and Hollywood embraced the opportunity to claw back some of the power it had lost to independent producers after the war. A formal agreement in 1947 between the studios, the Waldorf Statement, enshrined the intention of the employers to blacklist anyone they cared to, often on the flimsiest pretext, to claw back their position and power. The blacklist era remains one of the darkest stains on the American arts industry, never fully addressed in the nations psyche, and partially because America as a whole struggles with the idea of collectivism and broadly conflates socialism with communism. The misconceptions continue into the modern era, witnessed by the ludicrous notion that their president Barack Obama is a socialist.

The undisputed star of the film is Rosaura Revueltas, and her performance is simply beautiful, heartfelt and true. She suffered the ignominy of being deported on trumped up immigration charges, as the production came under pressure from all sides, including the FBI, and a double had to be used to complete the film. While the rest of the film lags at times because of the participation of amateurs, the honesty of Revueltas shines through and she exudes confidence and grace, elevating the role to one of the finest of the era. Esperanza stands up against the great traditions of pivotal female roles in Italian neo-realism, like Magnani in Rossellini’s Rome, Open City and Giovanna in Visconti’s Ossessione, no small feat given the difficulties of the production. Will Geer is suitably leery as the dubious cop, and Henrietta Williams stands out as a feisty and vocal protester.

Michael Wilson, an Academy Award winner a mere two years earlier, fled Hollywood and ended up working in Europe, as did many of his blacklisted comrades. In his youth, like many artistic Americans he had joined the Communist Party, disillusioned by capitalism after a World War and a Great Depression, but gravitated to the opportunities in California and eventually landed a writing job with Frank Capra’s Liberty Films. Capra disowned Wilson after suspicion fell on the famous director, who’d ironically made his reputation by championing the average working American via Robert Riskin’s warmly drawn characters. Wilson ended up having a degree of vindication by winning further accolades for his work on Lean’s Bridge on the River Kwai and Lawrence of Arabia,  despite being denied credit on both films at the time of their release. He was awarded a posthumous Oscar for Bridge on the RiverKwai in 1996.

The Salt of the Earth eloquently states that dignity is a human right and one worth struggling for, as Esperanza states in the end, “We had won something I could leave my children, and they, the salt of the earth could inherit it”. The concept that not everything can be measured by conspicuous consumption may have struggled to find a receptive audience in America in the ‘50’s, then in the throes of the largest consumer boom in human history, but the film was acknowledged in 1992 as culturally significant by the Library of Congress. 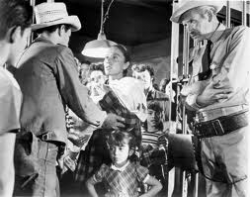 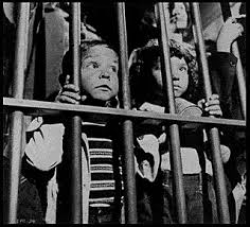 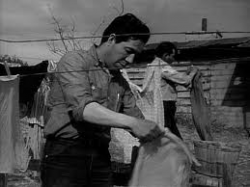 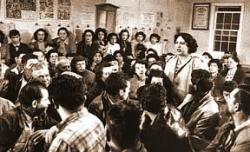 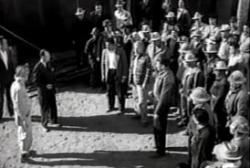