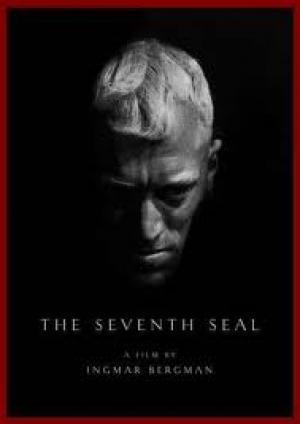 After more than a decade of making fine films in his home country, and with a solid background in theatre too, Ingmar Bergman made his international breakthrough in 1957 with the allegorical The Seventh Seal. Bergman's previous film from the year before, Smiles on a Summer Night had garnered some attention at Cannes, and this film consolidated his reputation in Europe and spread his name to America and beyond. The story had formed the basis of a theatre piece he'd written some years before, and the film has the compact intensity of a theatrical presentation, but with the filmic élan of Gunnar Fischer's cinematography. Bergman cast his regular collaborator Gunnar Björnstrand as Jöns, the Knight's squire, and in the first of what would become 11 films together, Max Von Sydow as the Knight, Antonius Block.

In the 14th Century, a Knight and his Squire return to Sweden from the crusades, and are resting on a remote beach. A chessboard is set up and the figure of Death (Bengt Ekerot) appears to harvest the soul of the Knight, Antonius Block (Max Von Sydow), who challenges Death to a game. It is a period of plague and the Knight sets off for his castle, continuing the game in instalments, buying time for a reprieve in doing so. The Knight and his Squire attract some wandering actors who share their journey, as well as a Blacksmith and his wife, and a young girl whom Jöns saved from a rape. Block gives away his tactics to Death inadvertently, mistaking him for a priest, and sees the fear loose in the land due to the plague. He distracts Death during the last part of the game, so that the acting couple and their baby can escape, but sacrifices himself in doing so. The group make it to Block's castle, where he's reunited with his wife, but Death (spoiler alert) finally catches up.

Block is a man undergoing a crisis of faith, coming home from a 'holy' war to a land ravaged by plague, a disease broadly thought to be punishment from an unhappy deity. "What's to become of those that want to believe but cannot?,"  he says to the priest, only to find it's Death in his place. Block wants evidence, he craves something he can touch and feel, like the strawberries and milk he shares with the actors. Block contrasts belief with love, a "memory he can touch", before his cynical Squire comments "Love is the blackest of all plagues". Block questions a girl, sentenced to burn as a witch, "I want to meet the Devil, to ask him about God" he tells her, she replies only that she sees 'emptiness'. Block is confronting an existential terror, and his sword is not enough to fight an invisible enemy.

Bergman ramps up the Biblical symbolism several notches by calling the actor couple Joseph and Mary, as they protect their young male baby from the ravages of the land. A parade of flagellants passes through the village, a pathetic attempt to appease an angry God with self-inflicted violence against the all-too-weak flesh. The battle is between the secular and the profane versus the corporeal and divine, with Death taking all comers. The young girl saved from rape by Jöns welcomes Death with an ecstasis bordering on sexual, embracing the thought of a 'better' life beyond this vale of tears no doubt, but Block is not so sure. The verse from Revelations that opens the film, also closes the piece where Block must take his exit, before Joseph and Mary have the last words. The verse speaks of 'silence in heaven', and after Block has a 'last supper' with his wife and friends, he faces the silence of the heavens for the final time. Mary says to Joseph, who sees the procession of souls doing their now famous 'dance of death', "you and your visions".

Bergman sets two distinctive interpretive voices amongst his searchers, the gruff and earthy Jöns, prone to a pragmatic view of events, and the dreamer Block, looking for the 'hidden' things, the meaning behind events. Jöns is no romantic, after saving the girl from rape he informs her he could rape her himself if he chose, but that he might need a housekeeper. He tells her that as he has been away at the crusades so long he hoped his wife was dead, which would obviously clear the way for him to expand her 'housekeeping' duties. Block is no utilitarian like Jöns, he notices small details in others lives and exhibits a broad humanity not found in his Squire. Block has seen the dark side of killing in the crusades and is now looking for evidence of a sublime dimension to life, a point of existence. The nearest he gets is to see it in the love the young couple have for their son, and ultimately that's what he resolves to protect from the ravages of Death.

Ingmar Bergman moved into his 'religious' phase with this film, and stayed there for quite some time as he examined what he understood to be the 'silence of God'. Bergman's childhood, dominated by his strict father, a church Pastor, meant that Bergman's relationship to religion in his fiercely Christian country was somewhat problematic, and that contributed to the depth of investigation he lent to his 'God' themed films. The Seventh Seal may not be Bergman's best film, but it is his most important and iconic, launching him to the forefront of significant world directors. It contains many of his key themes and concerns, ideas that would define him and his cinema in the next decade.

Bergman's theatrical background contributed to the strong positioning of the actors and the memorable framing and mise en scene. The cinematography is masterful, stark black and white and contains some of the most striking imagery in all of cinema. Bergman moved on to the masterful, Wild Strawberries, with his next film and duly won the Oscar for Best Foreign film, the first of three. He returned to medieval and religious themes with the confronting, astonishing The Virgin Spring and again won the award, before he made his so-called Silence of God trilogy, with the outstanding Winter Light the best amongst a very good crop. Personal, committed filmmaking doesn't get any better than the work of this Swedish genius. 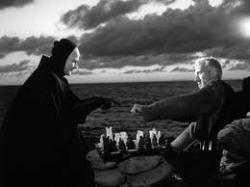 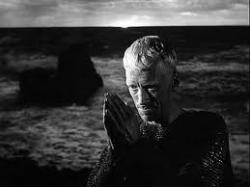 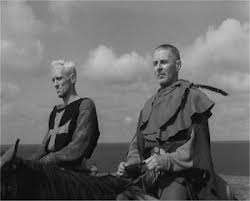 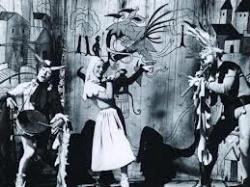 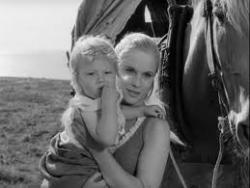 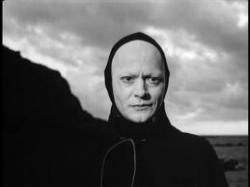