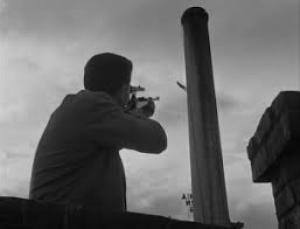 Twenty years prior to Don Siegal's fascist and reactionary Dirty Harry, where a vigilante cop takes justice into his own hands to rid San Francisco of a psycho killer, was Edward Dmytryk's liberal The Sniper, involving the same city and a similar problem, and just maybe the film was Siegal's High Noon  bete-noire and Dirty Harry is his response, his Rio Bravo?. The Sniper as it stands is a superb slab of realist noir, shot on location in San Francisco and shot full of energy, vitality and with a dark, beating pulse kept in tight focus by the crisp direction of the controversial blacklistee Edward Dmytryk. HUAC had effectively ended his career by having him found guilty of contempt of Congress and sentenced to a year in gaol as well as the other members of the 'Hollywood Ten'. Dmytryk recanted after prison, went before the committee as a 'friendly' witness and 'named names, including that of fellow director Jules Dassin, who was forced to go to Europe to find work.

An interesting note is the casting of rabid anti-communist Adolphe Menjou in the role of the police investigator here, as the film has a very liberal slant and is condemnatory of state run mental institution policies that allowed mentally ill people like the 'sniper' to slip through the cracks and pose a threat to society at large. The film was produced by Stanley Kramer, who's company had a long term contract with Columbia and had already scored a hit with the Fred Zinnemann directed High Noon, and showing a keen eye for talent by signing Marlon Brando to do The Men in 1950, and using him again for The Wild One in 1954. Kramer became known as a director of 'message' films, or at least one's with a social conscience, a tricky thing to make work at the best of times and a genre with which he had mixed success. Dmytryk shoots almost entirely on location, following the lead of other ground-breaking Noir's like Kazan's Panic In The Streets  (from the same writing source as his film) and Dassin's The Naked City, and it gives the film a direct vibrancy that can rarely be matched by studio bound affairs.

Eddie Miller has a pathological hatred of women that seems to trace back to bad treatment at the hands of his mother, and from an apartment window he points his rifle at a woman across the street and pulls the trigger. The gun is not loaded and it's clear he's trying to overcome his compulsion, keeping the gun locked away and throwing out the bullets. He desperately tries to have his old prison Doctor help him, but the Doctor is off on a holiday and can't be contacted. In a cry for help he holds his hand on a burning hot-plate, and tries to get the emergency interns at the hospital to admit him for mental treatment, but as they discuss his obviously self-inflicted room they agree the hospital is over-crowded anyway and send Miller home. Miller's day job involves delivering dry cleaning and when he takes a dress to Vera (Marie Windsor) he tries to strike up a liaison, but proves inept and lapses into juvenile jealousy when she gets a phone call from a boyfriend. Miller is happy and calm only after a kill, as if he's found satisfaction after a sexual act. A bar girl tries to chat him up, and once again his inability to connect with a woman in an adult way is painfully apparent. Soon the 'sniper' becomes a media sensation, and Miller overhears his work buddies talking about it, as he's being ridden by his woman boss for his work performance. Dmytryk builds great suspense as to her fate, and whether she'll become one of Miller's victims.

Visually Dmytryk is totally in control, and the location filming allowed him to frame some remarkable sequences. Miller's first kill is a tour de force of staging and tension, and the subtle touches in an era where violence could not be literally expressed are impressive. Likewise the sequence involving a workman on a large tower, where the angles and distance are beautifully used to convey a clinical detachment, which in some ways makes the killing all the more sickening, it's slaughter from a distance and as the audience we are made to feel complicit in keeping the implications of the violence at arm's length. Miller has made his cry for help, and society has ignored him, he knows what he's doing is wrong, so therefore does not fit the legal definition of insane, and he's doing the only thing he's been trained to do, to kill.

Dmytryk concentrates his focus on the activity of the police and enforcement agencies in terms of a 'policier', or a procedural, where the nuts and bolts of police hard work will eventually lead to a breakthrough.  Menjou is dogged as the investigating officer, solid and workmanlike, no 'hero' copper, in much the same way Jules Dassin used the unlikely Barry Fitzgerald as his unglamorous detective in the earlier The Naked City. These are no 'movie star' policemen, no Dirty Harry, and it serves to bring attention to the nature of the real work involved in tracking down psychotic criminals. This also allows Kramer to bring out the socially progressive nature of the piece, where questions are asked as to what constitutes insanity? The psychiatrist character deflates public expectation (as represented by an exploitative press baron) by mentioning less than 1% of criminals fit the legal definition of insane, an uncomfortable reality that means society needs to address deeper issues.

Society demands we are productive, "everybody's got to work in this world" and as Miller is ex-military the issue of the use of skills he trained for, where in a utilitarian world he can find 'sniping' as a job of work is examined, thereby asking what level of complicity does institutional America have when it's trained up a plainly inappropriate candidate in such a deadly way? "a killer because of us"? says the shrink. These are valid questions that a reactionary Hollywood would never have asked, and an indicator of a changing direction in perspective and a short lived liberalism that would soon be crushed by the blunt instrument of HUAC and the blacklist. Hollywood would cozy up to the anemic 'Eisenhower' era and make hagiographic cop movie's and retread the old black hat/white hat stereotypes as more interesting films became marginalised once more. It would take the counterculture of the '60's and the influence of the Nouvelle Vague's boldness to re-invigorate the young filmmakers of America to garner their own Renaissance. 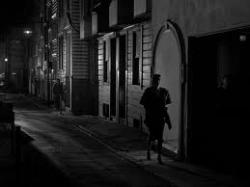 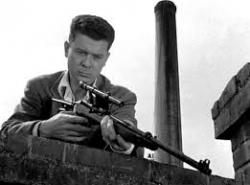 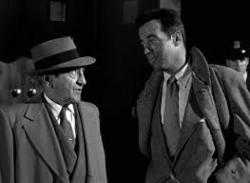 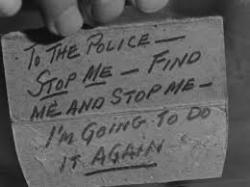