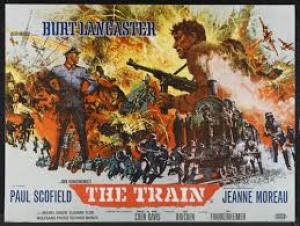 The Art of war

“The purpose of art is washing the dust of daily life off our souls”.
- Pablo Picasso

Like fellow New Yorker Sidney Lumet, John Frankenheimer rose to prominence as a director during the golden age of live television in the 1950’s before moving into feature films. Frankenheimer quickly established a successful relationship with star-producer Burt Lancaster in a series of hits like The Birdman of Alcatraz  and the cold war thriller, Seven Days in May.  In 1964 Lancaster employed Arthur Penn to helm the French Resistance story The Train,  but after a week of filming he sacked Penn and called in Frankenheimer to take over the director’s chair. Lancaster was keen to unlock the action and adventure element of the script, thinking he was in need of a hit after the commercial failure of his Italian epic The Leopard,  and Frankenheimer delivered in spades. United Artists stumped up the extra money the producers requested and Frankenheimer used it to fund big set pieces with real trains instead of models, including the real demolition of a rail yard shot as an allied bombing raid.

1500 Days into the Nazi occupation of France the Germans begin to prepare to retreat from Paris in the face of the allied advances. Colonel Von Waldheim (Paul Schofield) decides to raid some of the cities priceless art, much of it from French masters like Matisse, Monet and Renoir, and take it back to Berlin. Von Waldheim commandeers a train for the task and sets about loading and protecting it, even if some elements of his army are disinterested in helping. The heads of the resistance movement determine the train should be stopped, or at least delayed, but key railroad man Lebiche (Burt Lancaster) is not interested in assisting, judging the art is not worth human lives. Lebiche’s friend is executed whilst trying to delay the train and Lebiche is stung into action, soon taking it upon himself to do everything to stop Von Waldheim.

To add a moral framework to the action, Frankenheimer balances the narrative with the debate between the risks of loss of life in stopping the train versus the value of actual content. Labiche is not a cultured man, he’s a working class pragmatist who views the art as a bourgeoisie luxury not worth dying for, whereas Von Waldheim is an educated and sophisticated officer who loves the art with a passion Labiche cannot understand. The struggle comes to represent something deeper for each man, for Labiche it’s the denying of another victory to the occupiers, and as he gets under Von Waldheim’s skin it becomes personal. For Von Waldheim acquiring possession of the art represents a victory of culture over the barbarism that the invaders have too often exhibited, and a chance to elevate a grubby situation in its death throes.

The Train  is a fine example of the perfect Hollywood star vehicle meeting the right star, and in Burt Lancaster a star who knew more about movies and his public persona than anyone. Lancaster was an early example of an actor who was able to oscillate between populist fare that would satisfy the fans and more thoughtful pieces that had primarily personal appeal. The Train  is a straight forward action piece on the surface, but with a subtle existentialist overlay, as the two protagonists determine to follow paths that invest their lives with meaning. Lancaster is called to action, but resists, until Boule (the legendary Michel Simon) and Christine (Jeanne Moreau) contribute significantly to a change of heart. Noted English stage actor Paul Schofield, a contemporary of Gielgud, Redgrave, Richardson and Olivier (and also the only one of that group to decline a knighthood) didn’t make many films, but The Train  is an absolute triumph for the versatile actor, convincing and authentic. Moreau and Simon add a dash of Gallic zest for flavour and the combination of fleshed out, well realised characters and large scale action works beautifully, and in glorious black and white to boot.

Kurt Vonnegut said, “Go into the arts. I’m not kidding. The arts are not a way to make a living. They are a very human way of making life more bearable”.  Lebishe can’t appreciate the value of the art that he’s risking his life for, but with the barbarians at the gate it was not the time for esoteric argument. Von Waldheim knows that the value to humanity the art holds will outlive the pair of them. C’est ironic n’est pas?

Having established himself as a politically engaged filmmaker with The ManchurianCandidate  and Seven Days in May,  The Train,  as an action focused piece, represented something of a change of pace for Frankenheimer, but he proved more than equal to the task. Frankenheimer himself stated he wanted to make “character-based action movies”, and after the events of 1968 and the assassinations of Martin Luther King and Bobby Kennedy he never made another overtly ‘political’ film until 1990, and the majority of his output was in the action genre. In 1968 Frankenheimer was part of the RFK election team and a friend of Bobby Kennedy’s, and even drove him to the Ambassador Hotel the night Kennedy was killed. The disillusion that set in during the Nixon years saw the country swing to conservatism and Frankenheimer to take refuge in escapist cinema.

The film is a masterpiece of old school action stunts, fine performances and movie star clout, and in a 21st century awash with computer graphics in place of content and depth the impact on the modern viewer is pronounced. The Train  is a great escapist, action flick that also operates at a deeper level if the viewer’s attuned to the full scope of what it offers, as questions of what we value as humanity bump into militarism and greed. Frankenheimer and Lancaster created a vivid and uncompromising film, and one to savour, like great art. 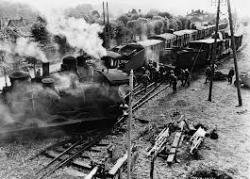 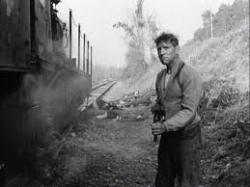 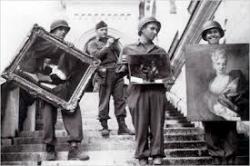 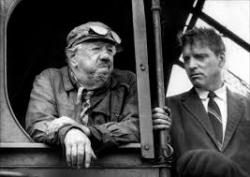 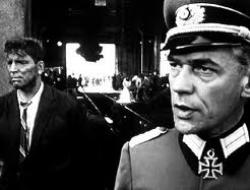 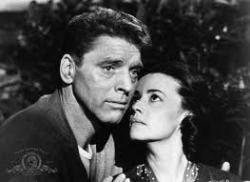