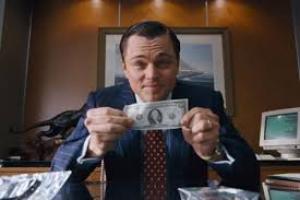 The Wolf of Wall Street

Badfellas do the Wall Street Shuffle

"When I was a boy, I used to think that becoming rich and becoming famous would make me happy. Boy was I right!" – Mitt Romney

Satire is a slippery thing, and tone and timing is all, as uber-rich Mittford Romney found out after the above quote came back to haunt him. Attempting humour, the reality of his elitist and out of touch jibe made the joke particularly hollow, and The Wolf of Wall Street, while a fine and visceral film in many areas, suffers from the same clunky disconnect.

Martin Scorsese’s epic and somewhat overblown satire arrives in town the week of a conference in Davos, Switzerland where the 20 wealthiest countries in the world get together to set some financial parameters for the future of the planet. In order to draw attention to the worldwide disparity of wealth a statistic has been released by an advocacy group to exercise the minds of the delegates. It is this, and it is staggering…. that the wealthiest 85 individuals on the planet have the same net worth as the poorest 3.5 billion people. We all knew it was bad, but this bad!? If ever there was a case against the cumulative social effects of unfettered capitalism it would have to be this; that half of the world’s population have no more assets than a number who could easily be accommodated on a single private jet.

“Poverty is not noble”,  so says Jordan Belfort, the ‘wolf’ of Wall Street. Well, neither is scamming gullible and trusting investors out of their hard earned wages, but any acknowledgement of ethics would get short shrift from Belfort, a slick operator in the trenches of capitalism in Reagan’s America. As Tom Shadyac points out in his earnest 2010 documentary I Am,  no civilisation had previously developed a model where the best hunter kept 99% of the meat, generally in a primitive society co-operation demanded a sharing of the spoils to benefit the society as a whole. Darwinian Theory even mentions empathy and co-operation as being more beneficial to humans than simply the triumph of the strongest. In fact ‘survival of the fittest’ incorporates the notion that co-operation is the thing that’s allowed humans to dominate a planet where we are not the fastest or the strongest animals, we don’t have the best eyesight, or the best hearing, yet it’s humans who stand atop the natural world. Modern, poorly regulated capitalism is attempting to turn this model on its head.

Scorsese tends to black comedy and excess in this satire, and if he’s essaying a culture where ‘too much is never enough’, then he has successfully translated that via the bloated running time and the opulent visual feast on offer. The film could lose 30 minutes and not suffer; a sequence where Belfort and his partner Donnie (Jonah Hill) overdose on old Quaaludes feels superfluous, (to non pillheads at least!) as does much of the associated Switzerland bank subplot. The film works superbly well when it focuses of Belfort’s behaviour, particularly as embodied in Leonardo DiCaprio’s powerhouse and committed performance. DiCaprio has seldom been better, and he’s surprisingly matched in a couple of superb bedroom confrontations, by young Australian actress Margot Robbie, as his trophy wife Naomi.

In America the lines between business and religion are virtually non-existent, and Scorsese frames many of Belfort’s ‘pep’ speeches to his brokers as a quasi-religious or evangelical experience. Belfort primes his parishioners into an excelis of fervour for the holy dollar, stamping up and down his platform like an evangelical preacher, and the Rolex on his arm only underlines the comparison. Belfort is inculcated into the ‘sect’ of brokers by Hanna (Matthew McConaughey), an eccentric broker who makes a lot of money and who also seems to have established a link between excessive masturbation and the financial industry (thanks Woody). Belfort ropes in the execrable Azoff (Jonah Hill), an amoral functionary who takes to the excessive lifestyle and dubious business practices like a duck to water.

Belfort and his flock have nothing but contempt for their ‘marks’, the customers they fleece on a regular basis, and it’s this philosophy that underpins the narrative, and ironically provides the trigger for Belfort’s undoing. When the illegality of his schemes comes to the belated notice of the regulatory bodies, Belfort attempts a bribe, but after that fails he cuts a deal to rat out his ‘friends’. Belfort is to announce his exit from the company so the Feds can make their sting, but at the last minute he relents. The reason he pulls out is he considers accepting the deal would make him no better than the weak stooges he suckers money out of every day, the thought disgusts him and he decides to tough it out. Azoff has no level of insight or anywhere near the hubris of Belfort, he’s merely a flunky to facilitate the scams and to join in the ‘rewards’.

Scorsese teams up with old pal and ex-Band supremo Robbie Robertson to source the excellent music, dominated by a ballsy, Chicago blues soundtrack. Thelma Schoonmaker edits for Marty, as usual, and many sequences are virtuoso passages, but the flab is in the length. Hanna is deftly portrayed by Matthew McConaughey, who makes an indelible cameo, and Rob Reiner does welcome work as the only voice of moderation in a sea of indulgence. Jonah Hill is fine as the appalling Azoff, but it seems Scorsese’s idea to indicate that we are looking at a ‘comedy’ is to give him overlarge, fake teeth! The broadness, and unevenness of tone dampens the edge of the satire, and it’s this gaggle of mixed signals that holds the film back from true greatness.

The Wolf of Wall Street  is, stylistically at least, part of a loose trilogy of ‘excess and immorality’ with Goodfellas  and Casino,  and it would seem the gangsters have nothing on the brokers. The voiceover and editing are of a pair with Goodfellas,  with the alpha-male protagonist reminiscing about past deeds, and even the tone DiCaprio adopts is similar to Ray Liotta’s. What separates the trio is that we feel there is affection for the gangsters somewhere in the process, imbuing the first two films with a warmth and heart that we don’t find in Wolf.  It’s easier to find affection for criminals who know they are criminals, in an observational sense, it’s much harder when the criminals lack any modicum of self awareness.

In evolutionary terms Belfort may be a highly desirable alpha hunter, but his pack is made up of free riders like Azoff, and ultimately Belfort is no better than the parasitic free riders he creates and supports. In the natural world free riders are weeded out by the collective, as community cohesion depends on striking a balance conducive to ongoing survival. If the modern free riders in the financial industry can prosper to such an outrageous extent, because of a lack of regulatory oversight, then we are simply contributing to our own inevitable, collective downfall.

It will surprise no one that, in Davos, the  bankers say regulation has gone too far, arguing for even looser laws than ones that set the ground for the GFC, the disaster and near total collapse of the market system in 2008.  Further than that, we have Neo-cons like Australian Prime Minister Tony Abbott at Davos stating, “Taxes need to be fair, and low, in order to preserve the legitimacy of free markets… profit is not a dirty word”. Remember this is in a year where profits have never been greater for most AAA rated companies, where the Dow is at historic highs, underwritten by taxpayer support in the form of Quantitative Easing. It seems nowhere in the western world is the idea that raising taxes, from those who have most and are able to pay, in order to pay for essential services is even a remote possibility within the suite of options available to spineless politicians. Trickle down economics is a lie, unless we assume the trickle is urine as those below are pissed on from a great height by the Jordan Belfort’s of the world.

In a great and galling irony Belfort secured his financial future by writing a book, the one that Scorsese based this film on, and in true Hollywood fashion he appears in a cameo at the end. In that scene the sheep line up in Auckland (I know!) to be fleeced by the motivational speaker Belfort has become, taking the myth that everyone can be filthy rich to the rest of the world. Belfort's bleatings are not underpinned by the idea that to become rich you simply work hard, but that you need the secret information from the 'insiders', and then you're 'in the club', away from the plebs and on the road to happiness. The scene is again shot like a church with eager parishioners keen to soak up the sermon, and to join the adepts.

Scorsese’s epic might be a well intentioned cautionary, morality fable, but it doesn’t have the heart of his earlier epics, even though it has a top shelf characterisation from DiCaprio. Australian writer Clive James commented that the problem with modern movies is “the continual need to astonish”,  and this aesthetic lies at the heart of Scorsese’s recent cinema, worth a look, but not likely to replace a Raging Bull  or a Taxi Driver  in his hierarchy of achievement.  Less is more Marty, less is more. 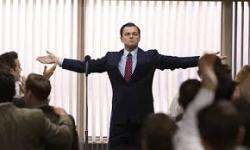 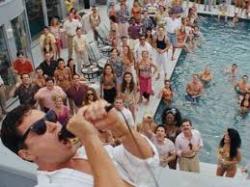 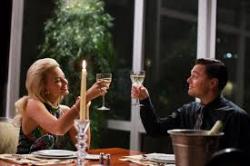