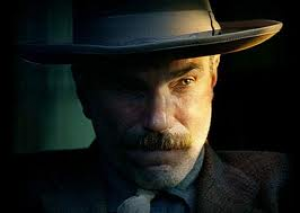 There Will Be Blood

The American oil boom of the early 20th century is the backdrop for Paul Thomas Anderson's exploration of the nature of ambition that morphs into obsession and its relationship to human interaction. Anderson moved away from the low key contemporary drama that his 2002 feature, Punch Drunk Love,  represented to a wide scale canvas of epic inner conflict set against the wide opens hills of Southern California. Central to the success of the film is the towering performance from the pre-eminent actor of his generation, Daniel Day-Lewis, in top form and Anderson backs him in every inch of the way. Anderson had mainly shown a flair for the handling of ensemble performance pieces but here he displays a deep understanding of the actor's art allowing Day-Lewis to extract astounding depths of emotion in his brutal characterisation of an "oil man".  The film bristles with authenticity and period detail and is lovingly framed by Anderson's regular cinematographer Robert Elswit, who duly won the Academy Award for his efforts.

Anderson opens with a 14 minute sequence that is essentially an evocation of a silent film, as Daniel Plainview (Daniel Day-Lewis) pounds away with a pick at the face of a mine shaft. Daniel spends several solitary years digging and gouging the earth for traces of oil, and eventually his endeavours require help and he is seen with a partner, who has with him a small baby boy. The partner is killed in an accident and Daniel takes over the welfare of the boy, H.W (Dillon Freasier) who he then passes off as his own son. Daniel goes around trying to buy up land to drill on, or to lease an option in competition with the larger oil companies like Standard Oil. He successfully buys land in Little Boston and sets up a large scale operation that strikes "an ocean of oil".  Daniel resists an offer from a larger company and only needs a small parcel of land to be able to build a pipeline to the ocean. To secure the rights he has to humiliate himself in a religious ceremony with someone he'd hoodwinked in an earlier deal. Daniel goes through with the humiliation and the pipeline ensures he becomes a hugely wealthy man, but at some personal cost.

Plainview, as portrayed, is a singularly despicable man, driven to a manic intensity that he struggles to keep a lid on. Plainview knows that he must 'appear' to be normal and part of his scheme of looking after H.W is to exploit him in his dealings by coming across as a family man when nothing could be further from the truth. In a remarkable exchange with a man he thinks is his long lost brother, Plainview lays it on the line for the first time, "I have a competition in me, I don't want other people to succeed, I hate other people",  and it's as close to a personal philosophy as he can articulate. Plainview says he wants lots of money to effectively isolate himself from other people, and in this end he becomes very successful. He trusts no-one and if he perceives a slight he is prone to irrational rage, and in this regard he is at least self aware. When H.W grows and tells his father he wants to set up a company of his own in Mexico he is told, "You're not my son, you're a competitor".  H.W declares "Thank God there is no part of him in me",  as he leaves with the truth.

Anderson writes the issue in code in his lead characters name, there is nothing of the real Daniel in plain view, it's mostly hidden. Plainview's rapaciousness is typical of the 'boom' mentality that went with the Oil rush, a black gold, and the fever it engendered was just as powerful. Fortunes were made and, as with capitalism, there were huge winners and lots of smaller losers. The joys of family life are lost on Plainview, even though the possibility exists during this entire period where he does engage in society when he deems it expedient. He manipulates Mr Sunday to stop hitting his young daughter Mary, and he even co-opts a blessing from Eli Sunday (Paul Dano) as the well is about to start operation, knowing it will reflect better on him to do so with the common folk. Religion is a product to Plainview, a commodity, "One goddamn helluva show",  he says, after Eli gives a 'healing' demonstration at his church, but later severely beats Eli when he doesn't heal H.W's loss of hearing after an accident, calling him out as a charlatan. Plainview sells oil, Eli sells 'spiritual' snake oil. After the humiliation of having to be baptised by Eli and made to publicly kneel and confess to being a sinner, Plainview gets even when Eli calls needing money, having him repeat, "I am a false prophet and God is a superstition".

Anderson's ironic title, there will in fact be no blood as Plainview's son was effectively adopted, suggests a 'nature versus nurture' component to the text. Plainview's tragedy is that he instinctively intuits that man is a social animal and functions better in a collective environment, and yet innately he can't connect with this natural law, an outsider in plain sight. Plainview knew he had this rage in him, he asks his blood 'brother' if it's in him also and is suspicious when he replies it is not. Plainview knows this inner beast can't be controlled or hidden forever, as he tried to kill it with booze and acquisitions, but all the while knowing it lurked in the recesses of his mind, does he reveal the truth to H.W in order to set him free of the fear of that contamination? Is what seems a vicious act actually one of compassion from a man well aware of his own demons?

Daniel Day-Lewis won an Academy Award for his work, and this performance will surely stand as one of the great achievements of screen acting. It dominates the tone and the substance of what Anderson is trying to convey and elevates the material to another level entirely. His characterisation of a man struggling to appear as normal and all the time wanting to build a wall between himself an other people is mesmerising, a truly empty figure who gains every conceivable material possession and yet in the and has nothing. Plainview is an operatic level tilt at tragedy and obsession, and in Day-Lewis' hands a master class in nuance and nerve. One goddamn helluva show. Paul Thomas Anderson deservedly won a stack of awards for the film, and then went on to create another singular meaty part for one of his regular ensemble players in Philip Seymour Hoffman in 2012's The Master.  No matter the success of his later endeavours There Will Be Blood  will always loom large in his legend, a masterpiece of American cinema. 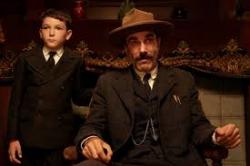 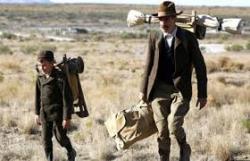 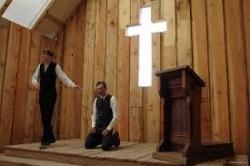