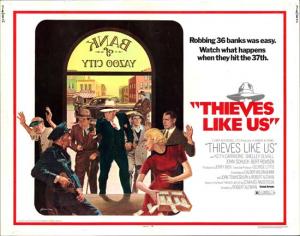 Altman's post modernist revisionist gangster film (as you do!)

"Chance is another name that we give to our mistakes. And all of the best things in my films are mistakes."
~ Robert Altman

Robert Altman followed a trend set by Bonnie and Clyde in making this depression era ‘lovers on the run’ genre piece, filmed once before by Nicholas Ray as They Live By Night in the late 1940’s. Several of the American Renaissance directors had or would follow suite, notably Scorcese with  Boxcar Bertha  and Malick with Badlands, and even Spielberg with his Sugarland Express examined the genre, albeit set in the later era in which it was made. Altman went back to the source novel by Edward Anderson and wrote the screenplay in collaboration with longtime Kubrick favourite Calder Willingham and his Nashville writer Joan Tewkesbury.

The look of the film is a washed out and gorgeous evocation of the depression era, shot with care and detail by cinematographer Jean Boffety, a Frenchman who’d worked for Renais, DeSica and Sautet. It walks a line between a documentary reality and a romantic rendering of a decidedly unromantic approach to the lives of the protagonists, a paradox that Altman manages to make work with his peculiar finesse. A matter-of-fact treatment to the lives of criminals brings the mundane aspects of their existence into focus and keeps a lid on overplaying the adrenalin charged hold-up’s, which are shown as straightforward pieces of business and not opportunities for excitement and tension.

Three trustee criminals, Bowie (Keith Carradine) T Dub (Bert Remsen) and Chicamaw (John Schuck) break out of gaol (if you can’t trust a trustee, who can you trust’?) and set their sights on robbing more banks. Lying low with relatives Bowie strikes up a friendship with Keechie (Shelley Duvall) that eventually deepens into love. Altman sets up the petty vanity of the robbers when a newspaper article focuses on Bowie more than the others, and the hierarchy of notoriety is a theme continued when Chickasaw’s brother Dee (Tom Skerrit) complains he’s never been mentioned in the newspaper once, an indicator of the public’s appetite for news on gangsters. Altman counterpoints the action with constant inter-cutting of audio from contemporary radio shows, like Orson Welles’ reading of ‘The Shadow’, instead of using a conventional score, providing a sometimes ironic commentary on the action. He often juxtaposes contradictory elements within the narrative, e.g. when the three are holed up with T Dub’s sister in law Mattie (Louise Fletcher)  they settle down for a benign family meal where Mattie is continually berating the children for the habits or manners while T Dub is reading a breathless account of their latest robbery to the table, all fall quiet as he reads about a reward having been posted, ‘dead or alive’.

Altman is commenting on crime as ‘entertainment’, while showing the banal and mundane aspects of the lives of criminals, the reality of crime. The fact that he is also making an entertainment about crime plays into the post-modernist deconstructionist overview of this and much of Altman’s work. Altman again puts one of his white actors in ‘blackface’, as he did in The Long Goodbye, having already had a radio news item tell of the lynching of a black man, these different levels of obliquely acknowledging a ubiquitous racism of the time and the utter marginalisation of the negro community. Bowie’s closeness to Keechie grows after he’s injured in a car accident and Keechie helps nurse him back to health as a Romeo and Juliet radio play underscores their involvement, also foreshadowing a tragic end. They hole up in a rural cabin where Bowie tells her he must meet his partners one last time to live up to a promise he made. Bowie is reluctantly talked into one last job by an irritated and drunk Chicamaw and the three duly rob the Yazoo City Bank, while a Roosevelt radio speech about the New deal plays as ironic accompaniment. The killings that Bowie rationalised previously as being part of the territory now affect him emotionally, his attachment to Keechie having awakened the empathetic side of his nature. Bowie returns to Keechie, but T Dub is killed and Chicamaw captured, Bowie decides to clear the slate by freeing Chicamaw while they stay in hiding at Mattie’s new motel park. Bowie frees his unstable colleague, but is disgusted by his choice to kill an old prison warden and dumps him to return to Keechie.

Keith Carradine and Shelley Duvall, as opposed to Beatty and Dunaway are the perfect non movie star types to frame this unromantic take on depression life. Altman uses the actors in an almost Bresson-esque way, the delivery is flat and emotionless mostly, particularly in the courting scenes. Schuck and Remsen are effective as the unremarkable partners and Louise Fletcher hints at what she’s capable of in her stern portrayal of Mattie. The art direction is flawless and the look and feel of the film is entrancing, it is somehow both elegiac and non-elegiac at the same time.

Altman’s view of American life would be expanded to a contemporary setting in his next epic and transformational masterpiece Nashville, but it’s an indication of his feeling for the country and love of it that his criticism’s are so incisive. He essayed American life via the prism of many of the quintessentially American motifs and settings, the West, country music, depression era gangsters, Chandler’s Philip Marlowe, the Korean war and eventually Hollywood itself in The Player. In order to criticise with authority you need to love or respect your subject and in Altman’s world view it’s the duty of a patriot to question everything constantly, not to blindly accept, and in a time of Nixon and the Vietnam war this look back through not so rose coloured glasses furthered his dissection of the national psyche. At one point T Dub ruminates on the respectable people who are ‘thieves like us’, wishing he was a doctor or a lawyer or a politician and then he would "rob people with my mind instead of a gun". Depression era America saw the unemployment rate rise to nearly a third of the working population. If Bonnie and Clyde had the unintended consequence of mythologising an era and made petty gangsters iconic cultural figures then Altman seemed to want to provide an antithetical position. A great film. 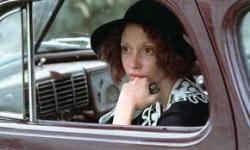 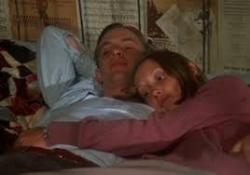