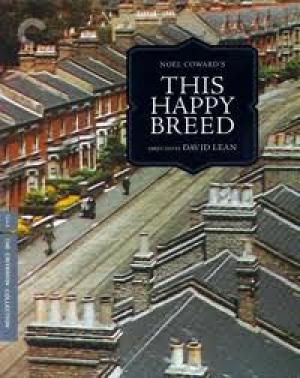 There'll always be an England

"My distinguishing talent is the ability to put people under the microscope, perhaps to go one or two layers farther down than some other directors".
~ David Lean

This Happy Breed  is Noel Coward's love letter to the 'common' English man, and he himself said it recalled his years growing up in the suburbs, a place not normally associated with Coward's oeuvre. This was the second collaboration of Noel Coward and David Lean after their co-directed initial project, the hit war film In Which We Serve.  This time Lean takes the director's chair solo but has significant help from Ronald Neame as his cinematographer, who shot in three stripe technicolour, and would go on to great directorial success in his own right years later. Neame also collaborated on the screenplay with Lean, based on Noel Coward's hit play, in fact Coward wanted to play the part of the patriarch Frank himself, as he did on the London stage, but Lean convinced him a working class role for would not work in light of Coward's public persona as an archly cultured sophisticate. Robert Newton took the role of Frank, and his deep background on the English stage, including many Coward productions, enabled him to fill it admirably in one of the few sympathetic roles he would have, and he worked again for Lean as Bill Sykes in his adaptation of Oliver Twist  a few years later.

The action concerns the years between the wars, 1919 to 1939, and the loves and life of the Gibbons', a 'normal' English family who move into a house in Clapham after the father, Frank is de-mobbed, having survived the horrors of trench warfare in France. Lean moves his 'God's eye' camera across the duplicate row's of identical suburban tenement houses and settles on the rear of one, entering via a series of dissolves as the key is turned by the new occupiers. Frank and wife Ethyl discuss their past, "We should be grateful"  says Ethyl, "To who"?  replies Frank, and their future, as Frank has secured a job with a travel agency that runs tours to his old battlefield sites, "Some people have a funny idea about enjoying themselves",  setting up Frank's understated and pragmatic view of life. The three children join the parents, Reg, Violet and Queenie (Kay Walsh), and Frank discovers that his next door neighbour Bob (Stanley Holloway) is an old army chum. The house is full with Frank's mother and sister also living there, times are busy but the home is warm and welcoming. The years pass, events come and go, a large military parade, the Wembley Exhibition, the General Strike of 1926.

Bob's son Billy (John Mills) is a sailor and is courting Queenie, who despises the 'common' life in the suburbs and dreams of a different, more glamorous life, "I'm different"  she says, "I hate living here".  The young people are seeing all the Broadway films, an escapist  activity for most, but to Queenie it suggest there is another life waiting elsewhere. Eventually she leaves for a married man, an event that sees her mother disown her. Frank and Ethyl share quiet philosophical moments, Frank's humanity shining through, "someone said we were a nation of gardeners...  we might be a bit slow, but it suits us and it always will".  Reg gets interested in Socialism and after he gets beaten up in the General Strike disputes and his father gives him a speech that remains the heart and soul of the film. "The mistake people make is to think you can fix everything wrong in the world in a hurry.. it's not systems and governments, human nature is at the bottom of the 'ole thing... it's up to us ordinary people to keep things steady".  Britain at the time was on the verge of a kind of revolutionary impulse, much feared by the Government after the events in Russia in 1917. Life goes on, and soon the nation is facing another threat from Germany and Hitler, and a new generation will go off to war. Ethyl and Queenie are pushing a pram with their new baby boy through a park as air raid shelters are being dug. "We're the people and we just keep coming", would be John Steinbeck's take on it.

The delight to modern viewers is the complete lack of artifice in the performing and the staging of the film. Coward's ear for the working class argot seems spot on, having grown up in a far flung colonial Commonwealth country a generation or two later, full of British influence, it feels authentic. Coward focuses on the petty concerns, the day to day banter and the over reliance on the mystical healing powers of a 'good cup of tea' to cure everything wrong with the world is spot on. Coward was nothing if not an arch observer, even if in his own life he now only saw the suburbs in the rear view mirror of his Rolls Royce. Lean allows the main theme, the regeneration of life, the natural cycle of families from one moment of joy in a wedding, to a moment of tragedy in a death, to feel organic rather than overtly imposed on the narrative. The scene where Frank and Ethyl are notified of Reg's death is a case in point, as he films it beautifully from an empty room without seeing the message delivered, letting the couple stagger into the room with the guts knocked out of them. Devastating, and a match for key part life's eternal rituals play in any John Ford film.

Celia Johnson is wonderful as Ethyl, warm and caring, yet firm and brittle at the same time. She would have her signature film role with Lean the next year in the superb Brief Encounter,  as the housewife who falls unexpectedly in love in a train station. Newton, mostly cast as villains or in broad comedy is fine as the down-to-earth Frank, giving a lovely understated performance that keeps the film firmly anchored in reality. He's matched in portraying that common decency by John Mills as the young sailor, and David Lean would soon give the young actor his first starring lead in Great Expectations  in 1946, who would remain a star for decades.

The film was a timely affirmation in 1944 of British pluck, a hymn to the strength of the ordinary Englishmen who had borne the troubles of the wars and the Great Depression and kept going, now with the end at last in sight for the second great conflict. Frank looks at the empty room at the end, wondering if part of the essence of the family remains to imbue the next occupiers as the cycle continues, it's a deep poetic moment from a people who not renowned for such introspection. The earthy philosophy of the working class types, the refusal to sugar coat reality, "she didn't pass on, she died",  the reliance on each other for support, all shown with tenderness and affection. Coward may have been an upwardly mobile success in a societal sense, as Queenie (is the name a hint?) hoped to be, but he never forgot where he came from and never lapsed into caricature here, the words are authentic and heartfelt.

In only his second film, Lean was displaying a command of the medium that would see him rise to the first rank of world cinema figures. Only Alfred Hitchcock could rightly claim to be a more influential British film figure over the long haul, even if he spent many productive years in America. Lean showed his keen eye and cinematic abilities early, especially in the superior filmmaking and storytelling of the understated gem that was and is, This Happy Breed. 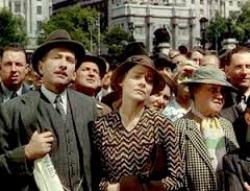 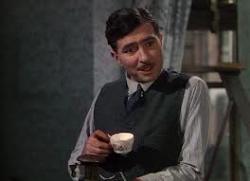 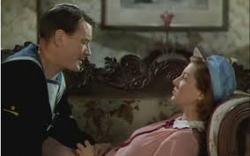 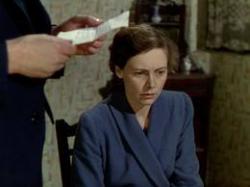 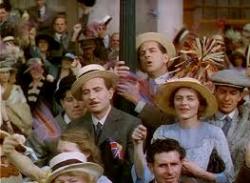 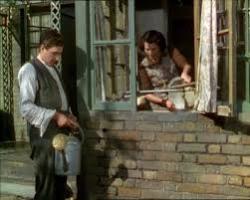