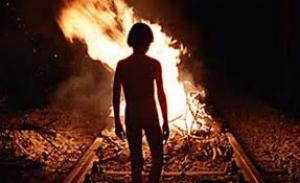 Time of the Wolf

Michael Haneke's follow up to the worldwide success of his film 'The Piano Teacher', further explored his stock character couple who took the names of Anne and Georges, this time in a post apocalyptic wasteland in the French countryside. Haneke again called upon the feted star of his 'The Piano Teacher', Isabelle Huppert, to take the role of Anne, who shepherds her two young children through the dangers of a breakdown of society in the aftermath of an unspecified cataclysmic event. In the title, Haneke makes an oblique reference to a Norse myth called 'Völuspá', which alludes to a period before the end of the world. As he did with 'Funny Games' he examines a middle class family under pressure, and asks what constitutes civilised behaviour when social constructs disappear.

Anne and Georges drive to their country home, a well off couple in a comfortable vehicle taking their two children, Eva (Anaïs Demoustier) and Ben (Lucas Biscombe) to the holiday house. They pull in to the driveway and start unloading what appears to be supplies for an extended stay and enter the house, whereupon an armed man confronts them. Driven from their home and without food, their only possession a pushbike, they seek shelter in a small barn, where they meet a young runaway boy (Hakim Taleb), much the same age as Eva. The boy tells them of a nearby station where people are waiting for a train to take them out of the area. The group makes it's way to the station, where different groups form small cliques and racial and other rivalry's threaten everyone's ongoing survival.

A favourite trope of Haneke's is to dump 'normal' people, mostly from the middle to upper class bracket, into a situation of extreme stress, and then dispassionately observe how they cope. In the case of 'Time of the Wolf', he does put a family into a catastrophic situation, but after observing them attempt to keep a separation from any other elements of society, he then has them interact with other's from different strata's. This provides an opportunity to affirm that humans can co-operate or compete, and that life can indeed be a delicate balance between those two imperatives. Haneke sets up a scenario where the family unit is the last remaining plank in a societal structure, holding out against a purely 'every man for himself' ethos. The individual that Haneke follows, the runaway boy, is isolated and alone, eventually succumbing to the risks that running as a lone wolf brings, while Anne's family unit survives the rigors of the trial, albeit with a different perspective on each other. Eva reaches out to the runaway boy, who s given the chance to join the small society of the family, but he takes his chances elsewhere, and seals his own fate in the process.

Isabelle Huppert continued to build a repertoire of performances in modern cinema second to none with the role of Anne. After the career high of 'The Piano Teacher', she again proves to be the ideal Haneke protagonist, a woman forced to find depths of strength and reserves of courage when exposed to the darker sides of human nature. In her first Haneke role, the darker side was in the piano teacher; here it's external and threatening, and brings out the protective 'lioness' side of Anne's nature. Haneke observes with a clinical and detached eye, and that means he does not overdo the close up, preferring to place the human figures in the environmental context within which they find themselves. Haneke will shoot scenes in medium to long shot, even if the emotions are intense, rather than drill in close to squeeze every drop out of the audience's sympathies. The technique can be confronting for some, used to the close up and to Hollywood sized emoting of lead actors, but the space to observe that Haneke creates serves to place the figures in a broader context that augments our understanding. Haneke plays out this aesthetic to it's logical conclusion, giving us a kind of resolution, but one that is largely left to the viewer's judgement. Haneke seems to understand that life doesn't always give us the 'full picture', we make decisions and judgements based on fragments, and if life plays these games, then why shouldn't he?

Haneke is the modern filmmaker, who seems to have taken inspiration from Bresson, Antonioni and early Godard equally in his use of time and space, an oblique perspective, and in his pursuit of a 'neutral' artistic aesthetic, trying to push our understanding to areas of emotional rather than intellectual knowing. In Haneke's universe, we are all from nature, and of nature, forever condemned to dealing with the flaws and foibles of our own and of our fellow humans, and always in the context that man is a social animal. In this context, the morality Haneke asserts is one that shifts uncomfortably, as all the moral absolutes that Anne had taken for granted shift themselves. Haneke avoids the 'superman' view of the world, the singular heroic individual who comes to save other's before disappearing from whence he came, albeit tortured and estranged. Haneke affirms we are all in it together, so we'd better understand that empathy and love are prime Darwinian traits that we have evolved because they confer a survivalist advantage. That understanding should not reduce the achievement or dilute the concept for the poets and romanticists, but merely admit to the reality of the situation.

Michael Haneke continues to be the most brilliant and complex of modern directors, and a worthy successor to the giants of the past. With 'Cache' (Hidden), 'White Ribbon' and 'Amour', he's already responsible for the most urgent and effective cinema of the new millennium, long may he run. 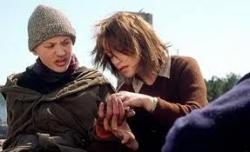