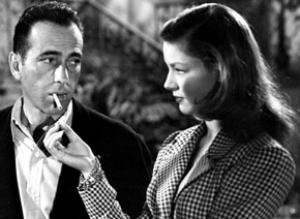 To Have and Have Not

Hawks brings up baby, a star is born.

Howard Hawks goaded his friend Ernest Hemingway into helping buy the rights back from Howard Hughes for To Have and Have Not by telling him ‘I bet I can make a good film from your worst book’!. Hawks acquired the rights and promptly on-sold them to Jack Warner, keen to find a new property for the suddenly white hot Bogart coming off the massive success of Casablanca. Bogie was signed on and Hawks managed to cast his young protégé, Lauren Bacall, as the female lead. Bacall was signed to Hawks’ production company as a 19 year old New York model, and both Hawks and his wife Slim had been grooming her for stardom for some months. Hawks did his usual trick of assigned first class writers to adapt the screenplay, in the case Jules Furthman and William Faulkner, and had to change the setting from Cuba to French Martinique to avoid political problems at the request of the Roosevelt administration.

Bogart’s Harry Morgan is the skipper of a fishing boat in Martinique, living the life of a carefree adolescent, responsible only for his own wants and needs, except for his old alcoholic first mate Eddie (Walter Brennan). The atmosphere of the war surrounds him, yet he is oblivious, preferring to continue ferrying rich American tourists around the fishing grounds than to get involved with the anti-Vichy clique who are asking him for help. Into this stew of intrigue, at the central hotel that Morgan boards at, wanders the young and beautiful Marie (Lauren Bacall), and the sparks fly between her and Morgan. Morgan is owed money from an American tourist, who has his wallet pickpocketed by the mysterious Marie, much to Morgan’s chagrin. Morgan refuses the request of the hotel owner Frenchy (Marcel Dalio), to help collect resistance fighters and ferry them to safety, meeting the underground members in his room, but declaring his disinterest in politics. ‘You get sent to Devil’s Island for that’… The authorities have followed the resistance members to the hotel and raid it, a shootout follows that has the American tourist killed, his money confiscated and Morgan and Marie both suspects in criminal activity.

Morgan is now suddenly in need of money and agrees to help the resistance, his feelings for Marie have deepened and he’s also motivated to send her to safety in America. He picks up the resistance leader and his wife and takes him through the blockade, aiding further by removing a bullet from the husband. Morgan and Marie have to extricate themselves from police attention before finally leaving arm in arm. Hawks shows his mastery of detail by elevating Brennan’s stagey, drunken twitch of a walk, to a  perfectly choreographed dance as he follows Morgan to the tune of the hotel dance band. Bogart’s change of heart because of a woman is not as convincing as his motivation in Casablanca but it hardly matters, the romance between Morgan and Marie is the only reason the film gets made, and it’s reason enough. Marie merely unlocks an inner decency that we suspect is there all along, but is in need of a catalyst, in this case the unlikely small time hustler that Marie represents. For her part she merely wants Morgan to ‘mind’ that she’s a hustler, not to try to change her.

The plot details are relatively unimportant as such, what is more telling is that the finessing of the property is a superb example of Hollywood pragmatism at work within the studio system of the early ’40s. Warners essentially wanted another Casablanca and Hemingway’s story was merely the start point, as little of the novel remained in the final film. Hawks added a piano playing character in Hoagy Carmichael’s Cricket, allowing for Bacall to do her songs, including the sublime Johnny Mercer tune, Am I Blue? A myth has persisted for years that a very young Andy Williams voiced the song, but it seems Bacall sang it herself, Williams was merely tested in case newcomer Bacall wasn’t up to the mark. Casablanca had a near clean sweep of the Oscars while To Have and Have Not was shooting, so the pressure was on to duplicate its success in any way possible, Hawks had cannily cast several veterans of Casablanca in his film, including the fantastic Marcel Dalio, immortal as the Marquis in Renoir’s The Rules Of The Game. Hawks also wanted a good launch pad for a major new star in which he had a large investment. Hawks was furious with Bogart for seducing Bacall as he thought it threatened his investment and the pair fell out for a time, requiring Warner to smooth it over with more money for Bogart. Once Hawks was convinced Bogart was serious and not merely playing around, the relationship was repaired.

The film remains a superb example of Hollywood’s top class craftsmanship at work. Bogart’s character may not have the fatalism of Rick in Casablanca but that’s leavened by the hotter love affair with the feisty Bacall, instead of Ingrid Bergman’s angelic Ilsa, and the whip cracking dialogue that the much worked over script provides. Bacall’s presence is a breath of fresh air, she grabs the screen and matches Bogart at every frame, her edgy persona and strong willed independent woman a typical Hawks female.

Hawks knew he had a winner, and would sign them both for his next project, the labyrinthine turns of The Big Sleep. Hawks remained the master of getting the most out of a property, a clear eye and a keen attention to detail made even a formulaic confection like this achieve moments of great effect, a studio bound dream from another time, another place….. another world. A classic. 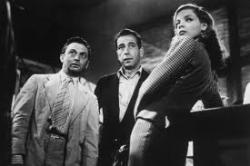 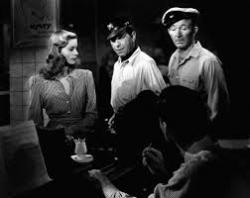 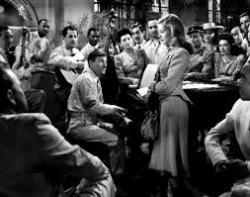 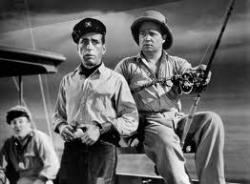 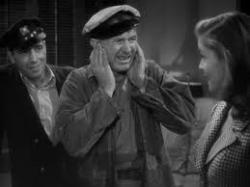