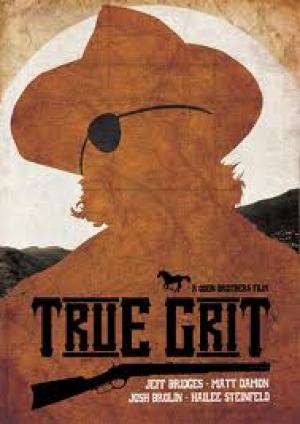 As if it were not enough for the Coen Brothers to master several distinct genres of modern cinema, with True Grit they turn their hands to a classic American form, the western, and make a film to rival the best of Ford and Hawks. To underline their achievement they do it with a remake of a John Wayne vehicle, the one Duke won his Oscar for no less… that takes some balls. The brothers had made one of the great modern day westerns with their 2007 masterpiece, No Country For Old Men, but their re-imagining of Henry Hathaway’s original marked their first excursion into the mythical territory of the old west. Coen favourite Jeff Bridges steps into the Duke’s massive boots and a newcomer named Hailee Steinfeld steals the picture with her preternatural and knowing portrayal of Mattie Ross.

Mattie’s father is killed by Tom Chaney (Josh Brolin), a drunken ranch hand employee, and Mattie takes it upon herself to seek justice for her dead father. Chaney has fled and is thought to have fallen in with Ned Pepper’s gang, in an area outside of the local Sheriff’s jurisdiction. Mattie settles on Rooster Cogburn (Jeff Bridges), the ‘meanest’ Marshall in the territory and employs him to track down Chaney. A Texas Ranger LeBoeuf (Matt Damon) is also hunting Chaney for crimes he committed in Texas and teams up with Rooster to track Chaney down. Mattie insists on joining the pair, much to their bewilderment, and the trio make an unlikely and uneasy alliance as they follow Chaney’s elusive trail.

The Coen’s update taps a relatively modern tradition of earthy and realistic westerns, far removed from the old, glossy Hollywood studio concoctions. In the 1970’s the New Hollywood, on the heels of Sam Peckinpah’s visceral The Wild Bunch, embraced the idea of more realistic settings and gritty art direction, as seen in Altman’s McCabe and Mrs Miller, Robert Benton’s Bad Company (which starred a young Jeff Bridges) and Arthur Penn’s Little Big Man. The ‘revisionist’ style reached it’s apogee with it’s pre-eminent progenitor, Walter Hill and his work in The Long Riders, whose influence has resonated through the years. The Coen’s effort followed closely on the heels of HBO’s magnificent Deadwood, also Walter Hill influenced, and their version proved to be the antithesis of Hathaway and Wayne’s old school original.

The brothers manage to tread a fine line in making an unromantic and realistic take on the righteous frontier vengeance tale that is at once romantic and prosaic. Aided by Bridges’ savvy update of the old reprobate lawman they capture a duality that defies easy categorisation. Rooster here is more quixotic than formidable, and with Mattie as a midget Sancho Panza the pair makes an unlikely vigilante team. Hathaway’s shootout scene feels like a classic donnybrook bar fight on the prairie, whereas the Coen’s unearth the melancholy of an old knight tilting at one last ride to glory, and the outcome seems more uncertain as a result. Wayne’s Rooster has almost no ambiguity about him, Bridges lawman is nothing but.

The Coen’s employ the technique of having their actors speak an arcane variant of English, and provide a film as beguiling to listen to as it is to watch. They cleverly score the film as a slow build, having Carter Burwell’s sparse piano pieces set the early tone, before widening the score to quasi epic dimensions as the action unfolds. As Rooster is challenged to justify his life choices under the intense grilling of Mattie, the old certainties collapse around him. Mattie needs to understand the world in ways Rooster can’t comprehend and the old lawman is forced to looks at his life and reassess. The tension and comedy comes from this unlikely coupling, and Mattie comes to view the experience as the pivotal and defining one in her life.

Jeff Bridges anchors the whole shebang, but it’s Hallie Steinfeld who shines, long staying in the memory with one of the pre-eminent adolescent screen characterisations in many a year. The realistic aesthetic that the Coen’s adopt here suits the tone Stienfeld creates and completely modernises the role compared to Kim Darby’s wide eyed original. Bizarrely Mia Farrow had signed on for Mattie in the 1969 version, and was frightened off by Hathaway’s ogre reputation, even asking Hal Wallis that Roman Polanski replace him! Singer Glen Campbell was poorly cast as LeBeouf in that version, causing the balance to be seriously disturbed, but the update has Matt Damon as the Texas Ranger and he proves his worth, playing against type, by providing a fine lightweight foil for Roosters barbs.

In returning to a more faithful adaptation of Charles Portis’ source novel, the Coen’s unlock more humour, violence and ambiguity than the sanitised version Hathaway provided. The film is book ended by the older Mattie reminiscing about the episode, and finishes with her attempt to reunite with Rooster, who is working in a ‘wild west’ show, giving the proceedings a bitter-sweet tinge. The biblical allusions are strong, opening with the quote ‘The wicked flee where none pursueth”, providing a bleak tonal centre given the retribution at the heart of the piece, and the sexual nature of Mattie’s attraction to LeBoeuf also follows the novels lead.

True Grit is a vivid and potent western, and manages to hold in balance competing energies and concepts, complemented by the authoritative cinematography of Coen’s regular Roger Deakins. The supporting cast is uniformly fine, particularly Barry Pepper as the outlaw leader Ned, and Josh Brolin as the putative target. The Coens seem able to range across a variety of genres with equal aplomb, but with this stunning western one hopes they visit the currently out of favour genre many more times.

The Coens output post True Grit failed to keep up to their recent, rough level of a film each year, as they set their gaze upon the folk scene of Greenwich Village in the 1960’s with their 2013 release, Inside Llewyn Davis.  Musical legend T Bone Burnett, who guided the brilliant O Brother Where Art Thou soundtrack for the brothers, again collaborates in a marriage seemingly made in heaven. Can’t wait for that one. 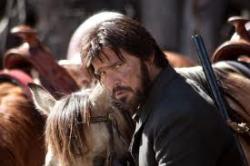 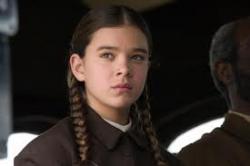 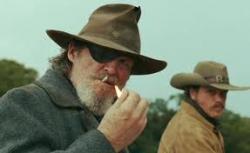 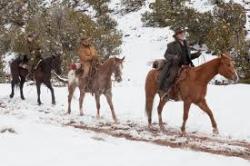 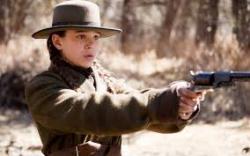 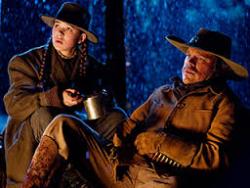 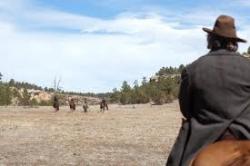