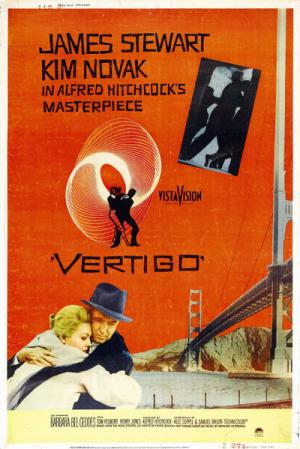 It’s no secret Hitchcock loved a blonde in the frame, had an Englishmen’s ability to fetishise sex and liked to add a layer of faux Freud when the opportunity arose. Vertigo sees Hitch at the top of his game in all areas. Jimmy Stewart is Scotty, a San Fran detective who found a nasty way to discover he had a fear of heights, which caused him an injury leading to his retirement. Scotty is an old fashioned guy who finds identity and worth in work, but is now at a loose end. We know he finds no such satisfaction with women as early on it’s clear he’s never found one to match his ideal. Hitchcock oversees the introduction of a woman for Scotty to obsess over, but with delicious irony emasculates Scotty in the process.

Kim Novak plays the blonde (Madeleine), the wife of an old school friend of Scotty’s. He’s asked to follow her and report back, as her husband believes she’s possessed by the spirit of a dead woman who died tragically 100 years before. Scotty is asked the key question ‘Do you think it’s possible for a living person to be possessed by the spirit of a dead person?‘. He is skeptical to say the least, but upon seeing her, it’s obsession at first sight and he agrees to take the job. In a sequence that highlights Bernard Hermann’s lovely score, Scotty follows Madeleine and starts to put the puzzle together. She does seem connected to the dead Carlotta in mysterious ways. Scotty foils a suicide attempt and gets up close and personal with Madeleine in his apartment. He starts to behave more like a suitor than a Jake on a job and the lines get really blurred when Madeleine reciprocates.

So far Hitchcock has served up Jimmy Stewart, Mr Every-niceguy-man in a way that has him abandoning his scruples, he is after all pursuing an adulterous affair, and rejecting the perfectly acceptable nice-girl option (Barbara Bel Geddes) who is left stewing in the background. How did he get away with it? and the best is yet to come. Scotty doesn’t abandon logic however much his heart is ruling his actions. He tells Madeleine that there’s a reason for everything if she’ll only look for it. He tells her she’s not mad, even though she fears she is as it runs in the blood from Carlotta, and she’s not possessed. Just as they declare eternal love for each other he loses her as she fulfils her spirit/blood ordained fate.

If this is not enough Hitchcock then proceeds to twist the knife. The shock of not solving the situation with reason and workcraft, Scotty’s tools of trade and identity shake his world to the core. He retreats into his shell, not sure of his laws of certainty anymore. He’s awoken from his trance, by a chance encounter with Madeleine’s double, Judy. The obsession starts again and Scotty re-fashions Judy in the process, until she is the reincarnation of his Madeleine. Hitch continues to neuter Scotty, showing him dressing her like a doll, making her change her hair colour, ‘it can’t matter to you’! he yells at her, a brave statement indeed! This is the payoff, as Judy emerges from a shimmering green haze as Madeleine Scotty sees that the dead can inhabit the soul of the living. Reality comes thudding back, just as the happy couple seem set for lasting bliss. Picking up a clue a 10 year old would spot the penny drops, and Scotty takes Judy to the place of Madeleines death to shake a confession out of her. Scotty watches impotently once again, as the godess/ideal takes on the last aspect of Madeleines spirit and follows her path to the graveyard.

A bold ending and jolt to the viewer. Hitch has taken a stock character, and shown him his skill is useless when it comes up against the beauty and mystery of love and deceit. Scotty watches as Judy is possessed by the real Madeleine, the one he forced upon her with his obsession. He can’t solve the puzzle by logic, it’s solved for the viewer by a flashback and for him by the big obvious neckless clue. He can’t possess the godess, he can’t drag her into his world and he can’t be a part of hers. A beautiful film to look at, and an intriguing one to dissect. Would it have been a better film if the audience wasn’t in on the reveal, if Scotty solved it for us at the end like a traditional detective thriller? Maybe that would have been too easy for Hitchcock, who ends up subtlely subverting the genre by making the film we have. Poor Jimmy, cured of his vertigo but left emasculated and helpess at the top of a phallic tower…Freud would have a field day….and that’s even before Hitch got to Mr Bates and his knife! 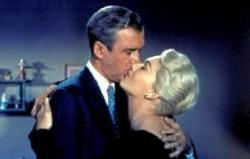 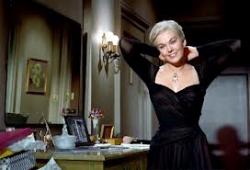