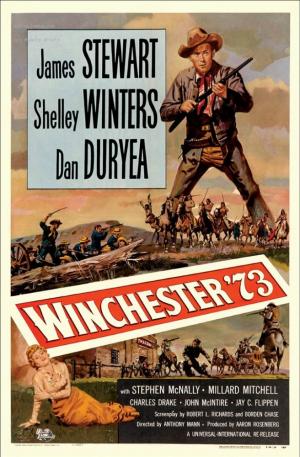 Son of a gun

The first of a run of 5 outstanding westerns Anthony Mann made with star James Stewart, this one is the only one in stark black and white, and in many ways it suits the sombre revenge-chase scenario better than the technicolour option.  The cinematographer was the brilliant Billy Daniels. a silent era  veteran who shot everything from Garbo's classics to Dassin's muscular late '40's noir's to 'Valley of the Dolls' in the '60's.  The story was written by Borden Chase, who also wrote the seminal Hawk's western 'Red River' two years earlier. Interestingly 'Winchester '73' was a property Fritz Lang and Walter Wanger were developing with their short lived Diana Pictures, a company they formed with Wanger's wife Joan Bennett, but after the problems with 'Scarlet Street', Lang's brilliant film noir, it foundered and was absorbed by Diana's distribution partner, Universal.

Lin (Jimmy Stewart) and Hi Spade (Millard Mitchell) ride into a raw and rough Dodge City only to have their guns confiscated by Wyatt Earp (Will Geer). It's obvious they are searching for someone and when Lin sees there is a shooting contest to be held with the prize of a Winchester '73, one of the most sought after rifles in the west, he knows it will flush his quarry out. Lin bumps into his man, 'Dutch' Henry (Stephen McNally) in the saloon, each reaching instinctively for the guns they don't have, and Earp knows he has trouble on his hands. Mann stages his street scenes brilliantly, they are lively and authentic, and it's here where the contest is held and Lin and Dutch become the final two competitors. Lin wins the final shootout and is presented with the gun. Dutch and his henchman jump Lin at the hotel and make off with the gun, and Lin and Hi Spade head off once more in pursuit.

The gun soon becomes the symbol of the chase, and the devise that keeps us on the trail, as Dutch needs to trade it for several guns to protect him and his men against possible Indian attack in the territory. The gun runner that Dutch loses it to is himself killed by a rogue Indian Chief (Rock Hudson), and soon that Chief is attacking a small cavalry detachment containing Lin and Hi Spade, and also Lola (Shelley Winters), a saloon girl run out of Dodge by Earp, and her cowardly boyfriend Steve. Lola and Lin share a connection at the camp, and a romance is on the cards. Dutch has set off to join his criminal colleague 'Waco' Johnny (Dan Duryea), and soon Steve takes Lola to a deal he's also making with Waco, leading to Lola being kidnapped by Waco and Steve being killed. Waco and Dutch plan a bank job in the town that Lin and Hi Spade have also come to, and it's there than Lin finally gets to find Dutch again, who now has the Winchester back. Lin and Dutch ride to a remote rocky outcrop and have the final shootout. Lin has won the rifle a second time in a shootout for higher stakes.

The film works beautifully as a western update of the Cain and Abel myth. Stewart was concerned that he was getting typecast as a genial family man, and cannily sought parts with edge and depth to display a range that could carry him through middle age and into character parts. 'Winchester '73' succeeded admirably in this regard, as Lin is a driven and complex character, bent on dark revenge. Family viewing this was not, and Stewart was well matched by Stephen McNally's oily Dutch and the borderline psycho Waco as rendered by the wonderful and under-rated Dan Duryea. Millard Mitchell is solid as the steadfast partner who anchors Lin's obsessive side, and he would pop up again as the grizzled prospector in Mann's 'The Naked Spur'. Shelley Winters is as reliable and effective as ever, but as with most westerns it's a guys flick, and it's a nice surprise to see Tony Curtis in a small role as a cavalry soldier, then at the start of his career.

The Indians are represented as fighting for their land, without the breathless 'savages' commentary and demonisation that besmirched an earlier generation of western films. The decade would continue to see a more dimensional portrayal of the Indian issue until the wheel turned full circle by the early '70's revisionist westerns. The Indians are just one of a number of difficulties that the frontier environment represented, and are not dwelt upon in any other way. As one of a growing trend to 'psychological' westerns, along with Mann's own 'The Furies' and King's 'The Gunfighter', 'Winchester '73' speaks eloquently of a man in a moral conundrum and asking himself 'what happens when the hunt is over'? These stories were a way for a post war audience to address issues of identity and meaning in ways that were not overt, allowing for allegory and metaphor, much like the film noir cycle, but in a less obvious way. Mann continued to make smart westerns through the '50's, achieving true art with 'The Furies' and great dimension with his Gary Cooper vehicle 'Man of the West' a few years later. 'Winchester '73' stands there with the best of them. 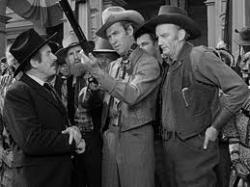 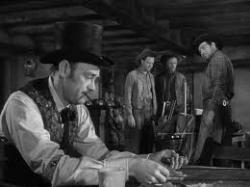 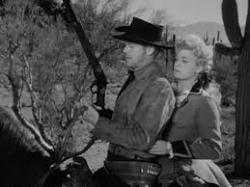 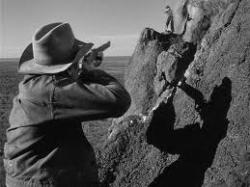 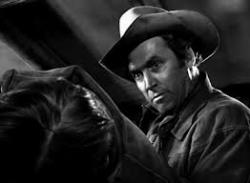