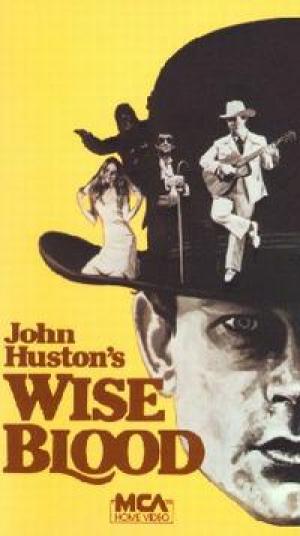 "To 'choose' dogma and faith over doubt and experience is to throw out the ripening vintage and to reach greedily for the Kool-Aid."
~ Christopher Hitchens

It seems odd to ponder now, but with his late period film Wise Blood, John Huston may have inadvertently made the film he thought he’d failed to make after all. A lifelong atheist, he thought he was making an anti-religion film, but became convinced by others it was not. This came about from different interpretations the material enjoyed from Huston’s own, specifically the Fitzgerald brothers who wrote the screenplay and Brad Dourif who played Hazel Motes, the main character.

To backtrack a little….Flannery O’Conner was a devout Catholic and wrote the book as a kind of satire on the Baptist/Evangelical type of Christian belief prominent in (mostly Southern) parts of the USA. The broadness of the humour and the grotesque dimensions of the characters leave little doubt that she found that style of belief inferior to her own conservative brand of Christianity. She was a long time family friend of the Fitzgeralds, also devout Catholics, who became executors of her literary estate after her untimely passing at a relatively young age due to the effects of an auto-immune virus called lupus. The Fitzgerald clan acted as writers and producers to bring the film to the screen, engaging John Huston as director.

For those that view life through the faith prism, the view that Hazel is on a journey towards accepting God is an obvious one. The beauty of the idea of ‘Jesus’, is that it trumps any competing reality in the mind of believers, so that a person who is for all intents and purposes rejecting Jesus, is in fact, paradoxically, embracing him. This is what we have in Hazel Motes. We first meet Hazel on his return home. He is an intense young man, arriving at the family home dressed in army greens, to find it abandoned, derelict and in disrepair. The gravestones in the family plot seem to suggest his family is all gone and so he leaves for the big city.  The spelling of angel (angle) on the gravestone and Hazel’s own attempt to write a note for would be thieves, threatening death if they steal his furniture, makes it clear we’re dealing with an uneducated hillbilly. Set in Georgia and with Alex North’s very kitsch rendering of Tennessee Waltz as background music, it’s plain we’re on a comic odyssey. Or are we?

Hazel, bedecked perhaps subconsciously in quasi-preacher garb, arrives in Macon, determined to do some things that would not be approved of by a good Baptist family. In other words the chains are off. In flashback we see his experience with his grandfather, a tent show Evangelist preacher (Huston himself) and we see the perverted relationship between religion and sex that’s established in his mind as a boy. Loudly proclaiming his belief in nothing, he finds digs with the local prostitute (unnervingly played by a real local prostitute!) and picks up a stray friendless soul called Enoch Emory (Dan Shor). Hazel sets eyes on Sabbath Lily (Amy Wright), the daughter of blind preacher Asa Hawks (Harry Dean Stanton). She takes a fancy to Hazel, but he proclaims their ministry (like Asa’s blindness) a sham, and that he will set up a true church, the Church Of Christ Without Christ.

Hazel tracks down the preacher and his daughter to a boarding house and takes a room there. He buys a car, heavily investing his emotions in it as it serves as a metaphor for the ‘truth’ he’s proclaiming. It’s a good car (despite appearances) and getting it to work is merely a matter of will. It can therefore take him anywhere he wants to go. A series of incidents leads to Hazel consummating his relationship with Sabbath, but it’s a relationship of the lowly flesh and can’t last. Hazel is conflicted by what he is trying to reconcile, the Christian idea of a clean spiritual life as against an earthly life of the sins of mammon.

Hazel finds his idea stolen by a rival preacher (Ned Beatty) and kills the imposter Hazel he uses (William Hickey) to help fleece the crowds. In this way he has actually killed a version of himself. The car also meets a symbolic death at the hands of the law. The intensity of Hazel’s guilt, stock in trade for Catholics, leads him to mutilate himself in the manner of a medieval monk, and actually blind himself, a la Oedipus. Asa and Sabbath leave town. Hazel eventually resigns himself to staying in the boarding house under the watchful care the landlady.

On the surface Wise Blood is a comedy/satire, but at its heart it’s a conservative Catholics declaration of the power of her version of God. It is written by an adherant of one sect of Christianity, pouring scorn and derison on another. This of course is nothing new. Christians have been at each others throats since the Gnostic heresies of the second century. And of course nobody expects the Spanish Inquisition! The device of setting up a Church of Christ without Christ is exactly how Evangelicals view Papists. Catholic dogma may dilute ‘Jesus’ into a trinity, a doctrine constructed to get around Biblical strictures about having more than one god, and endows an infallibility on the Pope in matters of faith that is hardly accepted by other Christian sects. A healthy slab of Evangelicals not only don’t believe in the authority of the Pope as did O’Connor, they believe him to be Satan’s representative.

From an atheists (Hustons) point of view, this is rich material for satire. If you believe that God’s power is a figment of man’s imagination then the film is about the madness of belief. Huston thought that this was the film he was making, but as Hazel took on the suffering and trappings of an initiate ( a la Jesus) the Fitzgeralds and Dourif convinced him this was Hazel’s way to find God. Huston famously relented saying merely "Jesus wins."

Wise Blood  exposes the empty sham of faith better than most others. It lays bare the scam, sold by snake oil preachers to the emotionally vulnerable, where Jesus is just another product to compete with in the marketplace. What better product to sell than one that can’t be seen, and with rewards to be collected after you die?! Brilliant and un-falsifiable. People are exploited by a cultural programming that encourages making an emotional rather than intellectual decision to believe in Jesus, the invisible sky wizard of love, tacitly and overtly supported by a church intertwined with secular institutions and stitched into the fabric of everyday life.

The film actually exposes the damage religion does by proclaiming a divide between our natural urges and the limits and judgements an unseen, celestial dictator would put on them, and the punishments prescribed for failing to conform. Flannery O’Connor would not have written a book in this light, but the unintended consequence of the resultant film is just that.

Huston's unerring feel for storytelling is , of course, at centre stage, and Brad Dourif is peerless as the wild-eyed Hazel, a role that remains his best. Ned Beatty and Harry Dean Stanton deliver their usual first class support work. Huston made a few more essential films in his old age, particularly Prizzi's Honour  and The Dead,   but few as fine as this late career, single digit salute to Jesus. 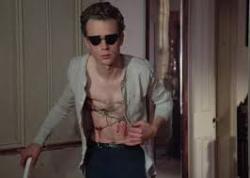 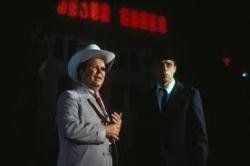 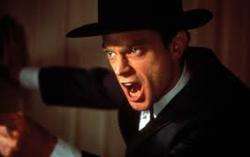