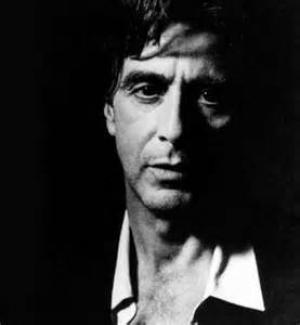 The Method - The Next Generation

"My weaknesses... I wish I could come up with something. I'd probably have the same pause if you asked me what my strengths are. Maybe they're the same thing."
~ Al Pacino

Alongside Robert De Niro, Al Pacino is the obvious candidate for most worthy successor to Marlon Brando’s undisputed heavyweight champion acting crown. Like Brando, and De Niro, the Manhattan born Al studied with Lee Strasberg at the New York based Actors Studio, and it was his early stage work that brought him to the attention of film producers. After a fine lead role in the gritty and very much of-its-time The Panic In Needle Park,  Pacino got past Jack Nicholson, Warren Beatty and Ryan O’Neal, et al. and some wary producers, to be cast as Michael Corleone in the troubled production of Francis Ford Coppola’s The Godfather,  and stardom was his.

Al Pacino then embarked on a run of roles that dominated the decade and led to him being one of the premier actors of the much vaunted New Hollywood, the interesting and edgy films of the American Renaissance. He followed Coppola’s epic with the smaller two-hander (with Gene Hackman) in Scarecrow,  two fine productions for Sidney Lumet with Serpico  and Dog Day Afternoon,  and those two films were split by Coppola’s brilliant The Godfather II, which garnered even more acclaim than the original. Pacino finished the decade with a turgid racing driver piece for Sydney Pollack, Bobby Deerfield,  but recovered somewhat with the help of director Norman Jewison and screenwriter Barry Levinson, in …And Justice for All.

Pacino slowed down a little in the ‘80s, balancing his film work with stage roles, and only made a handful of films, amongst them the worthy thriller Sea of Love, and one of his signature roles, the egregious Tony Montana in the super-charged Brian De Palma crime epic Scarface.  In 1990 he returned to the role of Michael Corleone for Coppola’s final instalment, and inevitably perhaps, inferior The Godfather III,  and took the heavily made up part of Big Boy Caprice for Warren Beatty’s comic book oddity Dick Tracy.

The ‘90s saw Pacino up the ante to roughly one film a year, and as some quality roles came his way he built up his filmic legacy significantly. He memorably essayed the Broadway hit role of Ricky Roma in David Mamet’s superb, Glengarry Glen Ross,  and finally won the Best Actor Oscar after 5 nominations for his blind military officer in the otherwise overwrought Scent of a Woman.  Two fine crime films, De Palma’s Carlito’s Way  and Mike Newell’s excellent Donny Brasco  were two highlights as was the superb policier from Michael Mann, Heat,  where Al got to finally share screen time with old friend and rival Robert De Niro. Mann supplied another A-grade role for Al in The Insider,  opposite Russell Crowe, and Oliver Stone did the same for his, On Any Sunday,  in 1999.

In the new millennium Pacino has been as busy, but the quality of the roles had markedly dropped off. Some exceptions would have been the remarkable Insomnia,  from Christopher Nolan, where Pacino plays a detective caught between a past that is catching up with him, and a murderer who knows too much.  Pacino’s love of the stage again came to the fore as a certain Mr. Shakespeare supplied him a fine late career role with Shylock, in The Merchant of Venice.  TV supplied Pacino’s best late career roles with the Barry Levinson directed You Don’t Know Jack,  and HBO’s brilliant David Mamet essay on fame and celebrity trials, Phil Spector.

Despite the unevenness of his film career, the power and nuance that Pacino has consistently delivered marks him as one of the finest actors of his generation, and his work alone as the conflicted Mafioso Michael Corleone stands as an indelible achievement. Pacino always maintained a curiosity and a searching eye in order to avoid repetition, and his best films bristle with intelligence, verve and style. He has managed to mark each decade with a couple of brilliant films at least, and his ebullient and considered turn as Phil Spector in 2012 shows he is still a force to be reckoned with.

"I asked God for a bike, but I know God doesn't work that way. So I stole a bike and asked for forgiveness."
~ Al Pacino