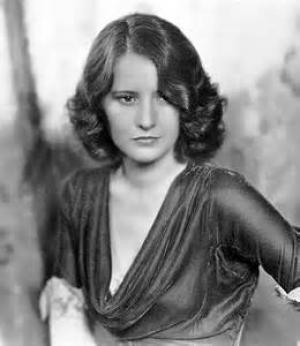 "Eyes are the greatest tool in film. Mr. Capra taught me that. Sure, it's nice to say very good dialogue, if you can get it. But great movie acting - watch the eyes!"
~ Barbara Stanwyck

Of all of the great women of the classic era of Hollywood Barbara Stanwyck seems the oddest fit and the hardest to pigeon-hole. Possibly not the most glamorous (Marlene Dietrich) or the most mysterious (Greta Garbo) or the ballsiest (Joan Crawford) or the most intelligent (Bette Davis) or the girl next door (Jean Arthur), in truth she embodied all of these qualities. Born Ruby Stevens in Brooklyn, after a turbulent childhood she got into show business as a chorus girl in the Ziegfeld Follies on Broadway.  She broke into films just as the talkies were getting started and worked her backside off to rise to lead roles by as early as 2 years into her career after being spotted by the up and coming director Frank Capra.

Capra cast her in Ladies of Leisure  in 1930 and William Wellman in Night Nurse  opposite Clark Gable the next year, as her star really took off. Capra fell in love with her and gave her two significant roles in The Miracle Woman  and in the remarkable  The Bitter Tea of General Yen,  where he seemed intent of turning her into Dietrich against his Von Sternberg. The film, possibly Capra’s finest, opened the remarkable Radio City Music Hall in New York in 1933, but its exotic spice was not widely to taste.

Stanwyck worked hard in a string of films of varying quality, but shining for good directors like George Stevens in the western Annie Oakley  in 1935, and in The Plough and the Stars  for John Ford in 1937 (another director who fell in love with her). She won a Best Actress nomination for her role, her personal favourite, in King Vidor’s shamelessly sentimental Stella Dallas  and worked with silent giant Cecil B. DeMille in the sprawling western Union Pacific. She promoted the career of William Holden by co-starring in Golden Boy  and saved him from being fired and then made Remember The Night  for writer Preston Sturges with Fred MacMurray as her co-star.

If the 30’s had been good for Stanwyck then the ‘40s were fabulous, and she produced a body of work in that decade the envy of any actress. Preston Sturges promptly signed her for his second film as writer-director, the masterpiece The Lady Eve  opposite Henry Fonda. As if to emphasise her versatility her old flame Frank Capra gave her one of her finest dramatic roles in Meet John Doe   opposite Gary Cooper, before she turned in one of the great screwball performances in the Billy Wilder penned and Howard Hawks directed Ball of Fire.  Wilder took his lead from Preston Sturges and moved into directing, and offered Stanwyck and Fred MacMurray a chance to re-team in his seminal noir Double Indemnity,  casting both (reluctantly) against type in what is one of the great films of all time.

Barbara Stanwyck stayed as busy as usual for the remainder of the decade but came into a fertile phase with some darker themed noir thrillers, like The Strange Love of Martha Ivers  and Sorry, Wrong Number.  She also gave superb performances for Anthony Mann in the brooding psychological western The Furies  and for Fritz Lang in the stark, Clash by Night opposite Robert Ryan and Marilyn Monroe. She continued to work consistently, always worth watching and never less than prepared in fine roles in Executive Suite  and Forty Guns  for maverick director Sam Fuller, but good roles for older women were becoming scarce.

She closed her career in a series of extremely popular TV series like The Big Valley, and always enjoyed the love and respect of her peers. A self-made and single minded woman, she had no time for collectivist solutions and politically lined up with the right wing cliques run by John Wayne, De Mille and Ward Bond. Her tough edged pragmatism shines through in many of her finest roles and it was a tribute to her skill and artistry that she could play comedy and drama with equal effect. She was tough and tender and honest, never condescending and always believable - not bad for an old Brooklyn flapper! She could do ‘sex’ and she could do sentimental and earnest, she was the ultimate pro and a hell of a dame who created some of the most compelling characters in some of the great films of the golden age of Hollywood.