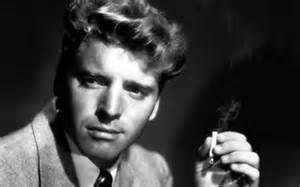 “I woke up one day a star. It was terrifying. Then I worked hard toward becoming a good actor.”
~ Burt Lancaster

An athletic youth, the Manhattan born Burton Lancaster teamed up with Nick Cravat to form a circus acrobatic act as a youngster before joining the US Army, serving in Italy for 2 years during WWII. After returning to New York he fell into acting and soon found parts on Broadway to suit his brooding good looks and athletic physique, and in short order Hollywood came knocking. Burt had the good luck to be cast in the loose adaptation of Ernest Hemingway short story The Killers,  superbly directed by German émigré Robert Siodmak, and its dark themed muscularity made him a star overnight. Siodmak, who helped define the parameters of Film Noir  in league with his friend Billy Wilder and fellow German Fritz Lang, was employed by producer Mark Hellinger, a famous Broadway columnist, who recognised a star when he saw one.

Hellinger used John Huston and Richard Brooks to write The Killers  screenplay and again pressed brooks into service for the gritty follow up, Brute Force, a sensational prison break film directed by Jules Dassin. Lancaster lost his early mentor when Hellinger died suddenly (and Humphrey Bogart lost his new production partner) but the experience taught Lancaster the need to have input and control into film production. After a couple of excellent Noir’s, like Sorry, Wrong Number, opposite Barbara Stanwyck, and Criss Cross  (again directed by Siodmak), Lancaster made a series of unremarkable programmers, including some fun pirate romps with old friend Nick Cravat, before he marked his territory as a serious A-list presence with Fred Zinneman's From Here To Eternity.

Lancaster steadily built his career through the staid Eisenhower era until he was amongst the biggest stars in the world, able to produce the films he wanted via his successful company Hecht-Hill-Lancaster. A string of hits like Apache  and Vera Cruz, (both directed by Robert Aldrich), Trapeze  for Carol Reed and Gunfight at the OK Corral  for John Sturges, with friend and rival Kirk Douglas on board, let Lancaster have the best of both worlds; commercial success and fine roles with top directors. Another indicator of his esteem and range was his role in a Tennessee Williams play, The Rose Tattoo,  opposite Italian spitfire Anna Magnani, and his sharing the billing with legendary actor Clark Gable in the fine Robert Wise war film, Run Silent, Run Deep.  He capped the decade with the best performance of his career, reuniting with Trapeze  co-star Tony Curtis for the remarkable The Sweet Smell of Success, and then by winning a Best Actor Oscar for Elmer Gantry.

“Most people seem to think I'm the kind of guy who shaves with a blowtorch. Actually I'm bookish and worrisome.”
~ Burt Lancaster

Lancaster showed no signs of slowing through the 1960’s, balancing serious plays with entertaining ‘actioners’ (mostly westerns) and dipping his toe in political films, with Judgement at Nuremberg  and the urgent John Frankenheimer directed, Seven Days in May.  He again received wide acclaim for the unusual role of Robert Stroud in The Birdman of Alcatraz and made an international splash by starring for Visconti in the very fine period drama The Leopard.  Burt scored another hit with Frankenheimer and the big budget WWII piece, The Train,  and showed his reach and ambition by providing an unforgettable characterisation in Frank Perry’s bleak and artsy, The Swimmer.

Lancaster was a committed liberal, and with Brando and others supported the Civil Rights struggle through the Kennedy era, and in 1973 he starred in the Dalton Trumo penned, conspiracy theory based, Executive Suite,  with Robert Ryan, examining the Kennedy assassination. In the late ‘70s he also turned his attention to the Vietnam War, before it was fashionable to do so, in Aldrich’s Twilight’s Last Gleaming,  and in Go Tell the Spartans,  a bleak and sombre estimation of the futility of American involvement, unfortunately lost in the hype surrounding that years other Vietnam films, Coming Home  and The Deer Hunter.

His last great role was undoubtedly the brilliant and elegiac Atlantic City,  superbly directed by Louis Malle, where Lancaster plays an ageing petty criminal who hits the jackpot. He plays opposite Susan Sarandon, his broken down wanne-be mobster is tender and believable as a man who yearns to have been someone, to have meant something to someone, looking back only to see his best years have been wasted. In the twilight of a stellar career he added a number of fine roles to his legacy with the quirky, Local Hero,  where he plays an eccentric Texas oil man and with the lovely metaphorical Field of Dreams,  where he plays the ageing Doctor who could have been a baseball star.

Burt Lancaster arrived just prior to the Method avalanche that followed the Brando and Clift revolution post WWII, and truthfully, his presence seemed to hark back to golden era stars like Cooper and Gable. Somehow he managed to ride this new wave and turn his dazzling smile and athletic prowess into a persona the public accepted as much as his more critically acclaimed peers. In fact, he was able to develop a knack that enabled him to switch between entertainment and art, something most modern actors like Clooney of Gosling do as a matter of course, but something unusual in Burt’s glory days.

Lancaster was able to exude an innate intelligence as well as brute physicality to bring to his craft, and as an actor he knew the value of stillness as a telling counterpoint to relentless flailing around. His curiosity as an artist ad as an actor led him to take chances that many of his peers did not, and it facilitated his journey from All American boy to serious artist and producer, allowing him to opt for villainous roles with meat, rather than settle on an endless succession of one dimensional hero parts. Burt Lancaster was demanding and driven, difficult to work with but his performances and commitment to every role he signed up to was never in doubt.