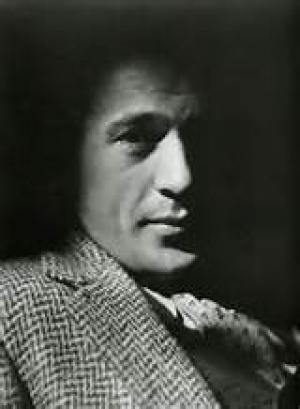 "This fellow is the world's greatest actor. He does without effort what the rest of us spend our lives trying to learn—namely, to be natural."
~ John Barrymore

Somewhere between the good natured machismo of John Wayne and the ‘everyman’ bonhomie of Jimmy Stewart you find Frank (Gary) Cooper, and in both cases the lanky cowboy from Montana was there first. Cooper’s ability with horses and athletic good looks took him to Hollywood a couple of years before the coming of sound, where he graduated from extra parts and stunt work to featured player status. By 1928 he had become a successful leading man, making the transition from silent to sound with the help of actress Clara Bow, an early champion of the gangly actor. Paramount signed Cooper to a contract an promoted his career by giving him a significant role in the Bow vehicle Wings,  the first picture to win an Oscar for Best Picture, directed by maverick former flyer William A. Wellman.

Cooper’s cowboy credentials made him a natural for westerns and the first significant hit was Victor Fleming’s The Virginian in 1929, with Walter Huston, and it sent the tone for much of the actor’s early successes. Cooper worked in a succession of action films, westerns and war films, until he came to notice in the remarkable Morocco,  Josef Von Sternberg’s first American film with Marlene Dietrich. On the cusp of super-stardom, an exhausted and ill Cooper took the radical move of leaving Hollywood for the best part of a year on a sabbatical to Europe, taking the opportunity to embrace art and culture and returned to Los Angeles with a new contract that gave him more money, as well as script and director approval. Cooper made a success of A Farewell to Arms with Frank Borzage directing, and also made a life-long friendship with its author, Ernest Hemingway into the bargain. He also made an enduring association with cinema giant Cecil B. DeMille with The Plainsman,  and worked again with the director in the next decade.

Now a bona fide A-list actor, Cooper settled into a string of iconic roles, across a variety of forms and with the best directors and writers of the day. Not particularly noted for his versatility, Cooper put paid to that notion with the best of his 1930’s output, i.e, Ernst Lubitsch’s Design for Living,  with Cooper playing opposite Miriam Hopkins and Frederic March in the Noel Coward play, and Henry Hathaway’s stylish actioner The Lives of a Bengal Lancer.  Other notable films from the decade were Desire,  his re-teaming with Dietrich, again under Frank Borzage’s steady eye, and another Lubitsch property, the witty Bluebeard’s Eighth Wife,  opposite Claudette Colbert from a script by Charles Brackett and Billy Wilder. Bill Wellman provided him one of the great action roles of the decade in the classic, Beau Geste,  the definitive of the many filmed versions of the classic novel.

Cooper had a great appreciation of the importance of good directors, and his key associations from this period underline the fact, with Howard Hawks and Frank Capra both moving into the frame. He worked later in the decade for the first time with William Wyler in one of his best western roles, in The Westerner  with Walter Brennan. Noted liberal writer Robert Riskin provided the basis of his triumph’s for the more reactionary Capra, with Mr Deeds Goes to Town  and Meet John Doe  amongst the all time classics from the era. Hawk’s cast him in his friend William Faulkner’s scripted Today We Live,  with Joan Crawford and was first to team Barbara Stanwyck with Cooper, in the Billy Wilder script, Ball of Fire,  which demonstrated just how much lightness of touch in comedy the actor had learned from Lubistch.  Hawks also gave him the role that delivered him an Oscar for Best Actor, presented to him by his great friend Jimmy Stewart, Alvin York in the timely war drama Sergeant York.

Unlike Stewart, Cooper was too old to sign up for active service during the war and cut his screen output to tour Army bases in the Pacific, often performing the key Lou Gehrig speech from his Sam Wood hit Pride of the Yankees,  to inspire the troops. Wood teamed with Cooper on several hit films, notably on the Hemingway adaptation, For Whom the Bell Tolls,  opposite a luminous Ingrid Bergman, and again with the romantic comedy, Casanova Brown.  Silent era veteran and right wing nut-job Cecil B. DeMille worked many times with Cooper, and made The Story of Dr Wassell  and Unconquered,  together, during the early 1940’s and became political allies after the war as founder members of the egregious Motion Picture Alliance for the Preservation of American Ideals. Cooper also made the uneven, The Fountainhead,  based on iconoclast Ayn Rand’s putrid, rambling philosophies, a role she criticised years later even though she requested he be cast in the film. Rand also wrote a notorious pamphlet for The Alliance at the height of the communist witch hunts, naming ‘suspect’ films like Wyler’s superb and humane, The Best Years of Our Lives.

Like many actors Cooper struggled to find the right roles after the war as the type of moves and the type of actors the public were embracing were changing with Method actors like Marlon Brando and Montgomery Clift coming to prominence. Cooper worked with Fritz Lang on the moody spy thriller Cloak and Dagger,  opposite the lovely Lilli Palmer, and ironically would be mouthing words from two screenwriters who became notorious as members of the Hollywood Ten, Ring Lardner Jr and Albert Mantz. Cooper appeared before HUAC to denounce so-called communist influence in Hollywood and would (unwittingly perhaps) again work with a blacklisted writer, in Carl Foreman, on one of the triumphs of his latter career, the iconic High Noon.

Gary Cooper moved into the final decade of his career as a much in demand mature actor, able to hold his own with the much vaunted method actors by being a beacon of naturalness himself, something he’d done his whole career. Lee Strasberg once commented, "The simplest examples of Stanislavsky's ideas are actors such as Gary Cooper, John Wayne, and Spencer Tracy. They try not to act but to be themselves, to respond or react. They refuse to say or do anything they feel not to be consonant with their own characters."  Cooper made a string of excellent westerns during this period, his mature presence and style adding a new depth to the genre in Springfield Rifle  and Vera Cruz,  and particularly in Anthony Mann’s masterful Man of The West,  opposite a riveting Lee J. Cobb. Cooper crowned his career with some fine work in William Wyler’s Friendly Persuasion  and in Delmer Daves’ downbeat The Hanging Tree.. Billy Wilder tried to repeat their old magic but effectively  miscast him opposite Audrey Hepburn in his December-May romance Love In The Afternoon.

Gary Cooper died just short of his 60th birthday, an American giant gone too soon. He embodied the kind of good spirited, open heartedness of the best of humanity and found he was able to project that quality in many of his films. It is a testament to his artistry and the subtlety of his screen acting that many directors thought his live takes were lacking, but when they viewed the daily rushes they quickly changed their minds. Sam Wood, who directed him in several roles said, “What I thought was underplaying turned out to be just the right approach. On the screen he's perfect, yet on the set you'd swear it's the worst job of acting in the history of motion pictures.”  There exists something of a paradox in the character of Cooper, something that made him perfect for Riskin’s John Doe character. He was a humane and caring man, yet aligned himself with hardline right wingers like John Wayne and Walt Disney, he was a symbol of respectability and decency and yet he had affairs with many of his leading ladies, including Grace Kelly, Dietrich and Patricia Neal. Maybe what made Cooper so believable was that he lived a full and rich life, one of nuance and depth, and these things gave him a particular insight into the human experience, allowing him to create characters that will survive as long as humans feel the urge to look back on those timeless, shimmering images.