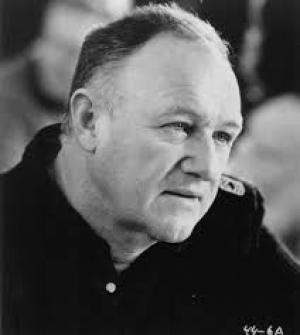 Gene Hackman is an American treasure, an actor’s actor who rose from character/support roles to stardom on the back of hard work, good judgement and great taste. Hackman was a military vet who served in China in that late 1940’s before he fell in love with the theatre in his native California in the mid 1950’s, befriending fellow hopeful Dustin Hoffman. The pair moved to New York and together with good friend and roommate Robert Duvall, they studied acting and worked in small productions. Hackman got his break in a play called Any Wednesday, with Sandy Dennis and was soon working in films, notably Robert Rossen’s Lilith, starring Warren Beatty. In 1967 Beatty was to be pivotal in Hackman’s career when as a producer/actor he cast him in the mega-hit and game changer, Bonnie and Clyde, directed by Arthur Penn. Gene played Clyde’s brother Buck Barrow, and his memorable characterisation saw him nominated for an Oscar as Best Supporting Actor. The affable Hackman never looked back.

A series of mixed quality projects beckoned with more supports in 1968 before better roles with A-list directors started to appear regularly in 1969 -  in the astronaut pic Marooned for John Sturges, The Gypsy Moths for John Frankenheimer and Downhill Racer for Michael Ritchie. Another Best Supporting Actor Oscar nomination came his way for the worthy adaptation of the stage play, I Never Sang for my Father, opposite veteran Melyn Douglas in 1970 before Hackman graduated to leading roles in quality projects. William Friedkin cast him as Popeye Doyle in his masterful cops and robbers film, The French Connection, a role that won Hackman a best actor Oscar and a career as a leading man. Suddenly he was sharing the billing with Lee Marvin in Prime Cut, with Al Pacino in Scarecrow and won the lead for Francis Ford Coppola in the masterpiece The Conversation, a small film Coppola sandwiched between his two Godfather epics, and one of Hackman’s best roles.

Gene Hackman now had the pick of the stall, and his slightly askew screen persona, which was not the square jawed hero cliche proved ideal for the new style American Renaissance of the 1970’s as it allowed him to roam between quirky cult pieces like Cisco Pike and blockbuster mainstream confections like The Poseidon Adventure and the Superman franchise. He could work for quality directors like Arthur Penn (Night Moves), Stanley Kramer (The Domino Principle) Stanley Donen (Lucky Lady) or for relative unknown’s like Jan Troell in Zandy’s Bride or Dick Richards in the foreign legion piece, March or Die. He made a sweet impression as a blind hermit in Mel Brooks' Young Frankenstein, reminding everyone of his comic prowess. After the huge popcorn hits of Superman and Superman II, where Gene played super-villian Lex Luthor, he worked for Warren Beatty again in the under-rated Reds before settling into a series of modest mainstream films through the 1980’s. Hidden amongst the mainstream clutter were interesting turns for Arthur Penn (again) in Targets, for Nic Roeg in Eureka, Sidney Lumet in Power and even for Woody Allen in the downbeat and serious Another Woman. British stalwart Alan Parker cast him in the superb civil rights era drama Mississippi Burning, and in a stellar cast Hackman was again singled out for most of the relevant award nominations during award season.

As the 1990’s got under way, veteran Clint Eastwood cast Hackman in his western masterpiece Unforgiven, and Gene won his second Oscar, this time for Best Supporting Actor, and he proceeded to pepper the decade with solid performances in mainstream films, notable amongst them The Firm, for Sydney Pollack, Twilight for Bonnie and Clyde writer turned director Robert Benton, and in two classy action films for Tony Scott, Crimson Tide and Enemy of The State, the latter a kind of modern update on The Conversation.  Get Shorty was a popular and quality hit in the mid 90’s and Eastwood again employed Gene’s talents to good measure in Absolute Power in 1997. In the new century Hackman was still active and David Mamet gave him a great role in the very entertaining crime film Heist in 2001 before Gene scored one of his best roles as the patriarch of an over-achieving if dysfunctional family in Wes Anderson’s superb, The Royal Tenenbaum’s. The role was praised and awarded Best Actor by the Golden Globes,The  Chicago Society of Film Critics and by The National Society of Film Critics. Gene Hackman retired form acting in 2004 and just prior he finally starred in a film with his old friend Dustin Hoffman, the entertaining 2003 John Grisham legal drama, Runaway Jury.

Gene Hackman, not blessed with 'movie star' good looks, created a roster of characters to rank with any at the very top of American cinema. Hackman was a consummate professional, never showy or over-reaching, always finding a beating heart within even his troubled characters. He was a super reliable performer, as capable in drama as comedy and his nose for a good part meant he was always worth watching, and like few others (maybe Walter Matthau) he never stepped on other actors, hit a false note or let ego get in the way.  He retired from acting in 2004 to concentrate on writing but he'd left an indelible mark on American cinema.