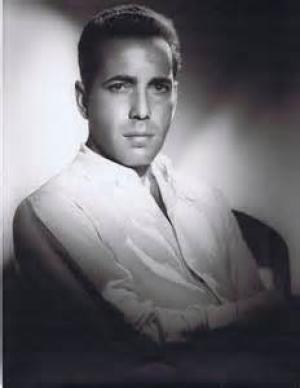 The stuff that dreams are made of

“Acting is like sex: you either do it, and don't talk about it, or you talk about it and don't do it. That's why I'm always suspicious of people who talk too much about either.” ~ Humphrey Bogart

Bogart used to proudly state that he was a “last century man”,  born in 1899, but he could not have known that he would become a man for the ages via his silver screen immortality. Cinema was barely starting when Bogart was born but it was enjoying its first golden age in the silent era when the young actor trod the boards on Broadway during the 1920’s. It was his success there in the part of Duke Mantee in the play The Petrified Forest  that led to a successful film career at the late age of 36. Bogart had been in bit parts for nearly 10 years in film when Leslie Howard, the star of the play insisted that Bogart repeat his role of the villain on screen and Warner Brothers duly signed him to a standard 7 year contract. Bogart never forgot the gesture and eventually named the daughter he had with Lauren Bacall, Leslie, in Howard's honour.

Warner Brothers failed to capitalise on Bogart’s success with Duke Mantee and pumped him into a couple of dozen undistinguished features, usually as (in his words) “the guy behind the guy with the gun”. A couple of these films rose above the ordinary, usually helmed by talented directors like Dead End,  with William Wyler or Kid Galahad  and Angels with Dirty Faces  with Michael Curtiz. In 1939 Bogart teamed up with a director who would change his life, the inimitable Raoul Walsh, for whom he made the excellent The Roaring Twenties  in 1939 and They Drive by Night  in 1940. In those films he played second male lead to big Warners stars James Cagney and George Raft respectively, but soon Walsh found the right role to offer Bogart his breakthrough lead, the John Huston scripted High Sierra, and Bogart never looked back.

All through his supporting actor years, Bogart was tormented by a notoriety via the very public antagonism of his third wife, Mayo Methot, and together they were known as ‘the battling Bogarts’, which only served to have him throw himself into his work. Bogart’s long history of film work and deep stage experience allowed him to embrace and exploit the huge stardom that finally arrived on the back of  High Sierra  via the remarkable The Maltese Falcon  the directorial debut of  John Huston . Warners veteran Michael Curtiz then helmed the film that immortalised Bogie in 1942, Casablanca,  one of the most perfect studio confections that Hollywood ever produced and a film that never seems to age. Bogart was ideal as the cynical and world weary anti-hero Rick Blaine, the flawed romanticist who forsakes love for duty, a new man for deeply troubled times.

Bogie succeed in many Warner programmers in the 40's, usually elevating the material by his presence and  by adopting the public persona of the cynical, tough guy that made him so popular, but his true worth was again tapped by talented directors, notably Howard Hawks and (again) John Huston. Hawks did Bogie a favour by teaming him with a 19 year old starlet in the making called Lauren Bacall, and to Hawks annoyance Bogie promptly wooed and married the young woman, his fourth and final marriage. Hawks teamed the pair in two seminal Film Noir’s,  To Have and Have Not,  and The Big Sleep,  both masterpieces of their kind. Huston paired Bogie with his dad, the veteran actor Walter Huston, in The Treasure of the Sierra Madre,  and with Bacall and the old pro Edward G. Robinson in the HUAC allegory Key Largo - after that run of superb features Bogart was simply the go to actor of his day, untouchable and iconic.

The Academy Award that had long eluded Bogie finally came his way via another primo John Huston film, the marvellous and ebullient The African Queen, in the company of screen legend Katherine Hepburn.  Bogie left Warners, initially contracting to Mark Hellinger productions, who had made a string of hits with Burt Lancaster, but Hellinger died suddenly and Bogie quickly set up a production company called Santana Productions, trying to secure his new young family’s future. The company inherited some properties from Hellinger, along with a new and talented young director called Nicholas Ray and it then made fine films with John Huston and Nicholas Ray, including one of Bogie’s very best, Ray’s brilliant Film Noir, In a Lonely Place.  He finished his acting career with fine efforts in a couple of Edward Dmytryk films, The Caine Mutiny and The Left Hand of God and with Mark Robson’s excellent boxing drama, The Harder They Fall.  Bogie, the life-long heavy smoker died of smoking related cancer at the much too young age of 57.

Humphrey Bogart has certainly left an indelible legacy as one of the most recognisable and beloved film stars in the history of cinema, and that lustre shows no signs of dimming. Bogie was the quintessential urban creature, imbued with an innate level of 'cool' before that quality was ever fully defined in the sense we understand it now - which is why his western films seem so jarring! Bogie was the antithesis of the ‘matinee idol’ star, and similarly to his great friend Spencer Tracy and to the great Jean Gabin in France, he represented the ‘ordinary’, decent man, the man who stood for integrity and substance in the face of duplicity, weakness and corruption. Bogart somehow embodied these values and that association has stood the test of time, not bad for a “last century man.”

Action in the North Atlantic
The Two Mrs. Carrolls
Passage to Marseilles
Sirocco
Knock on Any Door