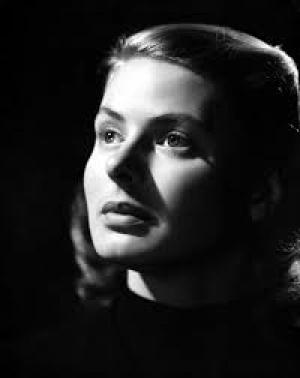 "I have no regrets. I wouldn't have lived my life the way I did if I was going to worry about what people were going to say. " ~ Ingrid Bergman

Ingrid Bergman was born in Sweden on August 29, 1915 and would die on her birthday 67 years later. She fell in love with acting during her childhood spent in Sweden and in Germany, acting in plays and films in both countries before she went to Hollywood at the invitation of producer David O. Selznick in its Annus Mirabilis, 1939. She was there ostensibly to make an English language version of Intermezzo, a film she had a hit with in Sweden, and was then due to head home, but the film was an immediate and huge success and Selznick signed her to a long-term contract. She went back to Sweden, and her husband and child, to make one more film there and returned to Hollywood and the constant work Selznick had on offer.

America and wider cinema audiences fell in love with Bergman from the start, not particularly minding the second rate fare and unimaginative directors she was quickly lumbered with, but after being loaned out to MGM for a decent co-starring role with Spencer Tracy in Dr Jekyll and Mr Hyde, she was loaned out to Warner Brothers to star opposite Humphrey Bogart in the immortal Casablanca, where her role as Ilsa Lund established her in the A-List permanently and indelibly carved her into the ranks of screen legends. Bergman was subsequently the top female star in Hollywood through much of the 1940’s, starring opposite Gary Cooper in For Whom The Bell Tolls, earning her an Academy Award nomination in 1943. She won the award in 1944 for the gothic, noir-ish melodrama Gaslight opposite Charles Boyer, directed by George Cukor and scored her third nomination in consecutive years in Leo McCarey’s fluffy but charming, The Bells Of St Mary’s, opposite Bing Crosby.

Alfred Hitchcock had a well-honed eye for a beautiful woman and cast Bergman in 3 films during the 1940’s, the first of which was psychological drama, Spellbound, opposite Gregory Peck. The filming resulted in a brief affair between the two stars and Bergman won New York Film Critics Award for Best Actress into the bargain. The second film together was their masterpiece and one of Bergman’s best performances, the stunning noir, Notorious. She plays opposite another Hitchcock favourite Cary Grant and is reunited with one of her Casablanca co-stars in Claude Rains. Hitchcock made an odd choice for their third and final film together, the antipodeans melodrama Under Capricorn, where Ingrid played an Irish-Australian Lady in colonial New South Wales. She also made the worthy but uneven historical epic, Joan of Arc, a long-held dream of hers and Victor Fleming’s last film, who was madly in love with her and professed as much to her, but unhappy as she was in her marriage it was not reciprocated. Although Joan of Arc was well received Fleming, 30 years Ingrid’s senior, died within days of its release. Affirmed by the role in the public mind as a woman of class and integrity she was interested in exploring more as an actress, and fascinated by Italian Neo-realism she wrote a letter to its primary exponent and received a fateful reply from Italian director Roberto Rossellini to come to Italy and make a film with him.

Ingrid Bergman, at the height of her natural beauty and worldwide acclaim in 1949, and as one of the most beloved women on the planet, saw it all unravel to the point she was denounced as “a powerful influence for evil” on the floor of the US Senate. She had the temerity to fall in love with Roberto Rossellini while making their first film, Stromboli, and to scandalously have a child out of wedlock with him. The couple married in 1950 once Bergman’s divorce came through and made 5 films altogether, although the mix of Bergman’s sophistication and Rossellini’s Neo-realist techniques proved an uneasy mix. The couple quarrelled endlessly on set, as Bergman attempted to make sense of Rossellini’s working methods, and does best in Voyage To Italy, opposite another seasoned pro in George Sanders. Their last film together, Fear, was more Noir than Neo-realist and a well-done examination of marital infidelity, ironic given Rossellini was a notorious womaniser, having cheated on Anna Magnani with Bergman and that during the filming both were having affairs, Ingrid with famed war photographer Robert Capa.

As Bergman was not welcome back in Hollywood, and with her marriage to Rossellini crumbling, she took the offer of her old Hollywood friend Jean Renoir, to make a period comedy, Elena And Her Men. Renoir may have hastened the dissolution of the marriage as he recommended some Indian contacts to Rossellini, who was keen to make a film in India, and promptly started an affair with one of them (and subsequently married), screenwriter Sonali Das Gupta, and Ingrid and Roberto called it quits shortly after. Renoir had told Bergman she was too big a star for him to work with in the 1940’s, and that after her career took a downturn, telling her “I’ll be there to catch you as you fall.” As good as his word he cast her in his glittering and theatrical tale of Paris during La Belle Époque, a film entirely preoccupied with the sexual possibilities that Ingrid’s Princess character faces. François Truffaut and Jean-Luc Godard were contemporary champions of the film, Truffaut writing, “The movie is about something else - about Bergman's rare eroticism, and the way her face seems to have an inner light on film. Was there ever a more sensuous actress in the movies?"

1956 was the year of Bergman’s Hollywood comeback, albeit in a European filmed project for Fox, Anastasia, directed by Anatole Litvak. Bergman was luminous as the is she-isn’t she Russian Princess opposite Yul Brynner, and promptly won a best Actress Oscar for the role, accepted by her friend Cary Grant on her behalf. Grant tapped her for a film he was producing with director Stanley Donen, and the pair enjoyed a huge hit with the London filmed Indiscreet, a witty romantic comedy. Ingrid was now fully rehabilitated in the eyes of Hollywood, i.e. she was bankable again, and Fox again cast her in the historical, quasi-epic Inn of The Sixth Happiness, directed by Mark Robson. Anatole Litvak paired her with Anthony Perkins and Yves Montand for the Paris filmed Goodbye Again, before she finally played a nasty character in making a gritty drama with Anthony Quinn, The Visit, directed by Bernhard Wicki.

The next decade saw only a handful of films, including a reunion with Anthony Quinn in A Walk in The Spring Rain, which may say more about the availability of roles for actresses in middle age rather than Bergman’s desire to work, but had a couple of distinguishing grace notes at the end of a fine career in Sidney Lumet’s Murder on The Orient Express. Bergman won an Academy Award for Best Supporting Actress for her part in an all-star ensemble, little more than a cameo, but it was a measure of the esteem and respect she was held in by her peers and acknowledgement for a body of work.

Ingrid Bergman’s career came full circle with her final feature film when she returned to Sweden to work with Ingmar Bergman, opposite Liv Ullmann in Autumn Sonata. She came to Hollywood to remake Intermezzo in 1940, where she played a concert pianist, and she went out the same way nearly 40 years later with a class performance  in Bergman’s sombre tone poem in her native language. Bergman was a rare, natural beauty in a sea of artifice and fakery and carved an indelible spot in the cinematic pantheon with her finest work, and after all, we’ll always have Casablanca, “Here’s looking at you kid.”