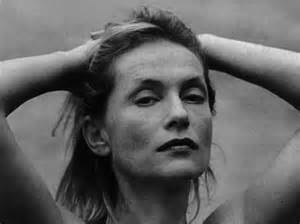 "Acting is a way of living out one's insanity."
~ Isabelle Huppert

The diminutive Parisian redhead debuted as a teen actress in French cinema in 1972 and almost immediately attracted the attention of quality directors like Bertrand Tavernier and Claude Chabrol. Success came her way very quickly via Chabrol’s excellent period thriller Violette Nozière,  for which Huppert won the 1978 Best Actress at Cannes. Since then she has gone on to become one of the most lauded and accomplished actresses on the planet, broadly under appreciated by English language audiences, but 14 César Award nominations, 2 Cannes Awards, 2 Venice Film Festival Awards as well as several other baubles speaks to the regarde incredible with which she is rightly held in Europe.

After her early Chabrol triumph, the energetic woman with the fiery eyes was soon embraced by the wider industry and whilst still in her early twenties she racked up a CV second to none, working for the legendary Jean-Luc Godard (twice), Joseph Losey, Otto Preminger, André Téchiné, Maurice Pialat, et al. Early highlights include Pialat’s Loulou,  with French (ahem) giant Gérard Depardieu, and Tavernier’s superb Coup De Torchon (Clean Slate).

Her reputation in France at least led to some American interest but she had the mixed blessing of starring in Michael Cimino’s ill-fated follow up to his masterful The Deer Hunter, the notorious film that ended United Artists as a front rank studio, Heaven’s Gate.  She continued to work through the 1990’s with several more fine films for Chabrol (Madame Bovary, La Cérémonie  and The Swindle)  as well as continuing a fruitful collaboration with Benoît Jacquot (3 films) and starring opposite the great Daniel Autiel in Christian Vincent’s visceral La Séparation.

Huppert hit a career peak in the hands of one of the greatest of modern director’s, Michael Haneke, in the astonishing La Pianiste  in 2001, delivering a mesmerising performance as the emotionally damaged music teacher. She continued immediately with François Ozon’s very fine 8 Femmes (8 Women)  with a bevy of France’s female acting elite, including Catherine Deneuve, Emmanuelle Béart, Danielle Darrieux and Fanny Ardant et al. She soon made a pair of superlative films back to back, Haneke’s post-apocalyptic and terminally bleak Time of The Wolf,  and the disturbing Ma mère  for Christophe Honoré.

Since then she has consistently starred in a succession of quality films, adorning Claire Denis’ post colonial masterwork White Material  with an unforgettable characterisation. She’s also graced the stages of Paris, New York and Sydney is a series of brilliant theatrical turns to show her astonishing range and depth. She recently triumphed once more in The Nun  for Guillaume Nicloux and Abuse of Weakness  for the tres formidable Catherine Breillat.

Isabelle Huppert may well be the finest actress of her generation, and that includes Meryl Streep, and there’s little doubt that had she been American or English she would have her name written in the stars for all time. She is a tenacious actress, fearless and determined to invest at every level in the films she makes, and her strength is her willingness to essay the dark and disturbing dimensions of the human condition. As it is she is valued by people who appreciate great films, fine artistry and indelible talent – whatever fine work the future uncovers she will remain the one and only, La Huppert.